Delhi Election Result 2020, Delhi AAP Government Formation highlights: Addressing a press conference at the party headquarters, senior party leader Manish Sisodia, who was the deputy chief minister in the outgoing government, said all cabinet ministers will also take oath along with Kejriwal at the event.

Delhi AAP Government Formation highlights: AAP supremo Arvind Kejriwal will take oath as the chief minister of Delhi on February 16 for the third consecutive time at the historic Ramlila Maidan in Delhi.

Addressing a press conference at the party headquarters, senior party leader Manish Sisodia, who was the deputy chief minister in the outgoing government, said all cabinet ministers will also take oath along with Kejriwal at the event.

Kejriwal is also likely to retain all the cabinet ministers who were part of his previous government, reported PTI quoting AAP sources.

AAP secured a second five-year term by winning 62 of the 70 seats and with a vote share of 53.57 per cent, a marginal drop from 54.34 per cent in 2015. The BJP, a distant second, won the remaining eight seats as against three in the last Assembly polls, and its vote share climbed from 32.2 per cent to 38.51 per cent. Congress drew a blank again, recording its lowest vote share — 4.26 per cent — since the first polls for the Delhi Assembly in 1993.

Arvind Kejriwal is likely to retain old cabinet, will take oath on February 16. Here are the highlights Neither offered to step down nor asked to resign after poll defeat: Delhi BJP chief Manoj Tiwari

Delhi BJP president Manoj Tiwari on Wednesday said neither has he offered to step down nor has he been asked to resign from the post in the wake of the party's poor performance in the assembly elections in the national capital. Sources, however, claimed that Tiwari had contacted a top party functionary and offered to step down as the Delhi unit chief after the BJP suffered a crushing defeat at the hands of the Aam Aadmi Party (AAP). "Neither have I been asked to resign nor have I offered my resignation," Tiwari told reporters. On Tuesday, addressing a press conference after the announcement of Delhi Assembly election results, Tiwari had said whether he continues as Delhi BJP chief or steps down is an "internal matter" of the party. (PTI)

AAP Leader Manish Sisodia celebrated his election victory with a thank you rally with residents of a locality in Patparganj area in New Delhi on Wednesday. Express Photo by Tashi Tobgyal New Delhi. 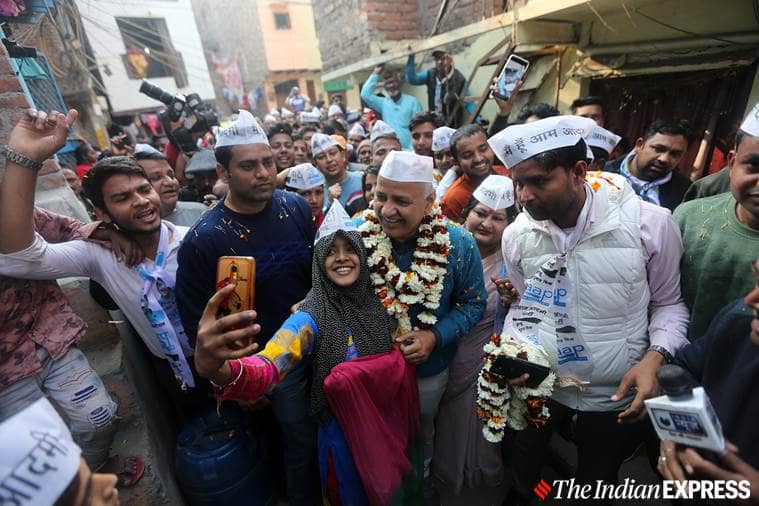 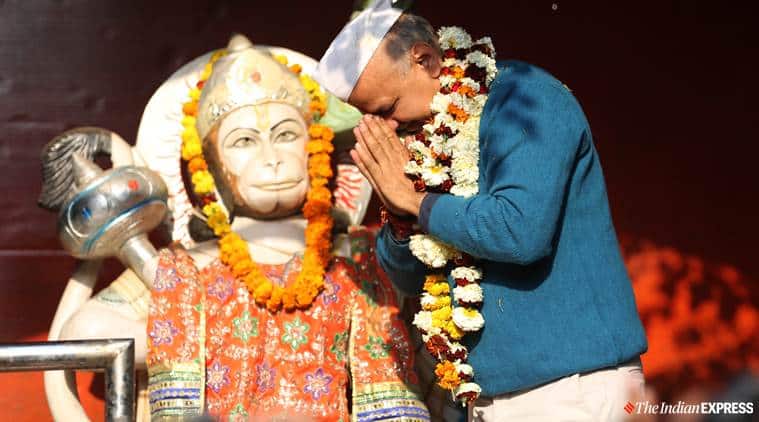 Arvind Kejriwal is likely to retain all cabinet ministers who were part of his previous government, reported  PTI quoting  AAP sources.  Manish Sisodia, Rajendra Pal Gautam, Satyendar Jain, Kailash Gahlot, Gopal Rai and Imran Hussain are likely to be retained in the new AAP government.  Kejriwal will be sworn-in as chief minister of Delhi on Sunday for the third consecutive time. The sources said that portfolios will be decided later.

A day after his party suffered a humiliating defeat in the Assembly elections, Delhi Congress chief P C Chako on Wednesday tendered his resignation to the top leadership. Congress leaders have blamed the party’s defeat on several reasons including lack of leadership, dwindling party cadre, infighting, lack of strategy and its continuous criticism of AAP and BJP.

Addressing a press conference Manish Sisodia announced that the oath-taking ceremony will take place on Feb 16. "The entire cabinet will take oath along with the CM-designate Arvind Kejriwal. The ceremony will begin at 10 AM on 16th January at Ramlila Maidan," he said, inviting the people of Delhi to become a part of the ceremony

Leading publications across the world called the election results a “stunning” defeat and setback for Narendra Modi’s party amid a polarising campaign. The report of Al-Jazeera, a Middle East publication, also centred around BJP’s divisive poll campaign not paying off in the face of Kejriwal’s pro-poor policies. US daily, The Washington Post, headlined its report as ‘Stunning defeat for Modi’s party in New Delhi elections’

Delhi: A meeting of newly-elected AAP MLAs was held at the residence of AAP chief & CM-designate Arvind Kejriwal today. He was elected as the leader of the legislative party during the meeting. He will take oath as the CM on 16th February. pic.twitter.com/X15NOVKy1O

Arvind Kejriwal is likely to be sworn-in as Delhi chief minister for the third time on February 16 at the Ramlila Maidan, PTI reported. Incidentally, it was at Ramlila Maidan that Kejriwal along with Anna Hazare led a massive anti-corruption agitation. He has taken oath as the chief minister twice before at the same venue.

Editorial: AAP scripts a win with an inclusive civic agenda as counter to BJP’s hyper-nationalism

The Delhi Assembly election result is an affirmation of the Aam Aadmi Party’s welfarist political agenda trumping the hyper-nationalist narrative of the BJP. The AAP chose to seek votes on the basis of its record in office and refused to be drawn into any debate on national issues. Calling itself a post-ideology solution-driven political group, it projected an inclusive civic agenda and claimed backing from its record in office. It defined nationalism in these terms — good classrooms and health camps make for good citizens and a secure nation. Voters were convinced.

Explained: For AAP 2.0, what is the challenge ahead?

The AAP routed its closest rival, the BJP, for the second successive time in Delhi Assembly elections on Tuesday. Many of AAP’s detractors, especially in the BJP, have repeatedly argued that AAP solely relies on offering fiscally-ruinous “freebies” to the voters and luring them. Its supporters argue that AAP’s policy choices present a new model of governance, and point out that under AAP, Delhi has not only grown faster than the India average but also increased its share to the national GDP. Have "freebies" not ruined Delhi’s fiscal health? Is the AAP model sustainable?

As the results came trickling in yesterday, speculation was rife that the next stop for AAP is national politics. As Kejriwal stood up on stage to address the crowd at party headquarters in Delhi, a slogan that read: "Join the AAP for nation development" formed the backdrop. The message could not be clearer. Having achieved the astonishing feat of bagging 90 per cent seats in two elections in a row, the AAP was now once again daring to spread wings, a desire that it had to shelve owing to successive electoral reverses, forcing it to adopt a “Delhi first” policy.

Why are we gloating over AAP win and not concerned about Congress defeat, Sharmistha asks Chidambaram on Delhi results

Even as several Congress leaders relished BJP’s loss in the Delhi Assembly elections despite the party again drawing a blank in the Delhi elections, AICC national spokesperson Sharmistha Mukherjee, daughter of former President Pranab Mukherjee, sounded a word a caution for the Grand Old Party. “Has Congress outsourced the task of defeating BJP to state parties? If not, then why are we gloating over AAP victory rather than being concerned abt our drubbing? And if ‘yes’, then we (PCCs) might as well close shop!” Sharmistha Mukherjee said in reply to Chidambaram’s tweet congratulating AAP for its stellar win in Delhi, where it bagged 62 seats.

On Tuesday, Sharmistha Mukherjee said the road ahead for the party would need more than just introspection. “We are again decimated in Delhi. Enough of introspection, time for action now. Inordinate delay in decision making at the top, lack of strategy and unity at state level, demotivated workers, no grassroots connect — all are factors. Being part of the system, I too take my share of responsibility,” she tweeted.

Delhi Chief Minister-designated Arvind Kejriwal arrived at the Raj Niwas to meet Lieutenant Governor Anil Baijal. The LG had dissolved the Delhi Assembly yesterday. "Lt Governor Anil Baijal on Tuesday dissolved the Sixth Legislative Assembly of the National Capital Territory of Delhi with effect from February 11," the official said, as counting of votes in the Assembly election is underway. "A new order will be issued for the formation of the Seventh Legislative Assembly after the final results come," the official said.

The Delhi Assembly elections was about the survival of a young party versus a referendum on the Centre’s policies. The campaign itself was a study in contrast, with the AAP keeping the focus on showcasing its achievements over the past five years and the BJP raising the pitch on national issues such as the new citizenship law, Article 370 and the Ram temple.

As the campaign progressed, anti-CAA protests at Shaheen Bagh became the focal point of the BJP attack, with top leaders accusing the AAP and Kejriwal of fuelling dissent and feeding protesters “biryani”. The AAP maintained distance on the issue, with the CM telling The Indian Express in an interview that “everyone has the right to protest but not to inconvenience other people. If you will block a road and cause pain to so many people, it will not be acceptable in any democracy, any society. Gandhiji would not have accepted this either”.  As for the Congress, which ruled Delhi between 1998 and 2013, it has slipped out of conversations, except among a few long-time supporters.

After the pooer performance, Congress leader P C Chacko admitted that the party is on a downhill in the capital. "The downfall of the Congress party started in 2013 when Sheila ji was the CM. The emergence of a new party AAP took away the entire Congress vote bank. We could never get it back. It still remains with AAP," he said, news agency ANI reported

Delhi election results: How were the numbers stacked Overcoming a high-octane divisive BJP campaign right in the middle of anti-CAA protests that rocked the Capital, Arvind Kejriwal and his Aam Aadmi Party returned to power in Delhi Tuesday for a second five-year term at the head of another landslide.

“This (AAP’s victory) is a great message for not just Delhi, but the country. This politics of work will take India to the 21st Century. This victory is not just of Delhi people, but that of Bharat Mata. This is a victory for the entire country,” Arvind Kejriwal said. The CM was flanked by his wife Sunita Kejriwal, who could not have asked for a better birthday gift. Rajya Sabha MP Sanjay Singh and AAP national secretary Pankaj Gupta stood smiling, with the party’s Delhi convenor Gopal Rai and Raghav Chadha.

As significant as what the CM said was what he did not say: The speech did not target the BJP or its leaders, who have over the past month repeatedly targeted Kejriwal. This is in line with his new approach to politics, where he has tried to keep the focus on governance and avoid direct confrontations with opponents.

Behind him, a slogan on the flexes read: "Join the AAP for nation development." The message could not be clearer. Having achieved the astonishing feat of bagging 90 per cent seats in two elections in a row, the AAP was now once again daring to spread wings, a desire that it had to shelve owing to successive electoral reverses, forcing it to adopt a “Delhi first” policy.

🔴 In 8 seats BJP won, 2 go to incumbents, Congress had little role to play

🔴 From ‘achhe beete paanch saal’ to black and yellow colours, how I-PAC left its imprint