Congress-JDS alliance, Karnataka election results 2018 LIVE: HD Kumaraswamy could well be made chief minister if the Governor invites the alliance to form government in the state.

The political drama in Karnataka reached the doorsteps of Supreme Court on Wednesday midnight after the Congress-JDS alliance challenged Governor Vajubhai Vale’s invitation to the BJP to form the new government in the state. The apex court, however, refused to stay the oath-taking ceremony of Yeddyurapaa but added that the government formation in the state would, however, be subject to the final outcome of the case before it. The matter is again listed for hearing on Friday.

Calling it a ‘diabolical conspiracy to denigrate democracy,” the Congress and JDS moved the Supreme Court late midnight to quash the order and declare it as “unconstitutional, arbitrary, illegal, void-ab-initio, and violative of Article 14 of Constitution of India”. Abhishek Manu Singhvi, representing the Congress argued that the Governor must have invited the post-poll coalition to form government as no single party had secured a majority. He questioned the 15 days time given to Yeddyurappa for proving majority saying the Supreme Court had earlier said “to give such time is to encourage the constitutional sin of poaching…”. KK Venugopal arguing for the Centre, said that a floor test was the best to know if the Governor’s decision was right. “We don’t know what happened in exchanges between Governor and Yeddyurappa, or what he has said in his letter,” he said.

The BJP with 104 seats emerged as the single largest party in the elections, but fell short of majority. The Congress has 78 seats, and the JD(S) with 37 — joined hands together to keep BJP at bay. Together they have 117 seats (with the support of 1 BSP and 1 Independent).

Read | While you were asleep: Here’s how the Karnataka battle unfolded in SC

Here are the highlights on Congress-JDS alliance in Karnataka. We bring you fastest and real-time updates in Malayalam, Bengali and Tamil.

Governor said he would act as per Constitution, says state Congress chief

Addressing a press conference, Kumaraswamy said he told the governor that if they were not allowed to form the government in Karnataka, they would be forced to explore legal options. In a letter to Governor Vajubhai Vala, 115 MLAs have signed in support of JD(S). However, Congress' Anand Singh was not among the signatories, fuelling suspicion of horse-trading. However, Congress said the party was in touch with Singh. State Congress chief Parameshwara says Vala assured them he would act as per Constitution, Supreme Court judgments and precedents.

All the 78 MLAs of the Congress and 37 MLAs of JD(S) along with HD Kumaraswamy have reached the Raj Bhavan. Meeting with Governor Vajubhai Vala ends. Congress MLAs have given to the governor in writing about their support to JD(S). However, reports said the governor has refused to accept the parading of MLAs by the two parties. Governor has given us the assurance that he will take the decision based on the constitution, says Kumaraswamy after meeting with Vajubhai Vala. The JD(S) leader says party MLAs are safe.

HD Kumaraswamy and 37 JD(S) MLAs reach Raj Bhavan to meet Governor Vajubhai Vala. Amid hectic jockeying over government formation in Karnataka, Kumaraswamy, earlier in the day, claimed the BJP offered his MLAs Rs 100 crore in bribes to break away and back the BJP in government formation. (Express photo by Manoj Kumar) 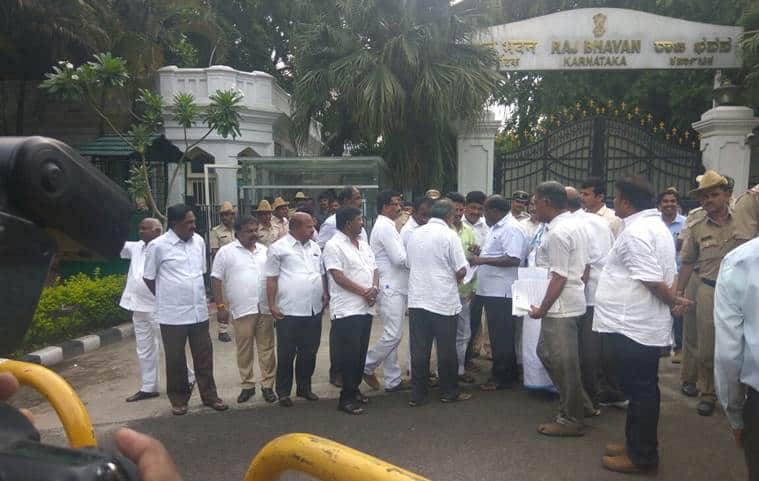 While Congress MLAs are approaching the Raj Bhavan in a bus, HD Kumaraswamy is also leading a delegation to meet Governor Vajubhai Vala. All eyes are now on Vala, who has the discretion to invite any leader to form the government. But he must make a choice keeping in mind the leader’s ability to prove his majority on the floor of the House, and to provide a stable government.

According to latest reports, Congress MLAs are being taken to the Raj Bhavan and is scheduled to meet Governor Vajubhai Vala at 5 pm.

No governor can go against Constitution, says Ghulam Nabi Azad

Congress leader Ghulam Nabi Azad, who has been camping in Bengaluru since Sunday, said they have been seeking an appointment with Governor Vajubhai Vala since 12 noon but haven't received any message. "Since 12-12.30 pm, we are seeking appointment with the Governor to handover two letters - one of legislator party of Congress another of legislator party of JD(S). We haven't received any message from Governor so far," he said. When asked if Congress would take the legal route, Azad said stealing of MLAs shouldn't be allowed and asserted that the governor could not go against the Constitution. "Stealing of MLAs shouldn't be allowed. No governor can go against Constitution. We can't tell you whom we'll approach and whom not. At this juncture we've complete faith in governor that he'll go by Constitution and not party politics," he said.

MLAs who switch parties should be banned from elections for one term, says Omar Abdullah

Congress and JD(S) MLAs may sit on a dharna outside the Karnataka Raj Bhavan from Thursday if the parties are not invited by Governor Vajubhai Vala. Meanwhile, former Jammu and Kashmir chief minister Omar Abdullah said MLAs who switch parties should be banned from contesting elections for one term in order to prevent horse-trading in the event of a hung house. "Simply disqualifying defecting MLAs isn't enough to stop horse trading since most of them come back with a mandate of their newly-discovered party. They should be barred from fighting elections for a period of not less than one term," he tweeted.

Odisha: Voting underway in bypoll to Brajrajnagar Assembly segment
All in yellow, Bhagat Singh village awaits ascension of Bhagwant Mann as CM
Sawant to meet PM, Shah, Nadda today over govt formation in Goa
BJP to decide on Uttarakhand CM after Holi
After Punjab, AAP all set to venture into Haryana
More from Elections >>

Signatures of JDS and Congress MLAs being taken in support of HD Kumaraswamy. The document will be submitted to the Governor later today. #Karnataka pic.twitter.com/Ivm6wPpvqA

BJP's Prakash Javdekar called the poaching charges against BJP "baseless" and added that the Congress is famous for it. "Rs 100 crore figure is not only imaginary but it is what Congress-JDS do politics through. Their own MLAs are not happy with the alliance. We are going by rules, we have submitted our claim to the Governor, are confident of forming the govt," he added.

Meanwhile, sources also suggest that the Congress-JDS alliance is planning to parade its MLAs all the way to the Raj Bhavan in a show of its strength

They (BJP) keep on calling but we don't bother about it. I have clearly asked them not to call me. I am a committed Congress person.They have been doing this from long time. This is their job: TD Rajegowda, Congress MLA on being asked if BJP had approached him. #KarnatakaElection pic.twitter.com/xFd8VK3UnR

Kumaraswamy also said that he has not asked for the chief ministerial post in the cabinet in exchange of support to Congress and added that he will again approach the Governor with the G Parameshwara, state Karnataka Pradesh Congress Committee President

Who is Javadekar? Who is that gentleman?: HD Kumaraswamy, on being asked if he had met BJP Karnataka in-charge Prakash Javadekar. #KarnatakaElections2018 pic.twitter.com/hFkvczlFtQ

Adding that both the BJP and Congress approached him for alliance he said owing to his previous experience with the saffron party, he feels he has caused "damage to Deve Gowda's secular image."I have been offered from both sides. I am not saying this loosely. There's a black spot on my father's career because of my decision to go with the BJP in 2004 & 2005. So God has given me an opportunity to remove this black spot. So I am going with Congress," he said, adding that he believes that only JD(S) can stop BJP in Karnataka.

Amid report of poaching of MLAs, Kumaraswamy in a warning to the BJP said, "It will boomerang if you try operation Kamala. If you try such things we will bring twice the numbers of your MLAs into our fold." He also added that the BJP has been trying to contact JD(S) MLAs since last night. "I request the governor not to allow any horsetrading."

No alliance with BJP: Kumaraswamy

JD(S) leader Kumaraswamy reiterated his support to the Congress party and dismissed all reports of an alliance with BJP. 'We will not support BJP. There is no question of any alliance with the BJP. People don't want BJP in Karnataka. We thank people for their support,' he said, addressing the media after the legislative meet. He also claimed that the saffron party offered Rs 100 crore to JD(S) leaders to switch sides. "JD(S) MLAs are being offered Rs 100 crore each. Where is this black money coming from? They are supposedly the servers of poor people and they are offering money today. Where are the income tax officials?" he asked

When it comes to proving the majority, party has to show numbers, we will do that for sure. I can't speak openly but we will definitely prove the majority. It is BJP who was given the mandate by people: Bhagwanth Khuba, BJP #KarnatakaElections2018 pic.twitter.com/IG6M7Ck1OT

HD Kumaraswamy has been chosen as the legislative party leader of the JD(S) in its party meeting in Bengaluru. 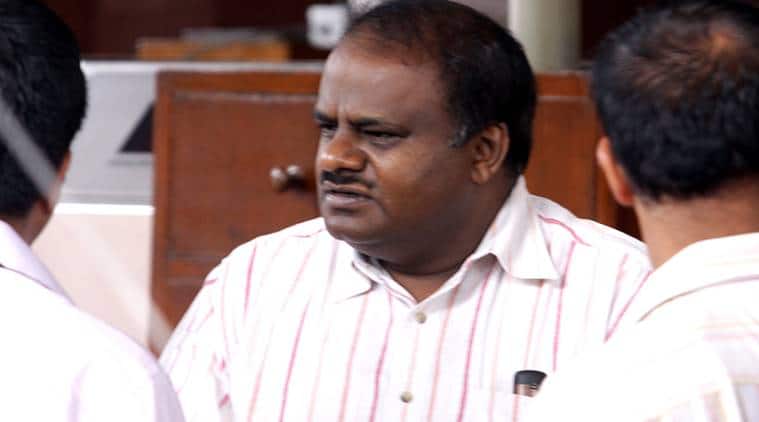 After meeting the Governor, BJP's CM candidate BS Yeddyurappa said, "The party has chosen me. I have given the letter to the Governor & he will call me, that is what I am hoping. He told me that he will take an appropriate decision. I'll inform you after I receive the letter from Governor." (Express photo by Manoj Kumar) 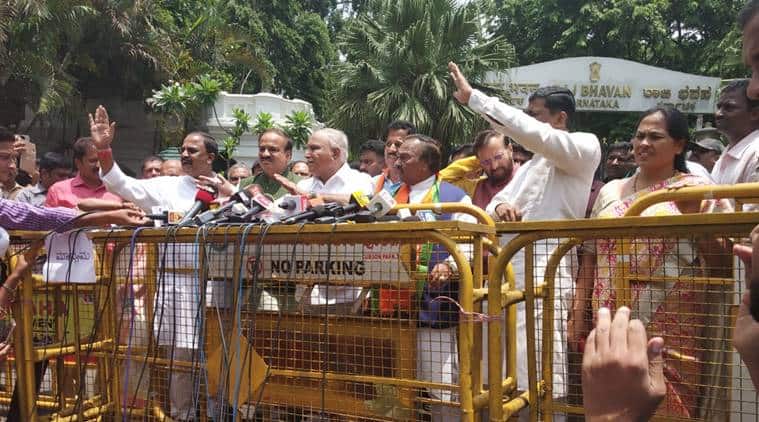 'People want HD Kumaraswamy to be the CM'

Meanwhile, 66 out of 78 Congress MLAs reached the party's meeting in Bengaluru.

It has been a dramatic twist of events in the Karnataka Assembly election results. In the first few hours of counting it appeared that the BJP would emerge not just as the single largest party but with a majority. However, its numbers slowly began reducing and at around 5 pm hovered around 105, eight short of crossing the halfway mark.

In the afternoon, the Congress announced that it was forming an alliance with the Janata Dal (Secular) and that it would offer its unconditional support to the party. Senior party leader Ghulam Nabi Azad told reporters that he had a word with Deve Gowda and Kumaraswamy and that they have agreed to form government.

Kumaraswamy, too, confirmed the development and wrote a letter to Governor Vajubhai Vala seeking an appointment at 5.30 pm as he had the required numbers.

The BJP, not wanting to be left out, has rushed to Raj Bhavan with Yeddyurappa claiming he has an appointment with the Governor at 5 pm. Follow this LIVE blog as we bring you the latest updates from Bengaluru.