“Since 2014, we have established close relations with Islamic nations such as UAE, Saudi Arabia, Bahrain”, Modi said adding that Saudi Arabia has also included “yoga in its official syllabus”. 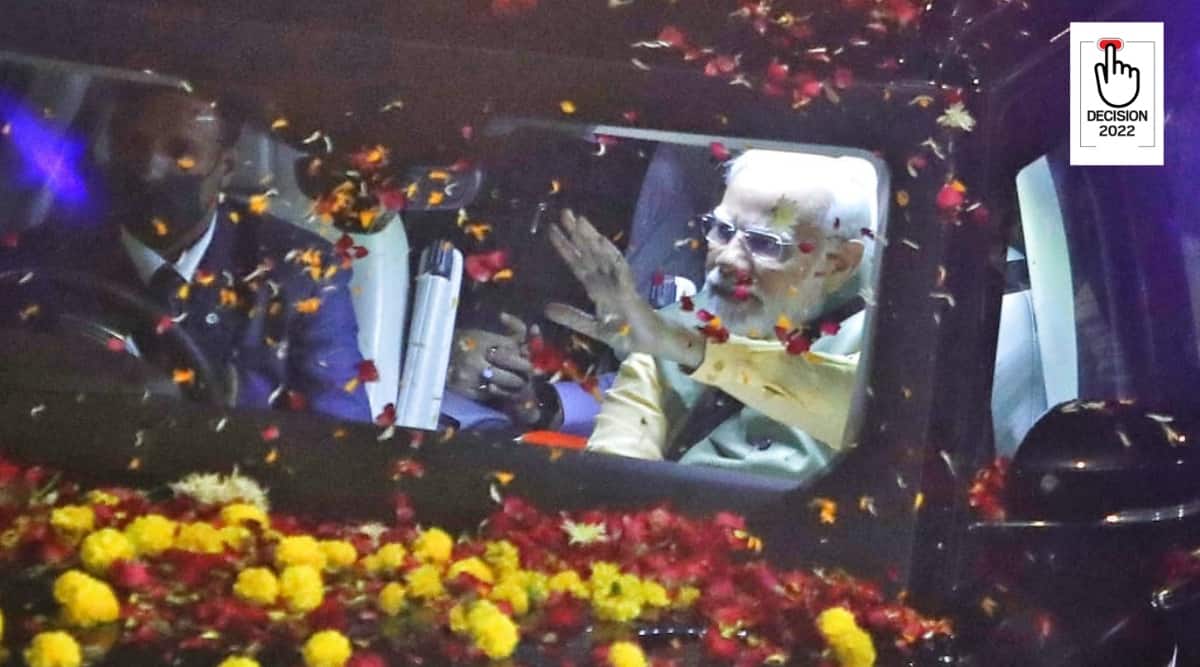 Prime Minister Narendra Modi Friday said that India has established close relations with the Islamic nations since he assumed power in 2014.

The Prime Minister was speaking at a public address at Saraspur in Ahmedabad, a day after the Phase 1 of polling for Gujarat Assembly elections concluded.

The Neerja Chowdhury Column |As Modi insulates BJP from defeat, on Gujarat ground, voices for change mention Kejriwal — and the future

“Since 2014, we have established close relations with Islamic nations such as UAE, Saudi Arabia, Bahrain”, Modi said adding that Saudi Arabia has also included “yoga in its official syllabus”.

“In Bahrain and Abu Dhabi, temples are being made for India’s Hindus,” he added.

During his last campaign speech before the Phase-2 polling in Gujarat on December 5, the Prime Minister said that Congress has started cursing EVMs, which means “that BJP is going to see an unprecedented win.”

“The first phase has decided that BJP is going to see an unprecedented win. Not because I‘m saying this, Congress too is saying that… For two days..Congress has been continuously verbally abusing/cursing EVMs…EVM this, EVM that. When Congress starts abusing/cursing (gaalo bolvanu sharu kare), then you’ve to understand that…their game too has ended in the first phase only,” he said during the public address after which he paid tribute to a statue of Babasaheb Ambedkar and a visit to Maa Bhadrakali temple in the walled city.

Congress media department head Pawan Khera Wednesday at a press conference in Ahmedabad had alleged that the Central forces have been instructed to stay 1.5 km away from booths in Gujarat and only Gujarat police and home guards will take care of EVMs, which will have to be transported to the counting centres.

Stressing that Gujarat presents a model for the country, Modi also enlisted several developmental indicators, and claimed that Gujarat topped all of them.

“In 1947 when India got independence, we were sixth among the world’s economies. In 2014, until when Congress ruled, we had reached the 10th spot. In 70 years, Congress’ policies resulted in a decline of economic position in the world from 6th to 10th… In 2014, I went to Delhi, BJP government was formed, a new attempt of awareness was brought in with sauni saath, sauni vikas…In 8 years, we brought the economy back to 5th position from 10th,” he said.

Modi added, “Under Congress rule, if any terror incident took place, they had to call for help from the world. Today under the BJP government, the army is going in the homes of terrorists and killing them. Today India does not beg for help but rather raises its hand to help the world.”

Taking on Congress on the Narmada Dam project, PM Modi asked in Banaskantha’s Kankrej that whether people will forgive Congress for the “sin” of stopping water for them.

“BJP has continuously worked on irrigation projects but Congress’ policy is latkaana, atkaana aur bhatkaana (delay, stop and misguide). Ask 70-80 years old seniors in your family if they have heard about Narmada when they were young. They will say yes. Ask them if all Congress governments had assured them that Narmada water will come, they will say yes. But no one brought Narmada water,” the PM stated.

Taking a jibe at Congress for halting irrigation projects across the country PM said, “In 2014, you all sent me to Delhi where I got to see files to know why country is in such a condition. First of all I looked at farmers’ issues… I checked for water and you will get hurt to know that those who ruled for so many years stopped 99 major irrigation projects midway for around 30 years… I restarted all these stalled projects. Rs 1 lakh crore is being spent on 99 irrigation projects which are started again so that farmers get water.”

Addressing a public gathering in Sojitra in Anand district — which is associated with Sardar Patel as he grew up in Karamsad in Anand— Modi blamed the Congress for “discarding Sardar Patel”.

Urging voters to ask Congress leaders why they have not visited the Statue of Unity in Narmada district to pay their tributes, Modi said that Secretary-General António Guterres, on his recent visit to the Statue of Unity had called it a “fulfilling experience of his life”.

Modi said, “Congress has a problem with Sardar Patel because their ideologies do not match. Congress’ ideology was to divide and rule but Sardar Patel stood for unity. So they don’t consider Sardar Patel as their own… When Congress comes by to seek votes, ask them a few questions from me. Ask them whether Sardar Patel was ever a part of the Congress. And, finally, ask them, Have they ever paid tribute to the Statue of Unity dedicated to Sardar Patel?”