Congress has announced candidates for 86 of the 92 seats it is contesting in the Kerala Assembly polls. Candidates for the remaining six seats will be declared after further discussions with the national leadership, state party president Mullappally Ramachandran said. 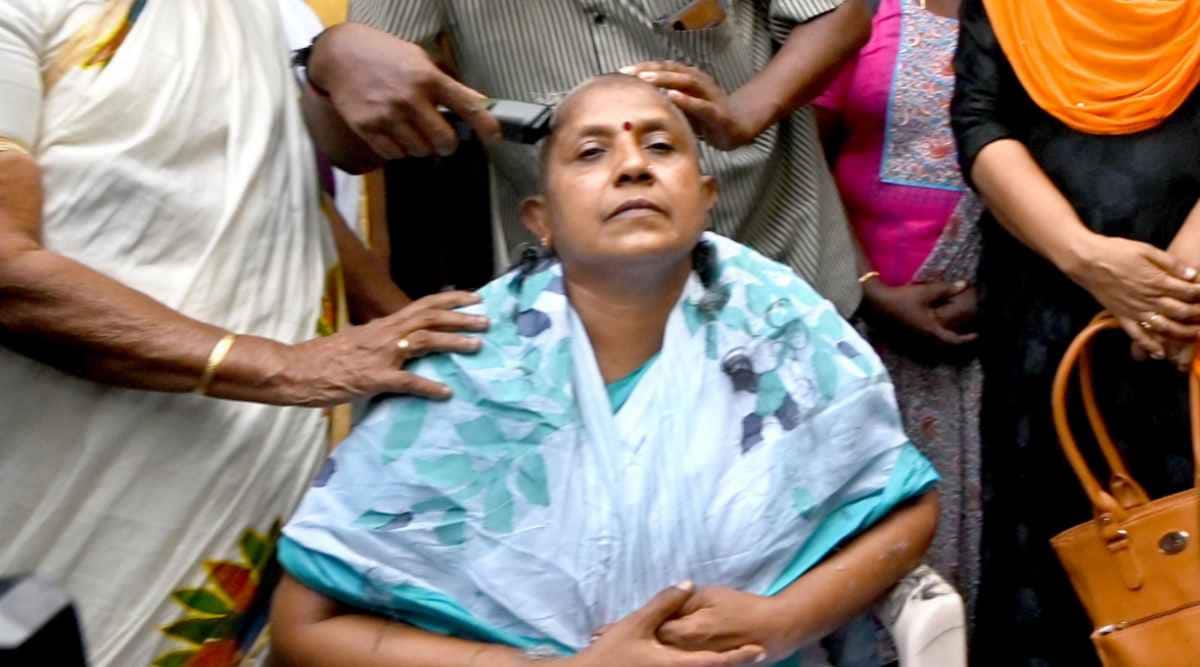 Kerala Mahila Congress chief Lathika Subhash tonsured her head in protest against inadequate representation of women in the candidate list.

After weeks of heated deliberations, Congress Sunday announced candidates for 86 of the 92 seats it is contesting in the Assembly elections in Kerala. Candidates for the remaining six seats will be declared after further discussions with the national leadership, state Congress president Mullappally Ramachandran said in New Delhi.

The party has fielded most of its sitting MLAs, along with giving tickets to a host of familiar faces who had fought the previous Assembly elections unsuccessfully, giving the impression that the party’s ‘A’ and ‘I’ factions have once again managed to push their favourites. At the same time, the party has brought in a set of new faces, particularly in the north Kerala belt, where it fared miserably against the CPI(M) in 2016.

The highlight of the candidate list is the nomination of senior leader and Vadakara MP K Muraleedharan from Nemom, the only seat the BJP holds in the outgoing Assembly. By fielding Muraleedharan, former state president of the Congress and son of former chief minister late K Karunakaran, the party has fulfilled its promise of bringing a heavyweight candidate to fight the BJP. In 2016, BJP’s O Rajagopal had won the seat by over 8,000 votes.

Though former chief minister Oommen Chandy’s name also did the rounds for Nemom, the party decided against it ultimately, fielding him once again from his pocket-borough of Puthuppally in Kottayam district. He has represented the constituency for 14 terms consecutively since 1970.

However, in a major embarrassment for the party, Mahila Congress state chief Lathika Subhash resigned from her post and tonsured her head in front of the state party headquarters in Thiruvananthapuram, to protest against the inadequate number of women candidates in the list. In an emotional statement to the media, she said the women’s wing of the party had worked tirelessly during every election even as the party continued to sideline them. The 56-year-old said she was disappointed by the party’s decision not to give her the ticket from Ettumanoor, her hometown in Kottayam district.

Though the central leadership had asked the state unit to field at least one woman candidate in each of the 14 districts, the list of 86 names on Sunday had just nine women candidates. Adv Shanimol Usman from Aroor and Bindu Krishna, the Congress president of Kollam district, are among the notable women on the list. It’s unlikely that Subhash, or any other woman leader, would be considered for the six remaining seats where the party has not announced its candidates.

When asked about Subhash’s exclusion from the list, Ramachandran told reporters, “She had asked for the Ettumanoor seat. But we had to give the seat to our ally, Kerala Congress (Joseph). There was never any reason to sideline her. Now, that the list is out, there isn’t any chance for reconsideration.”