The Congress ended Raman Singh’s dream of a fourth-tenure in Chhattisgarh, by bagging 68 seats in the 90-member Assembly. The BJP, meanwhile, secured 15 seats. Taking moral responsibility for the BJP’s defeat in the state Assembly elections, Chief Minister Raman Singh on Tuesday tendered his resignation to the Governor. “This will not reflect on the 2019 Lok Sabha election,” he said.

Much of the focus now is on who will the Congress field as the new CM of the state. Leader of Opposition T S Singh Deo, is widely considered as the frontrunner. The newly formed Ajit Jogi-Mayawati alliance, which was considered as the third front in the state, managed to win 5 seats.

Chhattisgarh Assembly Elections 2018 Results: Congress is all set to form a government in the state after 15 years. Read highlights in Hindi, Malayalam, Tamil, Bangla

Counting has finally concluded in Chhattisgarh. The Congress has snatched the state away from the ruling BJP with 68 seats in its kitty. With this, the party is all set to form a government in the state after a gap of 15 years

Congress is set to form a government in BJP, with an absolute majority. Even as the counting on a seat is underway, the Congress is comfortably past the halfway mark and has won 67 seats.

In an embarrassment to the ruling party, eight ministers of the BJP lost. Home Minister Ramsevak Paikra was defeated by the Congress's Premsai Singh Tekam by 44,105 votes, Sports and Youth Welfare Minister Bhaiyyalal Rajwade suffered defeat at the hands of Congress's Ambika Singhdeo, hailing from the erstwhile royal family of Koriya, at Baikunthpur by 5,339 votes. Urban Administration Minister Amar Agrawal was defeated by the Congress's Shailesh Pandey by 11,221 votes at Bilaspur. Public Works Department Minister Rajesh Munat suffered loss to the Congress's youth leader, Vikas Upadhyay, by 12,212 votes in the Raipur City West seat.

Chhattisgarh: A complete wipe-out of BJP from the state

In chhattisgarh,ECI update at 1 15 am says Congress has won 67 seats. 5 to Jogi, 2 to BSP and 15, a complete wipeout for the BJP. Only one seat, Takhatpur still left to declare. Congress leads there too @IndianExpress

In Bastar district, Congress' Baghel Lakheshwar was declared as the winner after he secured 74,378 seats. The Raigarh seat too went to the Congress after its candidate Prakash Shakrajeet Naik secured 69,062 votes. 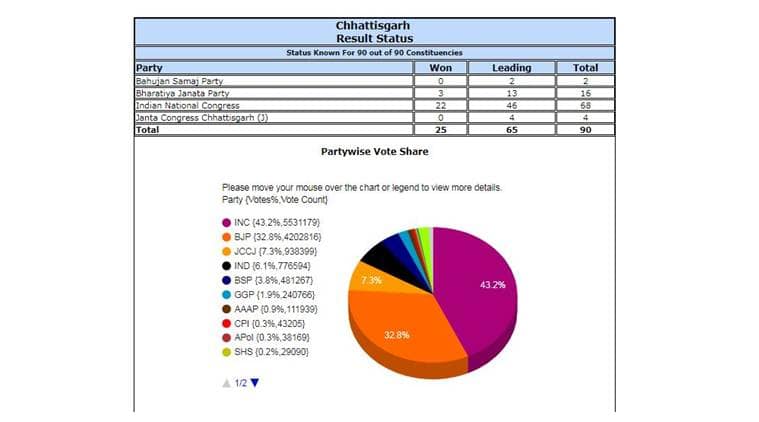 Will work for development of Chhattisgarh: TS Singh Deo

Speaking to reporters, TS Singh Deo said, "Such a huge mandate indicates that the people have a lot of expectations from the Congress. The victory that we have got will bind us with the public. Our party will definitely face challenges and work for the development of the public." 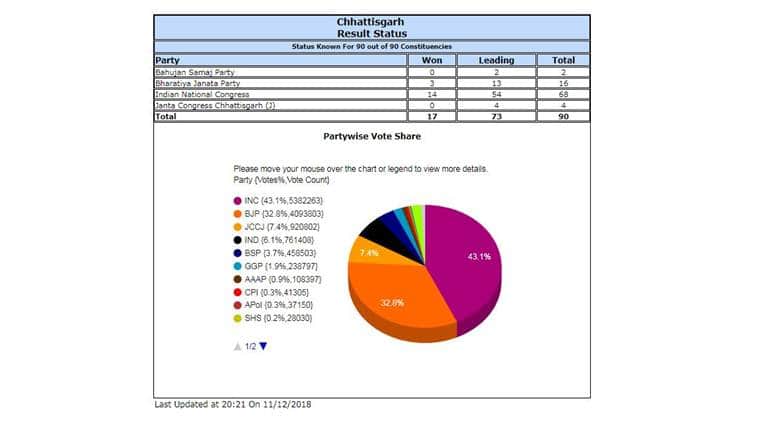 Addressing the media in the national capital on the party's victory in the elections, Rahul said, "We have defeated BJP in Rajasthan, Madhya Pradesh and Chhattisgarh." 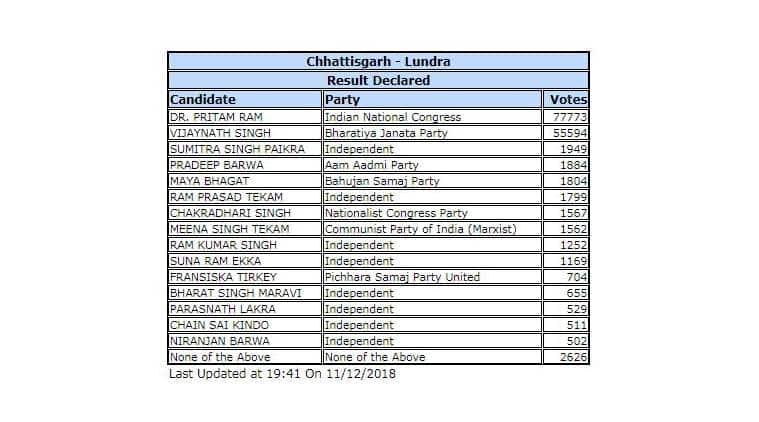 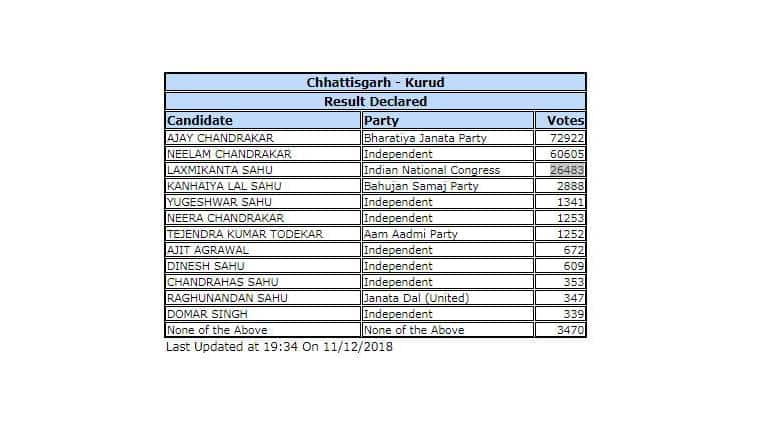 Where do the key leaders stand? Chhattisgarh Assembly Elections 2018 Results: Despite a bandh call given by Maoists in Chhattisgarh, over 75 per cent voter turnout was recorded in the state. Polling took place in two phases - November 12 and 20 to elect a new 90-member assembly.

Three-time Chief Minister Raman Singh is being challenged by Karuna Shukla, niece of late Prime Minister Atal Bihari Vajpayee. Speculation is rife that Congress might join hands with the BSP-JCC-CPI alliance to pull the rug from under the BJP’s feet in the state.

During the 2013 elections, the BJP had won 49 seats, while the Congress bagged 39. One seat each, meanwhile, was bagged by the BSP and an independent. The polling percentage in 2013 was higher than the turnout in 2018 by over 1.05 percentage points.