Analysis of the results shows that turnout of women was higher than men in 166 of total 243 constituencies. 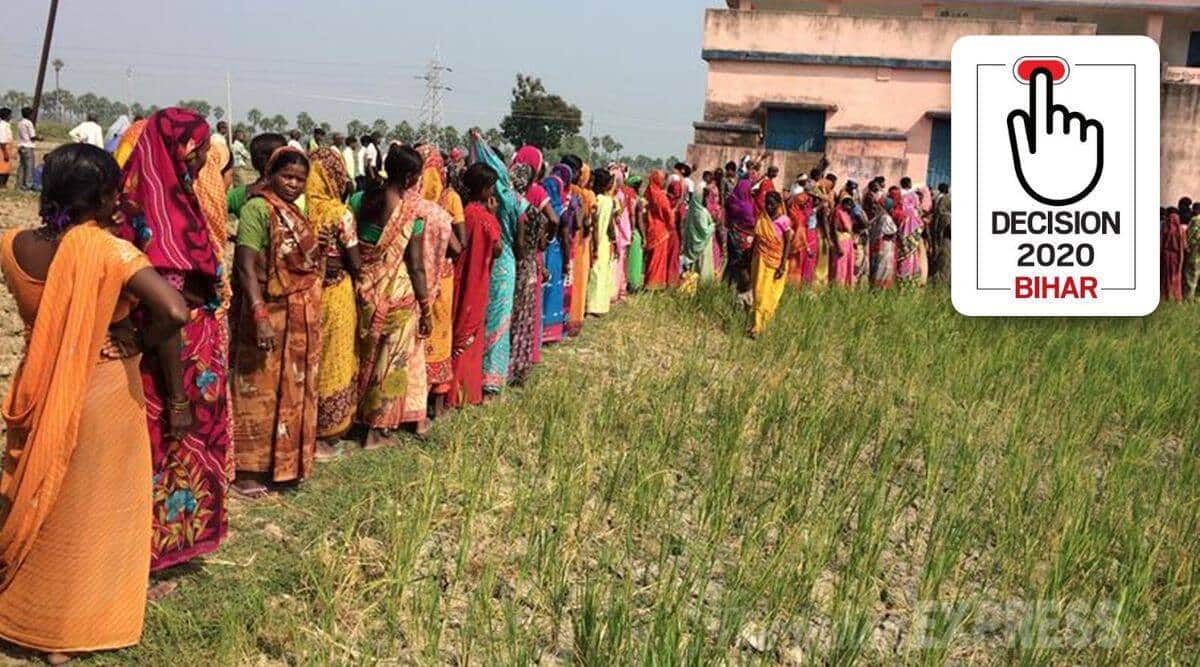 Women voters seemed to have come to the help of NDA partner Janata Dal (United), too, as 37 of the party's 43 wins came from these constituencies.

Out of 125 seats the NDA won in Bihar Assembly elections, 99 came from constituencies that saw higher voting percentage of women than men, according to election data.

Analysis of the results shows that turnout of women was higher than men in 166 of total 243 constituencies.

Of these 166 constituencies, BJP bagged the most – 55; the party’s overall tally was 74. Women voters seemed to have come to the help of NDA partner Janata Dal (United), too, as 37 of the party’s 43 wins came from these constituencies.

In contrast, the opposition Mahagathbandhan (MGB) won a fewer number of its seats – 60 – in these 166 constituencies, led by RJD with 44 (see box for detailed break-up). The alliance won 110 seats in all in these polls. 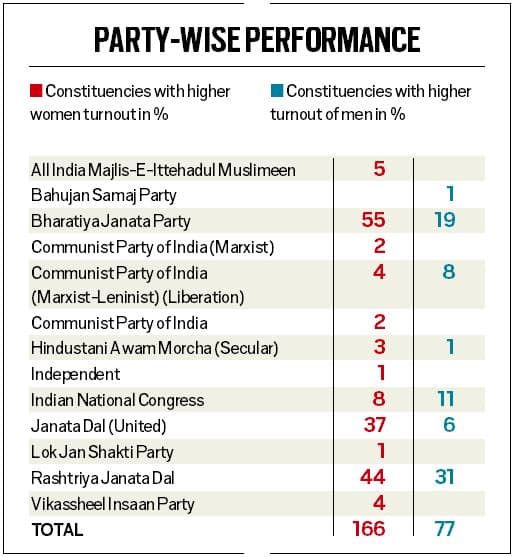 Other parties outside the two main alliances which got seats in these constituencies with higher women turnout percentage are the Asaduddin Owaisi-led AIMIM (5 seats) and Chirag Paswan-led Lok Janshakti Party (1 seat), aside from one Independent.

The three-phase Bihar Assembly election recorded an overall 57 per cent polling, with voting by women registering a markedly higher percentage – 59.69 – against 54.68 per cent polling by men.

In fact, AIMIM won all its five seats from constituencies that recorded higher turnout per cent by women.

Although Bihar saw a very high turnout of women voters in this month's Vidhan Sabha polls – 59.69 per cent – this was still nearly a percentage point lower than the stats five years ago. Over the last four Assembly elections in Bihar, voting by women has seen a steady rise. In 2015, they overtook their male counterparts by a huge margin, with 60.48% women turning out to vote against 53.32% men. Turnout among women in 2015 was the highest in Bihar going as far back as 1962. Overall turnout that year was 56.66%. Bihar's sex ratio is 918, below the national average of 940, as per census 2011.

The average victory margin in these 77 constituencies was higher (17,734 votes) than ones that saw higher percentage of women voting (16,403 votes).

In comparison, 49.94 per cent men (1.40 crore) turned out to vote in February 2005, with the needle moving slowly to 53.32 per cednt in 2015 and 54.68 per cent this year. Overall voter turnout in February 2005 polls was 46.5 per cent. Due to the fragmented result, elections were necessitated again in October that year, but despite expected voter exhaustion, more women turned out to vote – at 44 per cent (1.06 crore total) – compared to earlier that year.