The NDA pulled ahead with 125 seats against the Grand Alliance’s 110 in the 243-member Assembly. For the NDA, Nitish Kumar 4.0 still looks probable despite the JD(U)’s slide to 43 seats.

Addressing enthusiastic BJP workers following the victory of NDA in Bihar and impressive show in the bypolls, Prime Minister Narendra Modi on Wednesday said the saffron party now had its footprint across the country and the results had made it clear that people would now support only those who work honestly for development.

“Polls results have endorsed the way we have tackled Covid-19 pandemic. No re-polling and peaceful conduct of voting were the distinctive features of Bihar elections. Earlier there used to be news of booth capturing,” Modi said. The PM, who was joined by Home Minister Amit Shah, Rajnath Singh and JP Nadda on the dais, said the election was a victory of the development works in Bihar. He also underlined that BJP was the only national party in which poor, dalits, deprived see their representation. Interestingly, there was no mention of either Nitish Kumar or JD(U) in his speech.

Meanwhile, in his first reaction on the Bihar poll win, Nitish Kumar said, “I salute the public for the majority it gave to the NDA. I thank PM Narendra Modi for his support.” Earlier today, hours after the NDA was declared a winner in the Bihar polls, Chirag Paswan’s Lok Janshakti Party said his party will not support Nitish Kumar. “If he continues to become the Chief Minister of my state, there will not be my support at the state level…We will continue supporting PM Modi at the centre,” Paswan said.

In a nail-biting contest that went down to the wire, the NDA edged past the Mahagathbandhan to win the Bihar elections, with the BJP emerging as the dominant partner for the first time in about two decades. Finally, with trends firming up by 11 pm, the NDA pulled ahead with 125 seats against the Grand Alliance’s 110 in the 243-member Assembly. For the NDA, Nitish Kumar 4.0 still looks probable despite the JD(U)’s slide to 43 seats. The RJD, on the other hand, emerged as the single largest party, winning 75 seats, one more than the BJP which won 74. Although the Left parties won 16 out of the 28 seats that they contested, the Congress’ lackluster performance proved costly for the Opposition. The grand old party could only win 19 seats out of the 70 it contested.

After a nail-biting contest, NDA edges past Mahagathbandhan; BJP emerging as the dominant partner, while RJD is the single-largest party.

PDP president Mehbooba Mufti congratulated RJD leader Tejashwi Yadav on Wednesday on his party's performance in the Bihar Assembly election, saying he set the agenda on real issues in the polls as opposed to "divisive" politics.

Congratulations @yadavtejashwi for setting the agenda on real issues in Bihar polls as opposed to divisive politics. Despite being a one man army you put up a tough fight. Im sure you’ve made Laloo ji proud & there will be victories ahead inshallah

Senior BJP leader Uma Bharti said on Wednesday that her party became the “elder brother” in the NDA alliance in Bihar only through the “ladder” of Chief Minister Nitish Kumar. She was speaking to reporters here a day after the BJP won more seats in Bihar Assembly elections than its ally, Kumar-led Janata Dal (United).

When asked should there be a BJP chief minister in the northern state now, Bharti said, “I don’t want to get into this.”

“The election was contested under the leadership of Nitish Kumar, and you will recall that his leadership had been announced by me in 2005 when I was BJP general secretary in-charge of Bihar. And we were able to form a government there,” she said. Click here to read more. 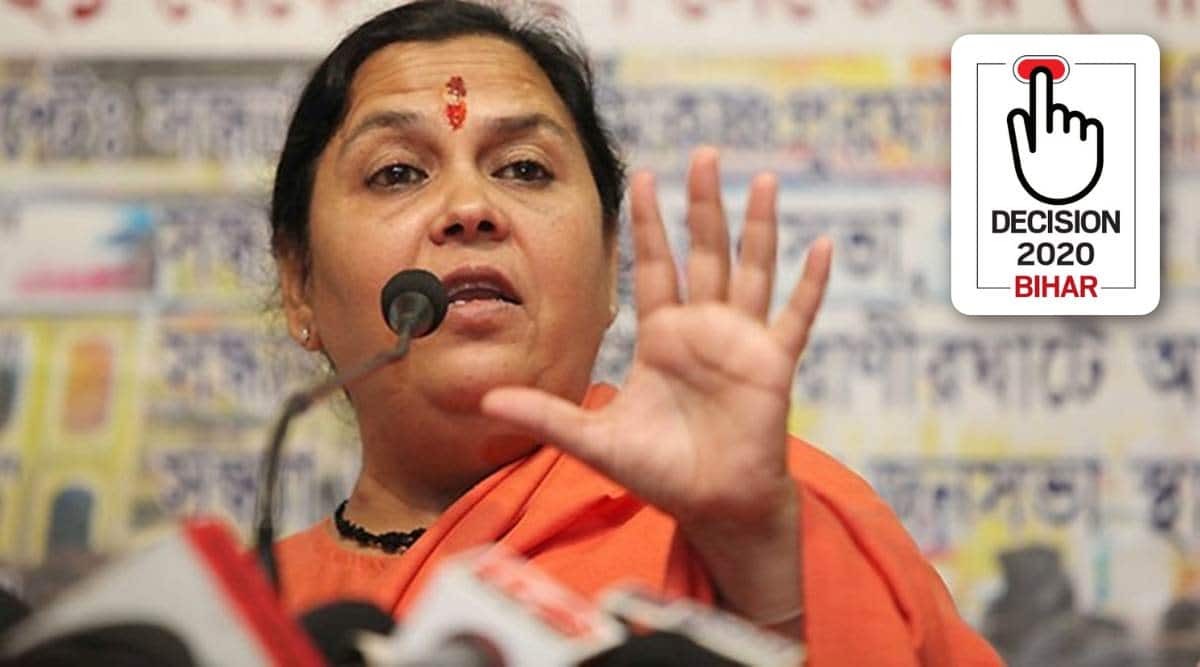 Visuals from BJP headquarters in Delhi

Visuals from BJP headquarters in Delhi Women have become the largest group of silent voters for us: PM Modi

Every life saved from Covid is a success story for India: PM Modi

Talking about the Covid-19 pandemic, Prime Minister Narendra Modi said: "The way we've fought this pandemic from Janta Curfew till today, has been reflected in these results. Every life saved from Covid is a success story for India."

Behind BJP's success is its governance model: PM Modi

Odisha: Voting underway in bypoll to Brajrajnagar Assembly segment
All in yellow, Bhagat Singh village awaits ascension of Bhagwant Mann as CM
Sawant to meet PM, Shah, Nadda today over govt formation in Goa
BJP to decide on Uttarakhand CM after Holi
After Punjab, AAP all set to venture into Haryana
More from Elections >>
Peaceful conduct of voting were the distinctive features of Bihar polls: PM Modi

"No re-polling and peaceful conduct of voting were the distinctive features of Bihar elections 2020. Earlier there used to be news of booth capturing etc.," Prime Minister Narendra Modi says at BJP headquarters.

The only point of debate during elections is 'development': PM Modi

"The people of India clearly stated that the only point of debate during elections will be development in the 21st century India," Prime Minister Narendra Modi said in his address.

"People of India are asking every other party to come to this plank, and showing them that these are the real issues," he added.

"I congratulate every worker of NDA," says PM Modi

"I congratulate every worker of NDA as well as their families for the success of their dedicated work and contribution in the elections. I want to congratulate BJP President JP Nadda ji for the victory in the polls," PM Modi said.

It was not easy to conduct polls during Covid crisis: PM Modi

In his address, Prime Minister Modi said that it was not easy to conduct polls during the ongoing Covid-19 crisis. He also said that there is no comparison to the faith Indians have in their democracy.

I thank people of country for enthusiastically participating in elections: PM Modi

"I want to thank the people of the country, not because they made BJP win the polls across the states, but also because all of us enthusiastically participated in the festival of democracy," Prime Minister Narendra Modi said in his address to BJP workers.

Meanwhile, in his first reaction since Bihar election results were announced, JD(U) leader Nitish Kumar in a tweet said: "I salute the public for the majority it gave to the NDA. I thank PM Narendra Modi for his support"

This was India's first big election after world was hit with Covid: JP Nadda

Addressing party working, BJP national president JP said: "This was India's first big elections after the world was hit by the COVID pandemic. From viewpoint of contributing to the elections to bringing people out to vote for us, it has been a big and defining period." 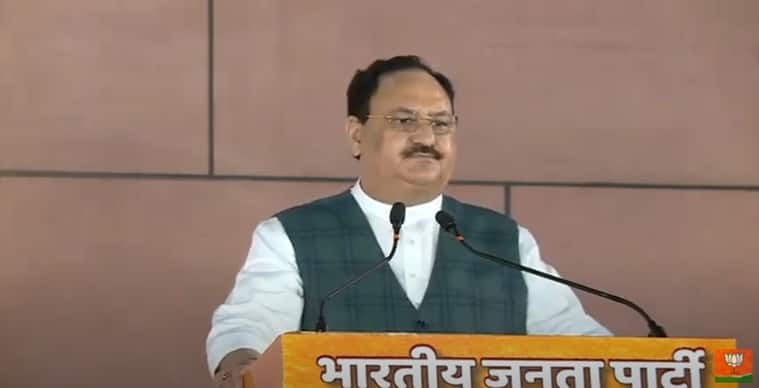 Prime Minister Narendra Modi arrives at party headquarters to take part in the BJP's celebrations following the victory in the Bihar elections and impressive show in the bypolls. In a state that has always been watched for what its social and political undercurrent signify, the 2020 Bihar poll results will be keenly watched. It is India’s first mass polls in the shadow of the pandemic, and Bihar’s first in a long, long time without either Lalu Prasad or the just deceased Ram Vilas Paswan present. Nitish Kumar, meanwhile, has conceded much ground in his alliance with Narendra Modi’s BJP.

The fate of the Nitish-led JD(U) government, which has helmed Bihar for a decade and a half, will be decided on Tuesday as election results to the 243-member legislative assembly will be declared. The counting of votes began at 8 am at 55 centres across 38 districts.

The results will decide if the voters have decided to hand over the state’s baton to the Grand alliance (Mahagathbandhan) led by its CM candidate Tejashwi Yadav, which constitutes the RJD, the Congress and Left parties.

Most exit polls have given the RJD-Congress-Left alliance a clear edge over the JD(U)-BJP coalition and has predicted that the ruling government was on its way out. While one poll forecast that the RJD-led Opposition alliance could get a two-thirds majority, another said it would cross the halfway mark comfortably. According to pollsters, Chirag Paswan’s Lok Janshakti Party, would end up with single-digit seats.

In the Grand Alliance, RJD contested on 144 seats and Congress on 70. The three Left parties fought from 29 constituencies: CPI(ML) from 19 seats, and the CPI and CPI(M) six and four seats, respectively. In the NDA camp, JD(U) and BJP were allotted 122 and 121 seats respectively. Out of that, JD(U) provided seven seats to HAM while BJP allocated 11 seats to Vikassheel Insaan Party (VIP) from its quota.

Of the eight exit polls, two gave the RJD-led alliance a comfortable majority. While the India Today Axis My India poll predicted that the Tejashwi Prasad-led Opposition alliance would get between 139 and 161 seats, well above the halfway mark of 122, the CNN-NEWS 18-Today’s Chanakya poll gave the RJD-led alliance a landslide majority of 180 seats (plus or minus 11). The Chanakya poll gave the JD(U)-BJP alliance just 55 seats. The India Today poll predicted that the ruling alliance would get between 69 and 91 seats.

The election has seen Nitish fighting for a fourth term, facing seeming anti-incumbency and economic distress, in an alliance with the BJP that seemed to develop deep faultlines, particularly with the LJP’s decision to contest separately, away from the NDA.

Much of the conversation around the RJD-led Grand Alliance, with the Congress and the Left as partners, has been on its ability to tap into this anti-incumbency, with Tejashwi cross-crossing the state at a breathless rate, to shore up votes beyond the traditional Muslim-Yadav bastions.

Quixplained: From jobs to a free Covid-19 vaccine, what parties have promised Bihar

Explained: Is Congress in the race in Bihar?

Explained: Win or lose, Bihar elections will mark the emergence of Tejashwi Yadav

What to watch out for: LJP effect on NDA seats, RJD claim of a new MY base, ‘Mazdoor Yuva’

All work, or only play? The sum total of the job math playing out in Bihar election speeches