Elections 2022 Highlights: PM Modi hits out at AAP in Punjab, calls it ‘photocopy’ of Congress

Elections 2022 Highlights: Modi stated that Congress had questioned the soldier's capabilities during the Pulwama attack, so voters must decide if they "trust the security of a border state like Punjab in such people’s hands 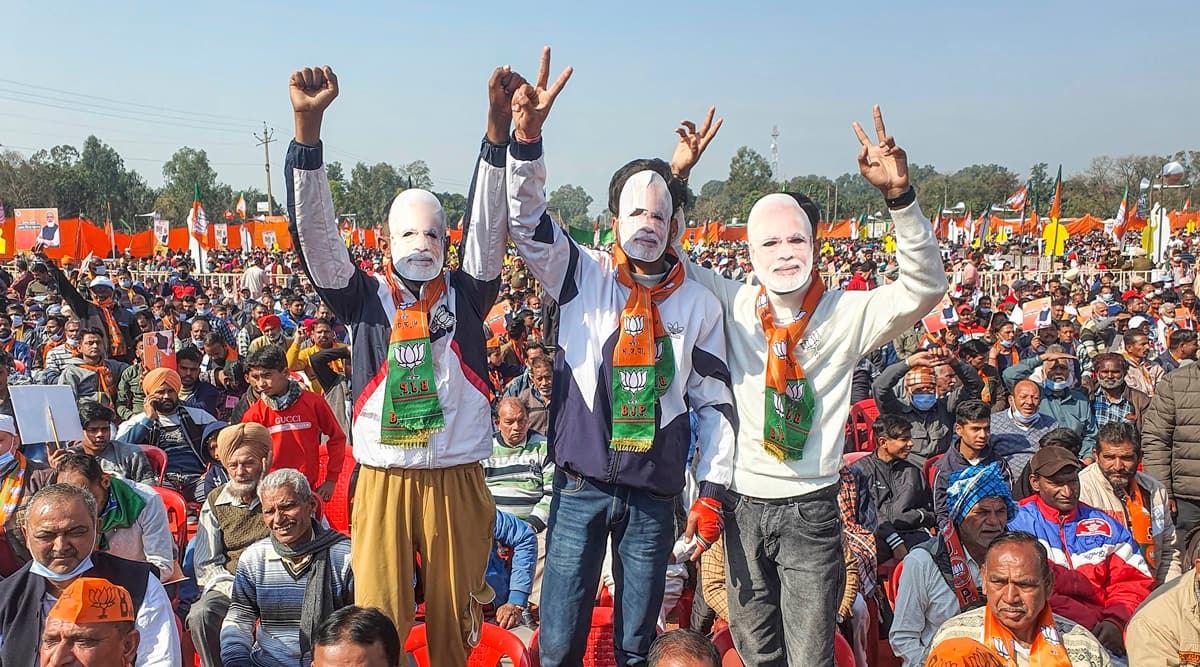 Elections 2022 Highlights: While addressing a rally in Punjab’s Pathankot ahead of the February 20 Assembly polls, Prime Minister Narendra Modi hit out at the Congress and Aam Aadmi Party, alleging that they are “partners in crime”. “One party has pushed Punjab’s youth into drugs, the other has pushed Delhi into liquor…Despite being two sides of the same coin, both these parties are doing WWF in Punjab. In Delhi, AAP only could form the government with the Congress’s support. If Congress is original, this other party is its photocopy,” Modi said. He added that both the parties had opposed the construction of Ram Temple in Ayodhya and have questioned the capabilities of our soldiers.

He stated that Congress had raised doubts over the army’s capabilities during the Pulwama attack, so voters must decide if they “trust the security of a border state like Punjab in such people’s hands.” He added, “Wherever BJP develops a firm foot in a state, people running the governments through remote-control from Delhi get washed out from that state.” The PM urged voters in Punjab to allow him and the BJP party to serve the state, saying that BJP has ensured peace and development in the state at the cost of the party.

With just days to go before the Punjab polls, Congress leaders Priyanka and Rahul Gandhi offered their prayers at the birthplace of Sant Ravidas in Seer Goverdhanpur in Uttar Pradesh’s Varanasi on his birth anniversary on Wednesday. The party has said Priyanka would continue with her campaign after participating in the Ravidass Jayanti celebrations.

Addressing an election campaign in Kanpur, which goes to polls on February 20, the Congress general secretary and its Uttar Pradesh in-charge slammed the BJP-led Centre and the state government for releasing Ashish Mishra, the minister's son, on bail.

Mishra, the accused in the October 3, 2021 violence in Lakhimpur Kheri, wherein eight people -- four farmers, two BJP workers and a journalist -- were killed, walked out of jail on Tuesday. There has been a demand among opposition parties and farmers groups for sacking of Ajay Mishra Teni, the Union Minister of State for Home Affairs, ever since the infamous incident in his native district of Lakhimpur Kheri. (PTI)

Had Modi been PM in 1947, Kartarpur Sahib, Nankana Sahib would've been in India: Amit Shah

Union Home Minister Amit Shah on Wednesday said had Narendra Modi been prime minister at the time India gained Independence, Kartarpur Sahib and Nankana Sahib would have been part of this country.

While Kartarpur Sahib is the final resting place of Guru Nanak Dev, Nankana Sahib is the birthplace of the Sikhism founder. Both these places are now in Pakistan.

At a poll rally in Ferozepur, Shah said it was Modi who fulfilled the Sikhs' long-pending demand of opening the Kartarpur Sahib corridor. "Had Narendra Modi been the prime minister when India gained Independence, Kartarpur Sahib and Nankana Sahib would have been part of India and not gone to Pakistan," he said. (PTI)

Addressing an election meeting in support of party candidate Vijay Sampla at Hadiabad sub-town in the evening, the Women and Child Development minister said Channi's statement was against the spirit of “Bhartiyata” and was aimed at disintegrating the society.

During a poll rally in Rupnagar, Channi courted controversy by asking people not to let the “bhaiyas” of Uttar Pradesh, Bihar and Delhi enter the state, a remark apparently aimed at AAP leaders. In a video circulating on social media, Congress general secretary Priyanka Gandhi Vadra was seen besides Channi clapping when he made the remark. (PTI)

The heart of Uttar Pradesh, and one of its major industrial hubs, Kanpur had voted overwhelmingly for the BJP in the 2017 Assembly and 2019 Lok Sabha elections, even putting behind it the setbacks of demonetisation. In an acknowledgment of Kanpur’s importance, the BJP had made two of its seven MLAs, who had won from Kanpur’s 10 seats, Cabinet ministers. Hoping to repeat its performance in the February 20 polls, the BJP is talking of development, and wishing that the anger over unemployment would not swamp it.

The Cabinet Minister for Infrastructure and Industrial Development, Satish Mahana, an MLA from Kanpur since 1991, who is trying to win his eighth Assembly election, is the star campaigner across the district. In nukkad meetings, he talks about the recently inaugurated first stretch of the Metro Rail (for which the Samajwadi Party too takes credit) and the “24-hour electricity supply”.

“2017 se pehle jab humari sarkar nahin thi, to batti aati nahin thi. Humari sarkar bani to batti jati nahin. Sabko uska labh milta hai (Before 2017, when it was not our government, people would never get power. Now, there are no power cuts. Everyone gains from it),” he says campaigning in the Kanpur Cantonment seat. Read More

Former AICC general secretary incharge of Punjab Congress affairs, Harish Rawat, who is also a party aspirant for the CM’s post in Uttarakhand, tells Kanchan Vasdev that Charanjit Singh Channi had proved to be a good CM for the state and this will help Congress net a repeat victory in the Assembly polls. Read Full Interview Here

Not against people of Pakistan, but their rulers, army: Amarinder Singh in Punjab's Malerkotla

Former Punjab CM Capt Amarinder Singh on Wednesday, while campaigning in Muslim-dominated Malerkotla for his party candidates Farzana Alam and Sardar Ali, said he was "not against the people of Pakistan but against their rulers and the army who were fomenting trouble in India."

Addressing a rally in Lucknow, BSP supremo Mayawati Wednesday sad the Samajwadi Party and the BJP must be stopped from coming to power in Uttar Pradesh.

Stating that the BJP government has been busy in implementing its "casteist and capitalist policies" and the "narrow-minded agenda of the RSS", Maywati added, "There has an environment of hatred and tension in the name of religion."

Attacking the SP, Mayawati said "goons, criminals, mafias, rioters and anti-social elements were running amok" during the Samajwadi Party's rule in UP. "Even development works were only limited to a particular area and community," she claimed. (ANI)

Addressing a gathering, Kejriwal said his party will speak with the Central Government regarding building of a grand temple of Guru Ravidas in Delhi.

Union Minister Anurag Thakur and other BJP leaders on Wednesday submitted a complaint to the Election Commission in view of the alleged attack against Union Minister SP Singh Baghel. Stones were allegedly thrown at Baghel's convoy in Uttar Pradesh's Mainpuri on Tuesday. A complaint was lodged by the BJP.

Congress leaders Priyanka and Rahul Gandhi offered their prayers at the birthplace of Sant Ravidas in Seer Goverdhanpur in Uttar Pradesh’s Varanasi on his birth anniversary on Wednesday.

Addressing voters in Pathankot, PM Modi said, "We have made highways in Punjab. The Delhi-Katra expressway crosses through Punjab and it will provide new avenues for development and employment opportunities for the people of Punjab."

"We are creating the Ludhiana-Bengal corridor. We are also working on getting more airports in Punjab. The PGI satellite centres is also being set up," Modi said.

"We have also created food parks in Punjab. Record crop procurement on MSP is happening for farmers of Punjab," the PM said, stating that the BJP has a vision for 'Nava Punjab'. "We shall create a border development authority for developing areas like Pathankot," he added.

Modi says Congress has found 'partner in crime', one pushes drugs in Punjab, other liquor in Delhi

Referring to the Aam Aadmi Party, PM Modi on Tuesday said, "Now Congress has also found a “partner in crime”. For Ram Mandir, both these parties protested and both question the sacrifices of our soldiers."

"One party has pushed Punjab’s youth into drugs, the other has pushed Delhi into liquor. Now both these parties are doing WWF in Punjab. In Delhi, AAP only could form the government with the Congress's support. If Congress is original, this other party is its photocopy," Modi said.

He added, "These days, Congress leaders are only speaking against Modi, against BJP, because they know that BJP will come to power this time."

Congress leaders Priyanka and Rahul Gandhi offered their prayers at the birthplace of Sant Ravidas in Seer Goverdhanpur in Uttar Pradesh’s Varanasi on his birth anniversary on Wednesday.

For BJP, Punjabiyat is supreme, says PM Modi at Pathankot

Referencing the Budget, PM Modi said, "We shall implement a vibrant village scheme, which will include creating infrastructure, development of tourism and providing jobs. A new strength shall be given to our border area villages."

"If they (Congress) get another chance, they will not hesitate to again put this state’s security and peace in danger. Earlier people like Capt Amarinder Singh used to be there and used to stop them from doing that, but now he is also not there," PM Modi said in Pathankot.

Congress questioned soldiers' capability during Pulwama attack, can we hand Punjab's security to them?: PM Modi

"When Pakistani terrorists attacked this land of Pathankot, the entire country was united but where were Congress party leaders at that time? They questioned the capabilities of our armed forces, they raised doubts, they raised questions on the sacrifices of our martyrs. Even during the anniversary of Pulwama attack, they are again questioning the proofs of our soldiers’ capabilities. Now it’s you who has to decide if can we trust the security of a border state like Punjab in such people’s hands," Modi said in Pathankot.

Modi says once BJP has a firm foot in state, remote-controlled govts are washed out

Prime Minister Narendra Modi said, “wherever BJP develops a firm foot in a state, people running the governments through remote-control from Delhi get washed out from that state.”

"This means wherever peace and development arrive, corruption vanishes from such places. We have to do the same in Punjab this time," he said at a rally in Pathankot.

"I grew up eating your food, but the way I and BJP were provided to serve in other parts of the country, I haven’t got that opportunity to serve in Punjab yet. Earlier too, as a small partner we used to walk on the edge, we prioritised Punjab’s peace and development at the cost of our own party. Today, I have come to you seeking that opportunity to serve you for the next five years," Modi said at a rally in Punjab. Considering that the freebies attract voters, the political parties are leaving no stone unturned. Leading with these announcements are Kejriwal and Channi. Kejriwal had earlier announced that all women, above 18 years of age, would be given Rs 1,000 every month if the state elected an AAP government.

His announcement sparked off a debate as there are about 1.10 crore women voters in Punjab, a state which is already burdened with a subsidy of over Rs 10,000 crore on power. The proposed sop would mean an expenditure of similar scale for Punjab, which is having a debt of over Rs 2.5 lakh crore.

By getting jailed gangster-turned-politician Mukhtar Ansari’s 29-year-old son Abbas Ansari to file nomination from the Mau constituency as a candidate of its ally Suheldev Bharatiya Samaj Party (SBSP) instead of his father, the Samajwadi Party (SP) seems to have made a bid to avoid being branded a “party of the mafia”. Currently lodged in Banda jail, Ansari is Mau’s sitting MLA.

In their election campaigns, top BJP leaders, including Prime Minister Narendra Modi, Home Minister Amit Shah and UP Chief Minister Yogi Adityanath have relentlessly targeted the SP for “giving tickets to criminals” – an allegation denied by SP president Akhilesh Yadav, who, in turn, has levelled a similar counter-allegation at the BJP.

Must Read stories on Elections 2022

Below the surface in Varanasi, layers of a simmering faultline