Assembly Elections 2018 Results: T S Singhdeo is one of the contenders for the CM’s post. (Express photo)

After Madhya Pradesh and Rajasthan got new chief ministers, all eyes are now set on Chhattisgarh where the announcement will take place on Saturday. According to a release by the state unit, the four CM contenders — T S Singh Deo, Bhupesh Baghel, Tamradhwaj Sahu and Charan Das Mahant — along with the party’s central observer Mallikarjun Kharge will arrive in Raipur tomorrow to hold a meeting with the other MLAs following which the official announcement will be made. The four aspirants had met Congress chief Rahul Gandhi in the national capital earlier in the day.

Meanwhile, after several hours of deliberations and meetings, Ashok Gehlot was named as Rajasthan Chief Minister and state unit chief Sachin Pilot as deputy chief minister. Gehlot had served as CM on two occasions, from 1998 to 2003 and again from 2008 to 2013. The announcement was made by the state’s party observer K C Venugopal. He will take oath as CM on December 17 along with Kamal Nath, who was named as MP CM yesterday.

With the announcement made in Rajasthan, the Congress party will now take a call on who will be the CM in  Chhattisgarh. Follow Highlights

I will stay in state politics: Raman Singh

Outgoing Chhattisgarh CM Raman Singh said he will not move to the Centre but remain in state politics. “Mai yahi tha aur yahi rahunga (I was here and will stay here),” Singh said at a press conference in Raipur. “Now I will keep on coming to the BJP office in my new role. I will be meeting the press more often. Earlier as a CM, there were certain limitations for me but now I will come to party office and keep on meeting my workers,” he added. Read full story here.

Raipur: Congress office decked up ahead of announcement Congress office in Raipur decorated ahead of the announcement on Chhattisgarh CM tomorrow. (Express photo/Praveen Khanna)

Chhattisgarh Congress leaders to meet at 10 am tomorrow

Congress President Rahul Gandhi will attend the swearing-in ceremony of Ashok Gehlot and Sachin Pilot as Rajasthan CM & Dy CM respectively in Jaipur at 10 am. He will also attend the oath ceremony of Kamal Nath as Madhya Pradesh CM at 1:30 pm on the same day https://t.co/qYUQAefrSE

After landing in Jaipur, newly-elected Rajasthan CM Ashok Gehlot told reporters, “We would like to thank the public and our workers. The oath-taking ceremony will take place on December 17 following which the new Cabinet will be inducted.”

Rajasthan CM designate Ashok Gehlot: We would like to thank the public and our workers. Oath ceremony of Chief Minister & Deputy Chief Minister will take place on December 17 & then the cabinet will be inducted pic.twitter.com/hnnxP2U7WY

In a statement released late on Friday, Chhattisgarh Congress said the four CM contenders -- T S Singh Deo, Bhupesh Baghel, Tamradhwaj Sahu and Charan Das Mahant -- along with state party observer Mallikarjun Kharge will arrive in Raipur on Saturday. A meeting of the MLAs will be held following which an official announcment will be made.

Chhattisgarh Congress puts out a press statement. Says Kharge,Punia, Baghel, Singhdeo, Mahant and Sahu to arrive in Raipur on 15th. A meeting of MLAs will be called and an official announcement made there @IndianExpress Preparation underway for the oath-taking ceremony in Chhattisgarh. The Congress high command is yet to take a call on who will be the CM. (Express photo/Praveen Khanna) 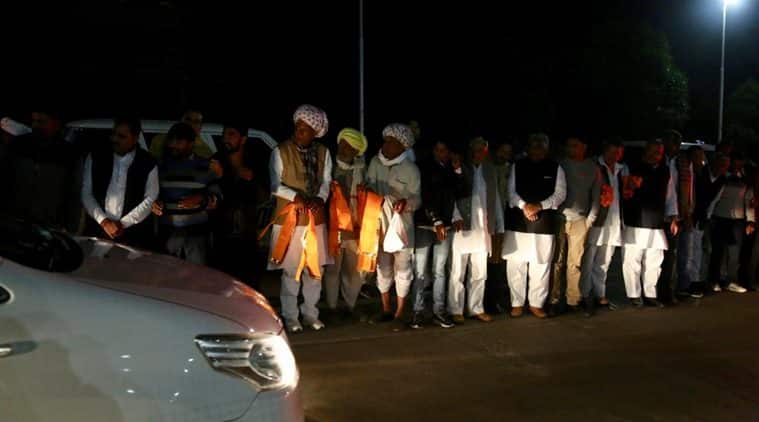 Farmers' loans to be waived off as promised by Congress: Rahul Gandhi

"The loans of the farmers in Rajasthan, Madhya Pradesh and Chhattisgarh will be waived off soon as promised by Congress," Rahul Gandhi was quoted as saying by PTI. 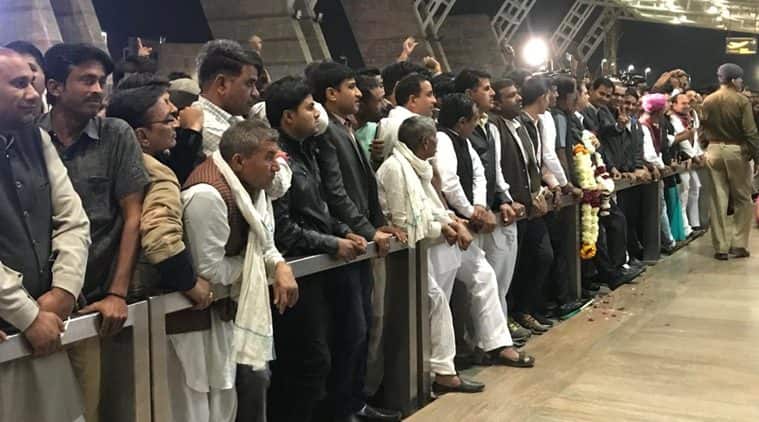 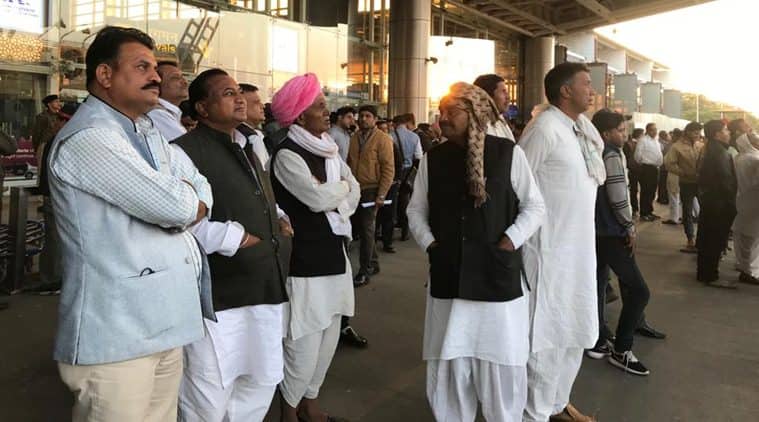 With the Congress leadership yet to take a call on who will be the chief minister in Chhattisgarh, party chief Rahul Gandhi met the four contenders today -- T S Singhdeo, Bhupesh Baghel, Charan Das Mahant and Tamradhwaj Sahu. On Thursday, Rahul had deferred the decision as he wanted to hold discussions with prominent party leaders of the state. He had also held a meeting with the party's central observer for Chhattisgarh Mallikarjun Kharge. Will work for good governance: Gehlot

"I and my friend Sachin Pilot, and all the party leaders who will join our Cabinet, will work for good governance as per the wishes of our party chief Rahul Gandhi. I would like to thank the people of the state and the voters for supporting us," Gehlot tweeted.

Thank Rahul for giving me another chance to serve as CM: Gehlot

“I am thankful to our party chief Rahul Gandhi and other party leaders for providing me with another opportunity to serve the people of Rajasthan,” Gehlot tweeted.

In Bhopal, soon after he was named CM-designate, Kamal Nath thanked Scindia and said he was happy because he had worked with his father, the late Madhavrao Scindia. “For me, this post is a milestone… We shall work together to fulfil promises made in our manifesto. I had no demands. I have worked all my life without hankering for any post. I have worked with Sanjay Gandhi, Indiraji, Rajivji and now Rahul Gandhi,” he said. Earlier, before Nath and Scindia flew to Bhopal, Gandhi put out a photograph with the two leaders and a caption quoting Leo Tolstoy: “The two most powerful warriors are patience and time.”

But it was Rajasthan that was giving the Congress a headache. Gandhi was joined by his mother Sonia Gandhi and sister Priyanka Vadra as Gehlot and Pilot met him individually in the morning.

The Congress emerged as the single largest party in Rajasthan with 99 seats and its ally Rashtriya Lok Dal (RLD) won a seat, pushing it past the halfway mark. In Madhya Pradesh, where the party won 114 seats, Mayawati and Samajwadi Party chief Akhilesh Yadav offered their support to help the party reach the magic number, 116, to form the government.