Vidhan Sabha election results 2019 LIVE Highlights: State Assembly Elections were simultaneously held in four states- Odisha, Andhra Pradesh, Arunachal Pradesh and Sikkim. Bypolls held in Tamil Nadu will determine if the DMK has an upper hand over the AIADMK after 18 of its MLAs left the party.

Vidhan Sabha election results 2019 Highlights: Leading in 112/146 seats in Odisha, Naveen Patnaik-led BJD is set to form fifth staright term in Odisha. The state seem to negate the Modi wave that is sweeping the country. The redoubtable Naveen Patnaik, who is powering his party to a certain triumph, is leading from both Bijepur and his home turf Hinjili.

In Andhra Pradesh, Jagan Mohan Reddy’s YSR Congress gets closer to a clean sweep in all 25 Lok Sabha seats of the state. It has also taken a massive lead of 147/175 assembly seats. TDP Chief and state Chief Minister Chandrababu Naidu is likely to tender a resignation by Thursday evening, reported ANI.

Meanwhile in Arunachal Pradesh, it’s BJP vs Congress with the saffron party marching ahead of the Congress. Sikkim Chief Minister Pawan Kumar Chmaling is hoping to retain his record of being the longest serving chief minister of any State as trends show a lead for his party Sikkim Democratic Front (SDF).

Bypolls: Congress’s Babush Monserrate won the Panaji bypoll in Goa, which fell vacant after the death of former chief minister Manohar Parikkar. Results for Mandrem, Mapusa and Shiroda in Goa is awaited.  In Tamil Nadu, DMK is leading in 12 of 22 seats that went on bypolls on April 18 and May 19.  The results  for 22 Assembly seats in Tamil Nadu  will seal the fate of the ruling AIADMK government led by E Palaniswami.  Meanwhile, Madhya Pradesh chief minister and nine-time MP Kamal Nath contested the Chhindwara bypolls for the first time. Other states that have bypolls include Karnataka, West Bengal, Gujarat and Puducherry.

DMK's Thiruvarur bypoll candidate Poondi Kalaivanan has won the elections by a vote difference of 62,288. This constituency became vacant following the death of DMK patriarch Kalaignar Karunanidhi in 2018.

Neck and neck between regional parties SKM and SDF

Sitting MLA from Lumla constituency in Tawang district Jambhi Tashi of BJP was re-elected by defeating his lone rival
Jampa Thirnly Kunkhap of the Congress by a margin of 1,288 votes.

Jawahar Chavda of BJP builds a lead of 9000 leads after Round 31 of counting of votes for bypoll to Manavadar Assembly constituency in Junagadh district. #ElectionResults2019 @IndianExpress @decision2019 pic.twitter.com/jR9GhYQdFM

Neck and neck contest in Sikkim 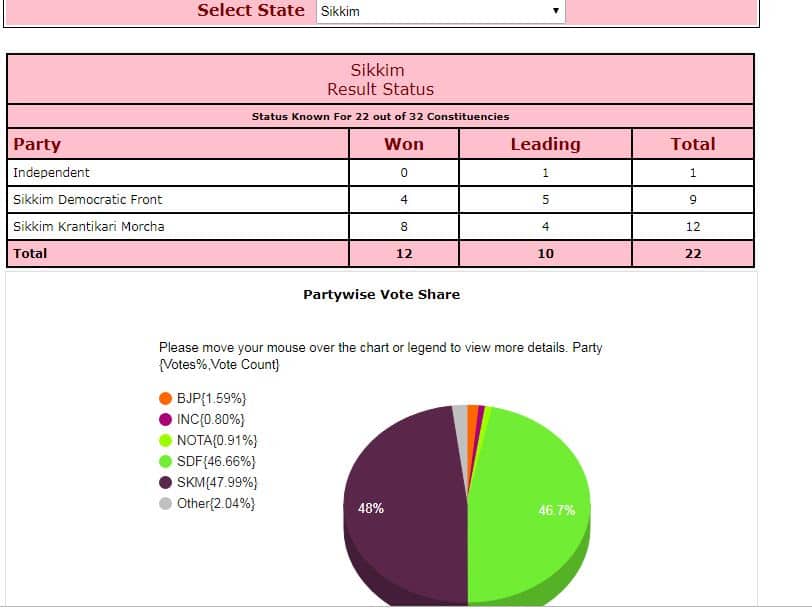 Odisha's ruling BJD Thursday looked set to form its government for a fifth straight term, negating a Modi wave that is sweeping the country with its candidates leading in 112 of the state's 146 seats.

The redoubtable Naveen Patnaik, who is powering his party to a certain triumph, is leading from both Bijepur and his home turf Hinjili. Election to one seat was countermanded following the death of a candidate. The BJP appears set to emerge as the main opposition party, with its nominees leading in 21 seats.

In TamiL Nadu, the Dravida Munnetra Kazhagam (DMK) led alliance is close to win all 39 Lok Sabha seats. The party has also managed to lead in 12 of 22 assembly seats.

Without Manohar Parrikar, BJP cannot win in the most important seat: Atanasio Monserrate Goa's most prestigious assembly seat of capital Panjim, retained by former Defence Minister Manohar Parrikar since 1994 went to Congress after 25 years. Congress Candidate Atanasio Monserrate won by a narrow margin of 1758 votes. Monserrate polled 8748 votes against BJP candidate Sidharth Kuncalienkar ’s 6990 votes. AAP's Valmiki Naik and Subhash Velingkar of the Goa Suraksha Manch polled 236 and 516 votes respectively.  The BJP —which hoped Kuncalienkar would win, was decimated in all three rounds, with Monserrate leading from round one itself.  “It just shows that without (Manohar)Parrikar they cannot win in the most important seat,” Monserrate told reporters soon after the figures were announced. Such was the confidence that by 10:45 am firecrackers outside the counting station announced his victory even as the official figures for the final rounds were being counted. The  loss of Panjim seat pinched the BJP which won all the three assembly seats of Mandrem , Shiroda and Mapusa — all of which went to polls along with parliamentary seats. With this the BJP now has 17 MLAs against Congress 15.

Panaji' AAP candidate Valmiki Naik on Thursday condratulated the Congress candidate Atanasio Monserrate for his victory in the Panaji bypoll.

"Despite the electoral setback today, our morale remains higher than ever. We fought hard, we fought honestly, and we fought against all odds. We will only work harder now to give the voters confidence in AAP in the next election.

It’s a relief that BJP has finally lost in Panjim after bringing the city to its worst condition ever. I hope the new MLA works on all the major issues of our city. At the same time we cannot forget that it is now ruled by a person who, as a minister, had tried to sell the entire state off to real estate sharks and against whom the whole of Goa rose in 2006-07. Let there be no doubt that we are watching closely, and we will continue to speak truth to power. We will continue to raise the issues of our city and hold the new MLA to account without fear or favour.

I wish all the other victorious candidates all the best as well, and hope that we see an improvement in the life of the common man, " he said.

Y S Jagan Mohan Reddy of YSR Congress Party is all set to take over as Chief Minister of Andhra Pradesh. YSRCP was leading in 152 of the 175 Assembly and 24 of 25 Lok Sabha seats in Andhra Pradesh. It is a humiliating defeat for TDP chief N Chandrababu Naidu as his party was reduced to 20-23 Assembly seats and may draw a blank in Lok Sabha seats. A strong anti-incumbency wave which even the YSRCP did not anticipate catapulted Jagan to power. Naidu’s anti-Modi stance also appears to have backfired on him as the general pro-Modi wave translated into votes for Jagan who had strategically positioned himself—neither for nor against BJP. The Congress in AP failed to win even a single Assembly or LS seat for the second successive general elections. The BJP, which won 3 LS and four Assembly seats in 2014, failed to open account this time.

Kamal Haasan's MNM has received less votes than NOTA polled in the Tamil Nadu bypolls in constituencies like Pappireddipatti, Thiruvarur and Vilathikulam. The party does not seem to be faring well in the Lok Sabha elections either.

With his YSR Congress heading for a landslide victory in the Assembly and Lok Sabha elections in Andhra Pradesh, party president Y S Jaganmohan Reddy Thursday termed it as people's victory. He also said the YSRC's victory was expected. "I sincerely thank the people who overwhelmingly voted for YSRC and blessed it. I also thank them for exercising their franchise in large numbers and enhanced the value of democracy," Jaganmohan Reddy said in a Facebook post.

"I will live up to the expectations of the people," he promised.

Looking at the loot by N Chandrababu Naidu, the public doesn't want him to rule the state: Voters

Ummareddy Venkateswarlu, YSRCP, Andhra Pradesh: Out of 175 assembly seats, YSRCP is leading on 150 seats. Pp have confidence on Jaganmohan Reddy to lead the state. Looking at the loot by N Chandrababu Naidu, the public doesn't want him to rule the state. pic.twitter.com/Y9STeviDgG

In Andhra’s first election since split, lot at stake for Naidu, YS Jagan

While anti-incumbency has pushed TDP to the wall, the slew of welfare schemes and sops announced in the last two months have given it a fighting chance. On the other hand, Jaganmohan Reddy, who has been laying the groundwork for more than 3 years, is poised to give a tough fight.

Traditionally, the party that wins the most seats in East and West Godavari districts forms the government in Andhra. East Godavari has 19 Assembly seats (out of 175) and 3 Lok Sabha constituencies (out of 25), while there are 15 and 3 in West Godavari.

Here's what the trends show so far. YSR Congress is leading in 121 seats in Andhra Pradesh, BJD leads in 83 seats in Odisha, SDF and SKM are in close fight in Sikkim and BJP takes lead in Arunachal Pradesh with 40 seats. Contesting alone since 2004, Chandrababu Naidu's Telugu Desam Party (TDP) is hoping to return to power in Andhra Pradesh, where he was faced with growing anti-incumbency and the resurgence of YSRCP's Jagan Mohan Reddy.

In Odisha, Naveen Patnaik-led Biju Janata Dal (BJD) is expecting a fifth term in office. Despite his popularity, this election was Patnaik’s toughest with many of his colleagues, including his once close-aide Jay Panda, quitting the party and joining the BJP.

Elections in Arunachal Pradesh, meanwhile, were marred with protests and violence over the Permanent Residence Certificate which may mark a dent on the BJP government in the state led by Pema Khandu. Elections were contested between the BJP, Congress, NPP, PPA and Janata Dal (Secular). The state has 60 assembly constituencies of which 48 seats are being held the BJP.

Read | Will India’s longest-serving chief ministers get another term?

The bypolls for Panaji and Mapusa in Goa and Agra North in Uttar Pradesh were necessitated due to the deaths of sitting BJP MLAs Manohar Parrikar, Francis D'Souza and Jagan Prasad Garg, respectively. Mandrem, Shiroda in Goa also have bypolls as MLAs resigned to switch parties. The bypoll results in Goa could determine the stability of the BJP-led alliance in Goa.

The bypoll in West Bengal's Bhatpara was necessitated after Arjun Singh, who switched to BJP from TMC, resigned as Bhatpara’s MLA to contest the Lok Sabha polls. His son Pawan Kumar Singh is fighting the bypoll on a BJP ticket.

A bypoll is held for any vacant seat in Lok Sabha, Rajya Sabha, Legislative Assemblies and State Legislative Councils. Death or resignation of the sitting member are the most common reasons for vacancy. A bypoll is also necessitated if a candidate is elected from more than one seat as well.

Christina GeorgeChristina is a  Senior Sub Editor with The Indian Express. She can be... read more