Rajasthan, MP, Mizoram, Telangana, Chhattisgarh Assembly Election Results 2018 highlights: The results in Hindi heartland states of MP, Chhattisgarh and Rajasthan have come as a shot in the arm for the Congress in the run-up to the 2019 Lok Sabha elections.

Rajasthan, MP, Mizoram, Telangana, Chhattisgarh Assembly Election Results 2018: The results will have a bearing on efforts to forge opposition unity for the 2019 elections.

Rajasthan, MP, Mizoram, Telangana, Chhattisgarh Election 2018 highlights: Ending its prolonged electoral reversals, a reinvigorated Congress produced a resilient comeback as it is on course to oust the BJP to form its governments in Rajasthan and Chhattisgarh. Madhya Pradesh is witnessing a tantalisingly close fight between the ruling BJP and the opposition Congress. The TRS, on the other hand, secured a thumping majority in Telangana while MNF has defeated Congress in the latter’s last bastions in Northeast.

Madhya Pradesh: Counting ends in 215 seats, final results likely to come at 3 am

JUST IN: Counting over in 215 ACs of MP, going on in 15 seats, say EC sources @IndianExpress #MadhyaPradeshElection2018

JUST IN: The wait for final results in MP could go up to 3am, say EC sources @IndianExpress

Appointment will be given only after EC clears: MP Governor House

Governor House: An appointment will be given only after the situation is made clear by the Election Commission. #MadhyaPradeshElections2018 https://t.co/HSpUhYOcov 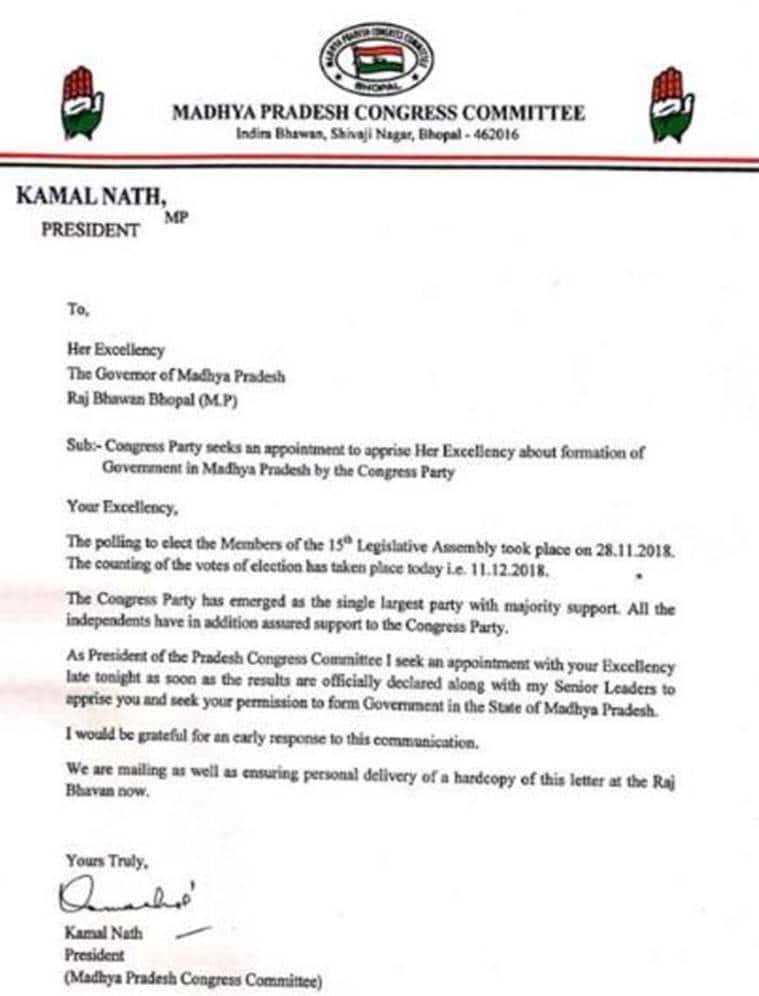 Congratulating the Congress for their performance in the recently-held elections in MP, Chhattisgarh and Rajasthan, Prime Minister Narendra Modi said his party accepts the mandate of the people with humility. He also congratulated KCR for his party's thumping victory in Telangana as well as MNF's stellar performance in Mizoram

He also thanked BJP cadres for their work during these elections and said: "Today’s results will further our resolve to serve people and work even harder for the development of India."

Congratulations to the Congress for their victories: PM Modi

We accept the people’s mandate with humility.

I thank the people of Chhattisgarh, Madhya Pradesh and Rajasthan for giving us the opportunity to serve these states. The BJP Governments in these states worked tirelessly for the welfare of the people.

Accept the mandate given by people of Rajasthan: Outgoing CM Vasundhara Raje

Congratulating Congress for emerging as the single largest party, outgoing Rajasthan CM Vasundhara Raje said she accepts the mandate given by the people and that her party will keep raising people's issues. "I would like to congratulate Congress. I accept this mandate by the people. BJP has worked a lot for them in these 5 years, I hope the next party takes those policies and works forward," Raje told reporters in Jaipur.

We have defeated BJP in Rajasthan, MP and Chhattisgarh: Rahul Gandhi

Buoyed over the Congress' performance in Hindi heartland states of Madhya Pradesh, Rajasthan and Chhattisgarh, Congress president Rahul Gandhi dedicated the victory to farmers and youths.

Dr Raman Singh, speaking to the media in Raipur, said the elections were fought under him and therefore the defeat is his responsibility. "I won't discuss the reasons for today's defeat but I congratulate the winners and thank all the party workers for their effort," Singh said. Asked if today's defeat  would have an impact on the 2019 polls, Singh said the elections were different and the party would put in all effort to ensure their victory in the upcoming general elections.

All smiles in Chhattisgarh Congress

Celebrations are underway in Chhattisgarh where the Congress has come back to power with 63 seats leaving the BJP with 18.

RLD vice president Jayant Chaudhary has announced that his party will support the Congress in Rajasthan. The party has won one seat. The Congress is leading in 104 and the BJP in 70. Voters have rejected what was unwanted, congratulations to them: Shiv Sena chief Uddhav Thackeray on assembly poll results. The Congress is leading in Madhya Pradesh, Rajasthan and Chhattisgarh.

'Modi Wave will never recede, we will bounce back in 2019'

Tamil Nadu BJP chief Tamilisai Soundarajan expressed confidence that the BJP will bounce back in 2019. "The result is just a setback; it’s not a defeat. People still want Narendra Modi to continue as PM and they don’t prefer Rahul Gandhi, and we have not suffered a huge defeat in any of the states. The union of opposition parties will not affect BJP. Modi wave will never ever recede. We never jump on victories nor lie down on defeats. I just have one thing to say to Congress; whenever we managed to win the elections, you say it’s due to faulty electoral machines, what about your victory now?"

In Kharsia,one of the most high profile constituencies in Chhattisgarh, Umesh Patel of the Congress has taken an unbeatable lead over former IAS officer OP Choudhary. This video below of a few mins ago is of Choudhary congratulating Patel @IndianExpress pic.twitter.com/6p5WSkl9dc

Congress is back in the lead in Madhya Pradesh

Congress is back in the lead in Madhya Pradesh. The party is presently leading in 115 seats, while the BJP is leading in 105. Meanwhile, the Shiv Sena said the outcome of the elections in the five states was a clear message to the BJP and there was a need for the ruling coalition to introspect.

Suspense over CM candidate in Chhattisgarh

Chhattisgarh Congress President Bhupesh Baghel has arrived at Congress office in Raipur. He says, “People of Chhattisgarh took the fight in their own hands. We are grateful to Rahul Gandhi, we fought for the people. We got more seats than expected, high command will decide who will be the chief minister."

People have recognised that BJP has done nothing in the last 5 years and they are moving towards other alternatives. People are with us in our fight against BJP. These 5 states results will help form a strong alternative to the BJP.  TDP respects the mandate of people of Telangana. Congratulations to Shri K. Chandrasekhar Rao. Also, best wishes to all the newly elected public representatives of 5 states.

Andhra Pradesh CM Chandrababu Naidu concedes defeat, says TDP respected the mandate of people of Telangana. "Congratulations to K Chandrasekhar Rao. Also, best wishes to all the newly elected public representatives of 5 states," he said. T Harish Rao, the nephew of KCR, said people had reposed faith in the TRS chief. "The people reposed faith in the leadership of our chief minister and they did not believe in the disinformation campaign of the opposition," said T Harish Rao.

Emerging kingmaker in Madhya Pradesh, BSP chief Mayawati has reportedly called all her winning MLAs to New Delhi for a meeting. The Congress will be hoping to stitch a post poll alliance with the BSP. While the party was supposed to have a pre-poll alliance, Mayawati pulled out following a disagreement over seat sharing. It will now be for the Congress to woo Mayawati and consequently form government.

Assembly Election Results 2018 highlights: Madhya Pradesh, Chhattisgarh and Rajasthan account for 65 Lok Sabha seats, of which the BJP had won 62 in 2014 when the wave swept the Hindi heartland.

The outcome of the Vidhan Sabha elections are significant as Madhya Pradesh, Chhattisgarh and Rajasthan account for 65 Lok Sabha seats of which the BJP had won 62 in 2014 when the Narendra Modi wave swept the Hindi heartland. Agrarian distress emerged as one of the significant issues raised by the Congress in its campaign. A good showing in these states would prompt the Congress to step up its attack on the government on farm distress, an issue which put the BJP on the backfoot a year ago in Gujarat as well.

Most of the exit polls predicted a comfortable win for Congress in the Rajasthan Vidhan Sabha assembly election results with the grand old party marching towards a majority mark. The BJP is battling strong anti-incumbency in Rajasthan, a state that has not voted the ruling party for a second term in the last 20 years.

For Chhattisgarh, most of the exit polls for the Chhattisgarh Vidhan Sabha election results have predicted a photo finish for the state, with a neck-and-neck contest between the BJP and the Congress. If exit polls are to believed, the BSP-JCC coalition may win between three and eight seats, which may help Jogi to emerge as a kingmaker in case of a hung assembly, which is a likely outcome.

All major exit polls for Telangana Vidhan Sabha election results have shown the TRS having a clear edge over the grand alliance that was quickly stitched after KCR announced his decision to go for early polls. The final voter turnout was 73.02 per cent despite many complaining that their names were missing from the voter rolls.