Election Highlights: If PM can waive off bank loans of ‘India’s richest’, then why not farmers’ loan, says Rahul Gandhi

Election Highlights: 72 constituencies of Chhattisgarh will go to polls in the second phase on November 20. In Madhya Pradesh on November 28, 2,907 candidates will be into the fray from 230 assembly seats.

While PM Modi launched a tirade on the Congress chief from Chhattisgarh, Gandhi targeted the BJP government from Madhya Pradesh.

The campaigning for the second phase of assembly elections in Chhattisgarh has reached its peak. 72 constituencies of the state will go to polls in this phase on November 20.

Battle lines have been drawn for the November 28 Madhya Pradesh elections in which 2,907 candidates will be into the fray from 230 assembly seats.

With assembly elections in Chhattisgarh and Madhya Pradesh this month, BJP and Congress are engaged in high voltage campaigns. Follow Highlights here

Not enough jobs created by BJP despite Make in India and Startup India schemes: Rahul Gandhi

Rahul Gandhi in Madhya Pradesh's Deori town attacked the Narendra Modi-led government over not generating enough employment opportunities despite Make in India and Startup India schemes, he also accused Shivraj Singh Chouhan of ruining healthcare and education systems in the state, and claimed that unemployment had doubled in Madhya Pradesh in the last 15 years. He said, 'The education system has been destroyed due to the Vyapam scam which has seen 50 deaths.'

Rahul Gandhi in Seoni said, "Land Acquisition Act has not been implemented in Madhya Pradesh. Big industrialists are acquiring lands illegally from farmers, aadivasis and are creating a land bank. No employment has been generated here."

He added, "CM Shivraj Singh Chouhan has made a thousand promises and yet fails to explain what happened with Vyapam Scam, in which 50 witnesses were killed. He has made MP a corruption centre."

PM Modi on demonetisation: Even an old man who loses his son recovers in a year, but not Congress

PM Modi said demonetisation did cause inconvenience in the beginning and that he has publicly apologised for it. He said that the common man was no longer crying over it and said his fight to take money away from looters will continue. Read more here

Global fuel prices are decreasing but in India fuel prices have doubled. All the burden is borne by the common people to benefit a handful of rich industrialists: Congress President @RahulGandhi #कांग्रेस_संग_खुशहाली

If Modi can waive off loans for the rich, why not for the farmers: Rahul Gandhi

Congress chief Rahul Gandhi addressing a gathering in Seoni targetted the Narendra Modi-led government, he said, "If PM Modi can waive off loans worth Rs 3,50,000 cr of India's richest then why can he not waive off loans of farmers? Congress will waive off farm loans within 10 days of forming the govt in MP."

He added, "On one hand, young people asking for loans are being made to suffer while just a handful of them are given the red-carpet treatment. Congress government will open the bank doors for the youth."

The PM said demonetisation did cause inconvenience in the beginning and that he has publicly apologised for it. He said that the common man was no longer crying over it and said his fight to take money away from looters will continue. Modi said demonetisation brought money stashed in beds, sacks and almirah to the banks. "The money belonged to you and it has been used to build toilets, houses, roads and to provide water to farmers," he added. The prime minister said his fight against corruption would continue.

Prime Minister Narendra Modi defended demonetisation, saying that only the Congress and one family were crying because what they had pilfered for four generations was lost in one go. "Even an old man who loses his son recovers in a year. Imagine how much they have lost that they are still finding it difficult to recover two years (of demonetisation) later," said PM Modi at a rally in Shahdol.

It's a promise that by 2022 everyone will have a home of their own: PM Modi in Shahdol

PM Modi is now addressing a gathering in Shahdol, Madhya Pradesh. Taking a swipe at the Congress, Modi says, 'On one side there is Congress who ruled in Madhya Pradesh for 54 years while BJP has been in power for 15 years, in every field, in every parameter we have achieved develpment which the Congress couldn't deliver in 54 years.'

Addressing the rally BJP party president Amit Shah said, "Congress had left Madhya Pradesh in a 'sick condition' but CM Shivraj Singh Chauhan has brought development in the state in every field." Shah added, "PM Modi-led BJP has worked towards making India a more safe and secure nation. While Rahul Gandhi is worried about the human rights of infiltrators, he doesn't care about the safety and human rights of the citizens of this country."

PM Modi attacks Congress and the Gandhis in Chhattisgarh

Addressing a campaign rally for the second phase of Chhattisgarh Assembly elections, Modi said, "I want to challenge them. Let some good leader of Congress outside of the family become the party president for five years, then I will say that Nehru ji really created a truly democratic system there".

Modi added, "Four generations of Congress ruled the nation and they should give an account of what they have done for the country. People have disproved that it was the "right of only one family" to speak from the ramparts of the Red Fort in Delhi," he said. "You can't understand the difficulties faced by the poor but a chaiwalla can," Modi said in a veiled attack on the Congress and the Gandhis. (PTI)

BJP only party in the country operating without any discrimination or ego: PM Modi in Ambikapur

Rahul continues his attack on Modi for favouring a few industrialists, says 'we want one Hindustan and justice'

Accusing the Narendra Modi government of favouring a few industrialists, Congress president Rahul Gandhi on Friday said, "we don’t want two Hindustans, one of handful industrialists and another of common man.’’

Addressing a rally in Devri in Sagar district of poll-bound Madhya Pradesh, the Congress leader said, "if we wanted two Hindustans, we would have hoisted two flags at Independence, one of 15-20 industrialists and one of the common man. We want one country and we want justice.’’

He said if loans running into Rs 3.5 lakh crore of industrialists could be written off, farmers' loans could also be waived, and repeated his promise of loan waiver in MP within 10 days of forming the government. "If the Congress CM does not waive off loans in 10-15 days, other (CM) will do,’’ he said.

"People of Bastar in Chhattisgarh gave a strong response to Naxals by registering record voting percentage in the first phase of Assembly polls," said PM Modi while lauding the efforts of tribal people to exercise their franchise.  BJP government has been trying hard to woo the tribal people in Chhattisgarh and counter the influence of ultras in Naxal-hit areas.

Congress chief Rahul Gandhi tweeted today announcing his visit to the poll-bound state. He addressed his first election campaign rally at Deori today where he launched a scathing attack at the Modi government.

While speaking at Ambikapur in Chhattisgarh, PM Modi targeted Gandhis saying that people have disproved that it was the "right of only one family" to speak from the ramparts of the Red Fort in Delhi:

I thank the people of Chhattisgarh for the affection. Addressing a rally in Ambikapur. Watch. https://t.co/0o4wlHYAIT 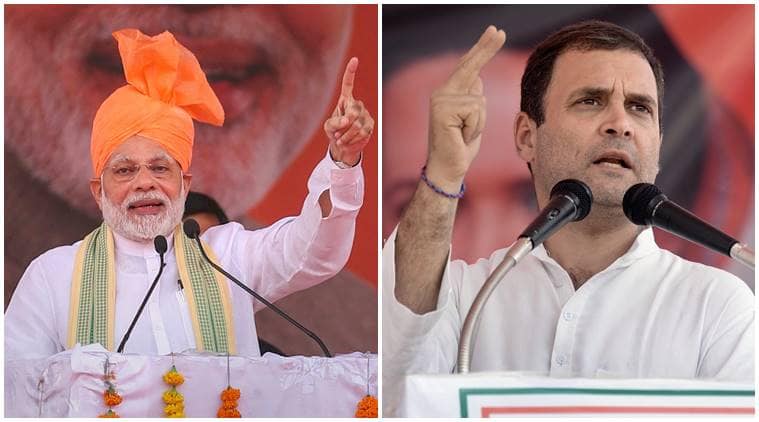 Both PM Modi and Congress chief Rahul Gandhi are engaged in a high decibel poll campaign in Chhattisgarh and Madhya Pradesh.

The campaigning for the second phase of assembly elections in Chhattisgarh has reached its peak. 72 constituencies of the state will go to polls in this phase on November 20. Battle lines have been drawn for the November 28 Madhya Pradesh elections in which 2,907 candidates will be into the fray from 230 assembly seats. Both Congress and BJP have announced a slew of welfare measures in their respective poll manifestoes for the poll-bound states.