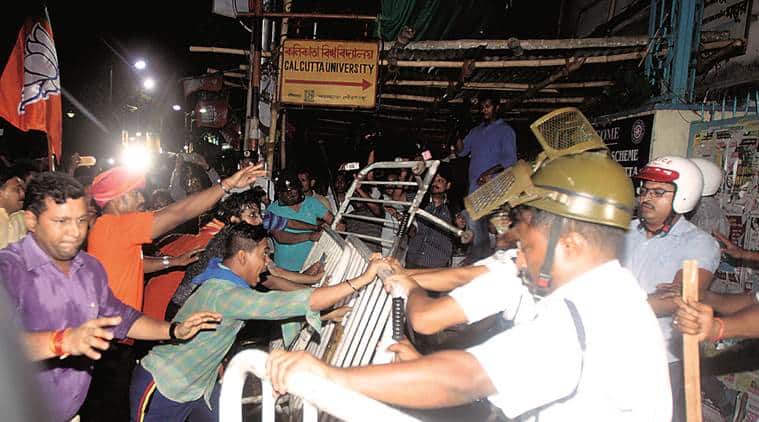 Campaigning for the last phase of Lok Sabha elections in West Bengal took a violent turn Tuesday as bottles, bricks and stones flew freely and a bust of Pandit Ishwar Chandra Vidyasagar was destroyed in pitched battles between the BJP and TMC student wing workers on the streets of Kolkata during BJP president Amit Shah’s roadshow in the city.

The clashes outside University of Calcutta’s College Street campus and Vidyasagar College on Bidhan Sarani left several injured and police told Shah to wrap up the roadshow. Kolkata Police Commissioner Rajesh Kumar said: “Over 100 people have been detained by police. We will take strong action against those who are responsible for the incidents.”

There were contesting claims on who or what sparked the free-for-all. While the TMC student wing accused the BJP workers of hurling stones and bottles at them, the BJP said their workers were attacked and forced to retaliate. During the clash at the College Street campus, BJP workers were seen hurling water bottles, one of which hit The Indian Express reporter on the head. 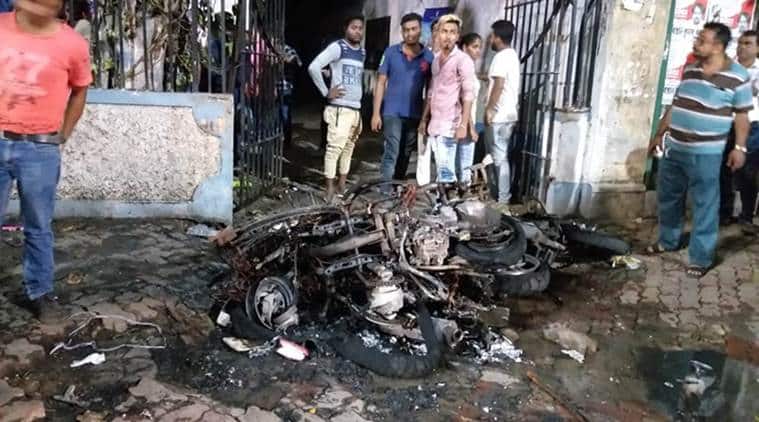 The incidents started a new war of words between Shah and Chief Minister Mamata Banerjee who leads the TMC. Prime Minister Narendra Modi too targeted the TMC. Modi told India TV he had come to know that the roadshow had an impressive start.

Calling the incident “a black chapter in democracy”, Shah said: “TMC is resorting to violence to stop us.” He said the stone-pelting and arson was the handiwork of “anti-social elements” at the “behest of the TMC”. 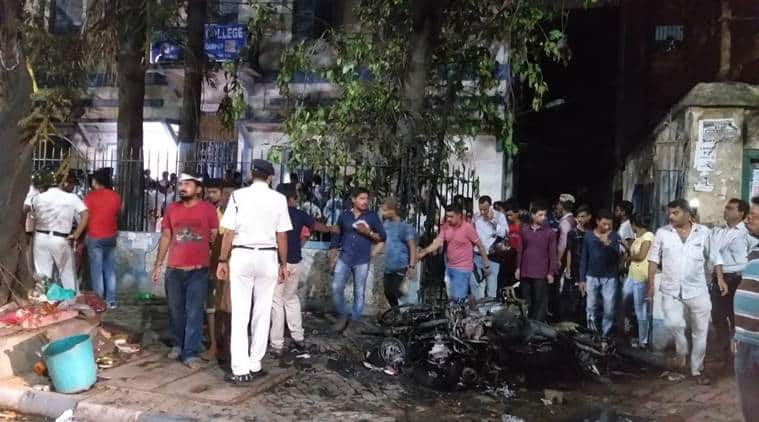 The protest also spilled over to Vidyasagar College in Bidhan Sarani, about two km from Calcutta University. (Express photo)

“Mamata Didi cannot frighten us with violence,” he said, adding that the TMC was “frustrated” because the BJP was going to win “maximum seats” in West Bengal. “Our workers and mediapersons sustained injuries in the attack by Trinamool. This incident appears to be a part of some larger conspiracy of the Mamata government. Violence has no space in democracy,” he said.

READ | On Bengal streets, Amit Shah’s show of strength, with floats and Ram

In New Delhi late night, a BJP delegation met Chief Election Commissioner Sunil Arora and the EC sought a report on the party’s allegations from its special observer. The police also lathicharged at the workers to disperse them from the institute. (Express photo)

Banerjee, in turn, accused the BJP of fomenting trouble by bringing “outsiders” to the state. At the Vidyasagar College, she told reporters: “The entire college has been vandalised and the bust of Vidyasagar has been destroyed. Two motorbikes were set ablaze. Students were also beaten up. I have never seen such a shameful incident in my life.”

“They have brought BJP goons from Rajasthan and Bihar to create riots here. Amit Shah has no idea about the reputation of Calcutta University and Vidyasagar College. Why did BJP goons attack the institutes? We have decided to take out a rally tomorrow to protest this incident,” she said.

Earlier, she told a rally in Behala: “This year we are celebrating the 200th birth anniversary of Vidyasagar but irresponsible leaders from Delhi are destroying the heritage of Bengal. I will not keep quiet and I will not spare them.” 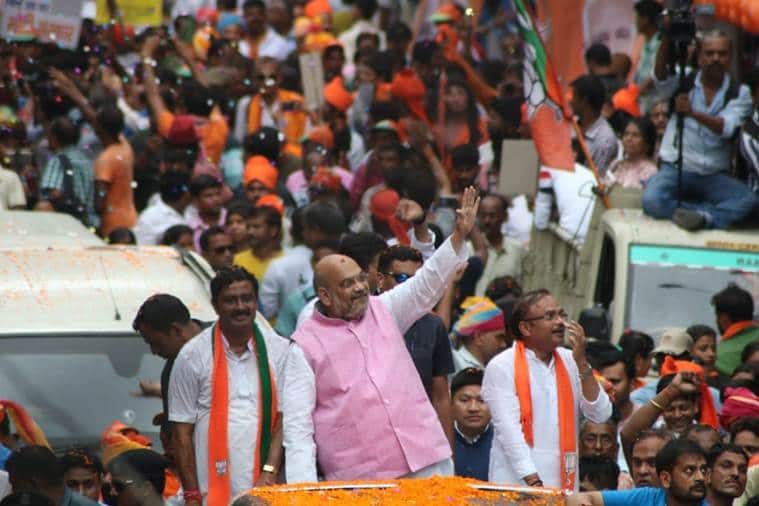 Amit Shah’s mega roadshow ahead of the final round of voting in West Bengal on Tuesday. (Express photo by Shashi Ghosh)

The first clash took place after 6 pm outside the College Street campus as Shah’s convoy passed by. Students, said to be from the Trinamool Chhatra Parishad, stood at the front gate, holding posters, black flags and shouting “go back” and “chowkidar chor hai”. BJP workers, in turn, chanted “Jai Shri Ram”. A hoarding with Amit Shah’s picture fell near the guard rail placed by police.

BJP and ABVP workers were seen confronting the students. In the violence that followed, bottles, bricks, stones, even sticks were hurled. Outnumbered, some of the policemen stationed there asked both sides with folded hands to back down. Later, the main gate of the university was closed.

The second incident took place shortly before 7 pm at Vidyasagar College on Bidhan Sarani. As the roadshow progressed, TMCP and BJP workers raised slogans and clashed. The hostel premises were vandalised, and its wooden doors forced open. A bust of Pandit Ishwar Chandra Vidyasagar was destroyed and two two-wheelers and a bicycle were set ablaze.

The two sides accused each other of starting the violence. Students alleged that several among them were injured when BJP workers hurled bricks and stones. “They entered the campus and started ransacking the office. They threw stones which left several students injured,” said Madhurima Roy, a student.

The BJP workers alleged that it was the students who hurled stones at them, forcing them to retaliate. “They incited our workers by throwing stones at us. Two of our workers were injured,” said Shyam Mandal, a BJP worker.

A huge police contingent reached the area and resorted to lathicharge to break up the protests.

TMCP state president Trinankur Bhattacharya said: “So far, we have reports of seven people being injured. But the number is likely to go up as many are still in hospital.”

TMC leader and state education minister Partha Chatterjee reached Calcutta University and Vidyasagar College to speak to the students. “Today politics has reached such an all-time low that Vidyasagar’s bust is being destroyed. These people call themselves patriots. This is the most shameful incident to have taken place in Bengal… people of the state will give them a befitting reply. They are trying to destroy our history and culture,” he said.

State BJP president Dilip Ghosh said: “Today, over one lakh people attended the roadshow. The TMC twice attacked our roadshow. Some TMC workers hurled stones at us, our workers retaliated. They tried to disrupt a peaceful rally. The TMC is desperate to stop the BJP and that’s why they are resorting to violence.”

— With Lalmani Verma in New Delhi