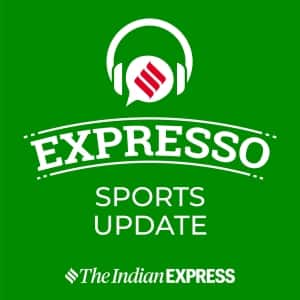 Expresso National and International Sports News Update at 3:30 pm on 2nd May

Here is the latest National and International Sports News from the Indian Express at 3:30 pm on the 2nd of May, 2022

You are listening to the Expresso Sports Update. Here is the latest news from the world of Indian and International Sports brought to you by The Indian Express.
“We begin this bulletin with some cricket news.

Cheteshwar Pujara has already put his name in the hat for a recall into the Indian test match side, scoring his second double century for Sussex in the County Championship Division Two here on Saturday.

Pujara made 203 and faced 334 balls, in which he hit 24 fours. The senior India player was batting overnight on 107, which helped his side take a substantial lead against Durham, who were all out for 223 in their first innings.

The out-of-favour India batter, who is in sparkling form, is making most of his county stint. He now has scored two hundreds and as many double centuries in his five innings.”
“The legendary Kapil Dev said he considered Gundappa Viswanath as his childhood idol and used to listen to radio commentary about the batting great’s exploits even before witnessing him play with his own eyes.

At the launch of the English Translation of Hindi commentator Jasdev Singh’s autobiography, the World Cup winning captain said, “Gundappa Viswanath was my childhood cricket idol and his image was projected by the commentary I heard on the radio. It was several years before I saw him bat with my own eyes. I built the image of wristy batsman Viswanath in my mind. Taking clues from the way the commentators used to describe his personality and his batting made him the biggest player in world cricket for me,”

”
“In some basketball news,

A jersey worn by Kobe Bryant in his rookie season, including two playoff games, will be sold at auction.

David Kohler of SCP Auctions said that the jersey from the 1996-97 season could fetch between USD 3 million and USD 5 million in an online auction that begins May 18,

Kohler said the seller approached Kohler after seeing another of Bryant’s rookie jerseys went for USD 3.69 million last year. That autographed, yellow game-worn jersey fetched the highest price ever for a basketball jersey.

The upcoming auction features the No. 8 jersey Bryant wore for the Los Angeles Lakers in regular-season wins at the old Forum on April 13, 1997, against Utah and April 17, 1997, against Sacramento.”
“In some news from the football world,

Mino Raiola, the influential and often controversial sports agent to some of soccer’s biggest players, has died. He was 54.

Raiola died after a long illness, his family confirmed on Saturday. He had been undergoing treatment at Milan’s San Raffaele hospital, where he was visited by Zlatan Ibrahimović this week. Raiola underwent surgery in January but it was said at the time that it was not life-threatening.

Raiola was the agent of stars such as Erling Haaland and Paul Pogba, as well as Ibrahimović.

Raiola was in the process of negotiating Haaland’s expected move away from Borussia Dortmund this summer, with Manchester City one of several possible destinations for the Norwegian superstar
”
“In news from Women’s football.

Defending champion Barcelona reached the Women’s Champions League final at the expense of its perfect season.

Barcelona lost the second-leg semifinal to Wolfsburg 2-0 in Germany but advanced 5-3 on aggregate.

The Spanish team had won every game in all competitions, including 5-1 over Wolfsburg in the first leg last week. Barcelona’s previous defeat was in June 2021.

The titleholder will face seven-time champion Lyon in the final on May 21 in Turin, Italy.

Lyon edged Paris Saint-Germain 2-1 in their second-leg semifinal. In an all-French tie, Lyon advanced 5-3 on aggregate after winning the first leg 3-2 last week.

The all-time top scorer in the competition, Lyon striker Ada Hegerberg, extended her record to 58.”
“Now, moving on to news from the English Premier League.

First up was Liverpool, which won at Newcastle 1-0 despite resting several players, and was briefly atop the table.

Then City won at Leeds 4-0 a few hours later to move back above Liverpool by one point and also move to within one of Liverpool’s goal difference, which is the first tiebreaker in England.

Both teams have played 34 games this season, and have four more games left to play for a shot at the Premier League title this season.”
“Everton forward Richarlison threw a lit flare back into the stand after picking it up from the field while celebrating scoring to secure a 1-0 victory over Chelsea on Sunday that helped his team’s push to avoid relegation from the Premier League.

Everton moved two points from safety with five matches remaining and a game in hand over both Leeds and Burnley. The goal came 59 seconds into the second half at Goodison Park. Richarlison and Demarai Gray pressured Chelsea defender Cesar Azpilicueta into losing possession and the Brazilian benefited by sweeping a shot past goalkeeper Edouard Mendy.

Everton are currently 18th on the table, two points away from 17th placed Leeds, and safety, having played a game less.

”
“Now, onto news from the Indian football scene.

The Santosh Trophy final will feature teams from two states with rich pedigree and a storied rivalry. Hosts Kerala, eyeing their seventh title, will look to achieve a repeat of their 2-0 group-stage win against 32-time champions West Bengal, by far the most successful team in the competition

Bengal, who are playing their 46th final, meanwhile, will try to avenge the defeat they suffered at the hands of Kerala in the title clash in 2018 on their home turf in Kolkata. In the two other meetings between the sides in finals, in 1989 and 1994, Bengal emerged winners.
”
“And finally,

The victory gave Madrid an unbeatable lead with four rounds to go. It was 17 points in front of Sevilla, which drew with Cádiz 1-1 on Friday, and 18 points ahead of Barcelona, which hosts Mallorca on Sunday.

With the title, manager Carlo Ancelotti became the first coach to lift trophies in the top five European leagues. The Italian manager won with AC Milan in Serie A, Chelsea in the English Premier League, Paris Saint-Germain in Ligue 1, and Bayern Munich in the Bundesliga.”