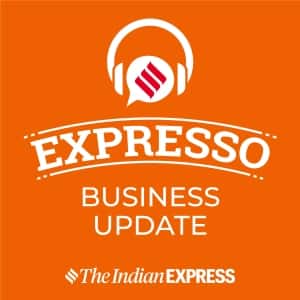 "You are listening to the Expresso Business Update. Here is the latest news from the world of Indian and International business brought to you by The Indian Express and The Financial Express.
"
Union Budget 2023 is just over a week away, and since this is the last full-year Budget before General Elections in 2024, it is expected to be a growth-oriented one with a primary focus on job creation, investment-driven growth, and infrastructure development. According to analysts at IIFL Securities, Finance Minister Sitharaman may announce more subsidies to customers to boost EV production which may lead to an increase in demand for batteries. Hence, Exide Industries is among top picks. The power sector may also be benefited from Budget announcements, and the government is expected to increase the tax on cigarettes, which make NTPC and ITC stocks attractive from a near-term perspective. Duty on luxury watches, ornaments, jewellery is likely to benefit Titan, while subsidy and development of the agri sector may directly impact Chambal Fertilizers stock. The central government has been pushing the use of technology in the agri sector, and in the upcoming Budget, it is expected to announce subsidies and planning on technology usage like usage of drones, usage of machinery to increase agri production, which may boost Godrej agrovet stock.
Next to the insurance sector, Edelweiss Tokio Life Insurance has launched Premier Guaranteed STAR, a new plan offering a simplified guaranteed income solution. In a statement, the Life insurer said that the new plan has been created based on the customer insights offered by its long-term partner CSB Bank. Sumit Rai, MD & CEO, Edelweiss Tokio Life Insurance said, quote, “In our multiple interactions with CSB Bank, we realised that customers are looking for a simple tool to manage financial contingencies and build a second income stream, which is guaranteed in nature. That’s what led to the creation of Premier Guaranteed STAR, which is a flexible, guaranteed, and transparent means of building an alternate income stream,” unquote. Premier Guaranteed STAR aims to secure an individual’s future goals and aspirations by ensuring guaranteed regular income till the policy term, provided all due premiums are paid, the insurer said.
Meanwhile, Instead of an Income Tax rate cut, Non-Resident Indians would prefer a reduction or removal of excessive TDS across asset classes through Budget 2023. In a survey conducted by Mudra Portfolio, over 92% of the 430 NRI respondents said that the reduction or removal of excessive TDS across asset classes is their key expectation from the Union Budget 2023-24. TDS reduction is important for NRIs as mostly their tax liability is less than the tax deducted at source and they have to wait till Income Tax Return filing to claim the same. At present, the TDS rate for interest on NRO accounts and deposits is 30%, while that of Long-Term Capital Gains and Short-Term Capital Gains on equities are 10% and 15% respectively. Around 85% of NRI respondents who have invested in Mutual Funds and stocks in India believe that Long-Term Capital Gains on MF/stocks should not be taxed.
Let us talk on Industry, Maruti Suzuki India on Tuesday reported over two-fold jump in its net profit to Rs 2,351.3 crore for the third quarter ended December 31, 2022, on account of robust sales aided by enhanced product portfolio. The auto major had reported a net profit of Rs 1,011.3 crore in the October-December quarter of the previous fiscal, Maruti Suzuki India said in a regulatory filing. During the third quarter of 2022-23, the company said its net sales rose to Rs 27,849.2 crore while the same stood at Rs 22,187.6 crore in the same period of 2021-22. The country’s largest carmaker said it sold a total of 4,65,911 vehicles during the third quarter of Financial Year 23. Sales in the domestic market stood at 4,03,929 units while exports were at 61,982 units in the October-December quarter, it added. In the same period of last fiscal, Maruti Suzuki India had sold 4,30,668 units comprising 3,65,673 units in the domestic market and 64,995 units in export markets. Maruti Suzuki India said the launch of models like Grand Vitara and a new version of Brezza helped it bolster market share in the high selling SUV segment and bring additional volumes.
Lastly, Indian equity indices concluded Tuesday’s volatile session flat with a positive bias. The Nifty closed above 18,100 and Bombay Stock Exchange Sensex below 61,000. The National Stock Exchange Nifty 50 ended flat risind 0.25 pts settling at 18,118.30 and BSE Sensex rose 37.08 pts or 0.06% to close at 60,978.75. The top gainers of Nifty were Tata Motors, Maruti Suzuki, Bajaj Auto, Britannia and HCL Tech while the top losers were Axis Bank, Hindalco, Dr Reddy, Power Grid and SBI Life.

Click here to listen to the morning Finance bulletin