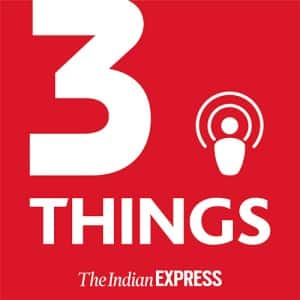 The Catch Up: 24 January

The Catch Up: 24 JanuaryThe headlines this evening from the Indian Express.

This is the Catch Up on 3 Things for the Indian Express and I'm Utsa Sarmin.

It’s the 24th of January and here are the headlines.

Amid the deepening impasse between the executive and the judiciary, Union Minister for Law and Justice Kiren Rijiju today said that the Supreme Court, making public the government’s objections on the appointment of three advocates as judges of the High Court is a serious issue. On January 19, the Supreme Court Collegium headed by Chief Justice of India D Y Chandrachud made public the government’s objections: a candidate’s sexual orientation and his “foreign-national” partner; an advocate’s critical post on Prime Minister Narendra Modi; another’s views on social media critical of the government. Responding to this, Rijuju said, “Putting secret reports in the public domain is a matter of grave concern. But I will speak about this at an appropriate time.”

In a 6,629-page chargesheet, the Delhi Police has said that Aftaab Poonawaala, the accused in the Shraddha Walkar murder case, allegedly killed her on May 18th after a fight broke out between them over Walkar meeting an old friend. Police said ‘fit of rage’ has been recorded as the motive. They also said that multiple tests - narco analysis, layered voice analysis and poly test are "in line with the investigation" and the results led them to several recoveries in the case.

India’s fabled wrestlers Sakshi Malik and Bajrang Punia today took to Twitter to express their disappointment over the Sports Ministry appointing an Oversight Committee, led by six-time boxing world champion MC Mary Kom, to run the Wrestling Federation of India (WFI). The duo said that they were assured that they would be consulted before constituting the Oversight Committee which did not happen. The committee is formed after the Sports Ministry asked the WFI president, Brij Bhushan Sharan Singh to step down when major wrestling names accused Brij Bhushan of sexual harassment.

Prime Minister Narendra Modi on Monday named 21 islands in the Andaman and Nicobar Islands after Param Vir Chakra awardees. At an online event on the occasion of Subhas Chandra Bose’s birth anniversary, Modi also unveiled the model of a proposed memorial dedicated to Bose, to be set up in the Andaman and Nicobar Islands. Modi said, “Netaji Subhas Chandra Bose will be remembered for his fierce resistance to colonial rule. Deeply influenced by his thoughts, we are working to realise his vision for India.”

This was the Catch-up on 3 Things by The Indian Express.