Kerry is expected to underline US commitment to its military alliance with South Korea, which hosts a permanent deployment of close to 30,000 US troops. 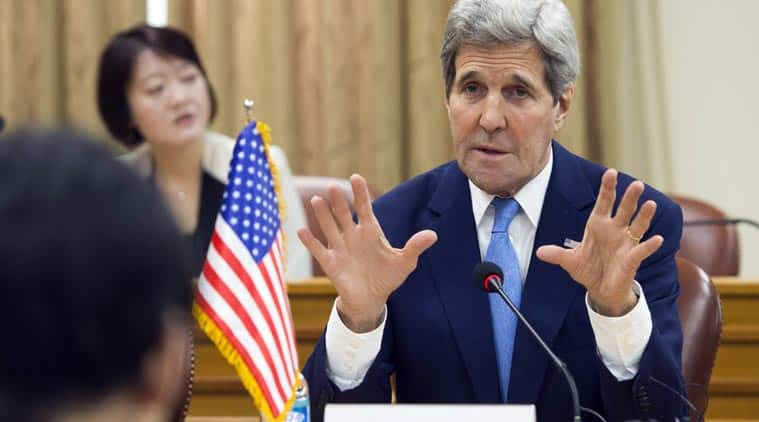 US Secretary of State John Kerry was in Seoul on Monday to discuss security issues in the wake of a new ballistic missile test by North Korea and the reported execution of its defence chief.

After meeting with President Park Geun-Hye and other senior South Korean officials, Kerry was due to deliver a comprehensive policy speech on cyberspace, which has become another outlet for North Korean belligerence.

In an effort to revive long-stalled denuclearisation talks, Washington has made it clear in recent months that it is open to preliminary discussions with Pyongyang, but that process has been complicated by some significant North Korean military muscle flexing.

Just over a week ago, the North said it had successfully test-fired a submarine-launched ballistic missile (SLBM)- a technology that could eventually offer the nuclear-armed state a survivable second-strike capability. UN sanctions ban Pyongyang from using ballistic missile technology.

While North Korean leader Kim Jong-Un hailed the acquisition of a “world-class strategic weapon,” US defence officials sought to play down the test, saying Pyongyang was still in the earliest stages of developing an SLBM capability.

Nevertheless, in Beijing at the weekend, Kerry slammed the North’s “destabilising” behaviour as “unacceptable.” Internal stability in North Korea has also become a concern after South Korea’s intelligence agency reported last week that Pyongyang’s defence minister had been purged and most likely executed.

The agency said it had unverified reports that the execution had been carried out at close range with a high-calibre anti-aircraft gun. Some observers said the execution, if confirmed, suggested Kim was still struggling to cement his absolute authority in a country that has been ruled by the Kim family dynasty for seven decades.

During his talks with Park and other officials, Kerry is expected to underline US commitment to its military alliance with South Korea, which hosts a permanent deployment of close to 30,000 US troops.