Malaysia Airlines Flight MH370 disappeared soon after taking off on March 8 from Kuala Lumpur bound for Beijing with 227 passengers and 12 crew on board. 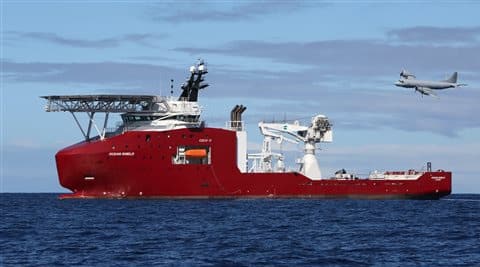 The extensive search of MH370 and rescue operation has so far included assets from 26 countries. (AP)

The search for a missing Malaysia Airlines jetliner resumed on Saturday, five weeks after the plane disappeared from radar screens, amid fears that batteries powering signals from the black box recorder on board may have died.

Australian Prime Minister Tony Abbott warned on Friday that  signals picked up during the search in the remote southern Indian Ocean, believed to be “pings” from the black box recorders, were fading.

Malaysia Airlines Flight MH370 disappeared soon after taking off on March 8 from Kuala Lumpur bound for Beijing with 227 passengers and 12 crew on board, triggering a multinational search that is now focused on the Indian Ocean.

Search officials say they are confident they know the approximate position of the black box recorder, although they have determined that the latest “ping’, picked up by searchers on Thursday, was not from the missing aircraft.

Batteries in the black box recorder are already past their normal 30-day life, making the search to find it on the murky sea bed all the more urgent. Once they are confident they have located it, searchers then plan to deploy a small unmanned “robot” known as an Autonomous Underwater Vehicle.

“Work continues in an effort to narrow the underwater search area for when the Autonomous Underwater Vehicle is deployed,” the Australian agency coordinating the search said on Saturday.

“There have been no confirmed acoustic detections over the past 24 hours,” it said in a statement.

The black box records data from the cockpit and conversations among flight crew and may provide answers about what happened to the plane, which flew thousands of kilometres off course after taking off.

The mystery has sparked the most expensive search and rescue operation in aviation history.

Malaysia’s government has begun investigating civil aviation and military authorities to determine why opportunities to identify and track the flight were missed in the chaotic hours after it vanished.

Analysis of satellite data has led investigators to conclude the Boeing 777 crashed into the ocean somewhere west of the Australia city of Perth. So far, four “ping” signals, which could be from the plane’s black box recorders, have been detected in the search area in recent days by a U.S. Navy “Towed Pinger Locator”.

“We are now getting to the stage where the signal from what we are very confident is the black box is starting to fade and we are hoping to get as much information as we can before the signal finally expires,” Abbott said on Friday.

The extensive search and rescue operation has so far included assets from 26 countries.

Australia’s Ocean Shield, which has the towed pinger locator on board, is operating in a smaller zone, just 600 sq km (232 sq miles) about 1,670 km (1,040 miles) northwest of Perth. That is near where it picked up the acoustic signals and where dozens of sonobuoys capable of transmitting data to search aircraft via radio signals were dropped on Wednesday.

Experts say the process of teasing out the signals from the cacophony of background noise in the sea is slow and exhausting. An unmanned submarine named Bluefin-21 is on board the Ocean Shield and could be deployed to look for wreckage on the sea floor some 4.5 km (2.8  miles) below the surface once a final search area has been identified.