Ebola has killed more than 1,400 people across West Africa in the countries of Liberia, Guinea, Sierra Leone and Nigeria. 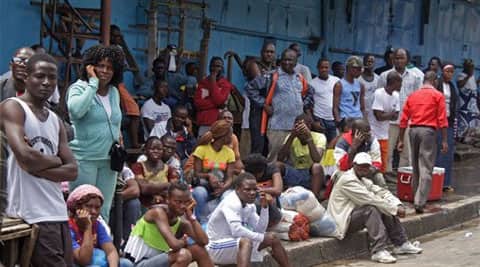 People wait for Liberian security forces to allow them to deliver foodstuff to friends and family members in the West Point area that has been hardest hit by the Ebola virus. (Source: AP)

A Liberian doctor who was among three Africans to receive an experimental Ebola drug has died, the country’s information minister said on Monday, as a top U.N. delegation promised more help for countries battling the virulent disease during a visit to Sierra Leone.

Dr. Abraham Borbor, the deputy chief medical doctor at Liberia’s largest hospital, had received the untested drug, ZMapp, after it was given to two Americans. After receiving medical car in the U.S. they later survived the virus that has killed about half of its victims.

A Spanish missionary priest infected with Ebola also received the treatment but died. There was no update given on the two other Liberians who took the last known available doses of ZMapp.

Borbor “was showing signs of improvement but yesterday he took a turn for the worse,” and died Sunday, Information Minister Lewis Brown told The Associated Press.

Ebola has killed more than 1,400 people across West Africa in the countries of Liberia, Guinea, Sierra Leone and Nigeria. A separate Ebola outbreak emerged over the weekend in Congo, though experts say it is not related to the West African epidemic.

In Sierra Leone, the World Health Organization said Monday it is replacing its country representative. More international help is badly needed, said Dr. David Nabarro, who is coordinating the U.N.’s response to the Ebola crisis.

“The effort to defeat the Ebola disease is not a battle but a war that requires everybody to work together and effectively, and it is not easy to make a judgment as to whether we are winning the war or losing it,” he told journalists at a news conference in the capital.

There is no proven vaccine or cure for the disease that can cause a grisly death with bleeding from the eyes, mouth and ears. The virus can only be transmitted through direct contact with the bodily fluids of the sick or from touching victims’ bodies, leaving doctors and other health care workers most vulnerable to contracting it.

Only six people in the world are known to have received ZMapp. The small supply is now said to be exhausted and it is expected to be months before more can be produced by its U.S. maker.

Health experts caution that the drug had never been tested in humans before and it is unclear whether it works.

They note there is a huge gap between the treatment the two Americans got at an Atlanta hospital, where five infectious disease experts and 21 nurses provided rigorous care, and West Africa, where even such basics as sterile fluids can be in short supply.