The 40 year-old conflict between Morocco and the Polisario Front which claims independence for Polisario, has also led to icy relations with Algeria which supports the Front. 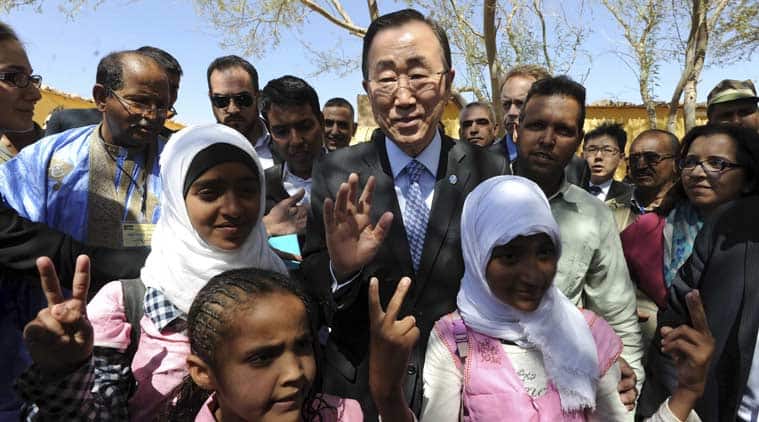 UN Secretary-General Ban Ki-moon said on Sunday that there was “no real progress” in negotiations to reach a political solution in the 40-year-old Western Sahara conflict and he has asked his special representative to try to restart talks.

Ban, speaking to reporters in Algiers after visiting refugee camps in southern Algeria, said he wants Christopher Ross to take up visits once again with Morocco and the Polisario Front, which for decades has claimed independence for the vast territory and its Sahraoui people. Morocco annexed the mineral-rich territory in 1975 after Spain withdrew and developed parts of the land, which it considers an integral part of Morocco.

Ban met with refugees in Tindouf, in southern Algeria, as well as with UN troops patrolling the area and said they remain ready to organize a referendum “if there is an agreement between the parties.” He said he would travel shortly to Laayoune, the headquarters for the UN — and in what Morocco considers its territory.

“The parties in the conflict have made no real progress in negotiations that were to lead to a politically just, lasting and acceptable solution for all, founded on self-determination for the people of the Western Sahara,” Ban said.

He said he was “profoundly saddened by this human tragedy,” with the world neglecting the situation of the Sahraouis, the natives of the Western Sahara.

The conflict has led to icy relations between the two North African neighbors, Morocco and Algeria, which supports the Polisario. Algerian Foreign Minister Ramtane Lamamra, standing with the UN chief, said an eventual referendum must be “transparent” and held in “favorable conditions” for the Sahraoui people.

Efforts in the past to organize a referendum fell apart over who should vote.