Former Iran president Rafsanjani said “Abdul Qadeer Khan believed that the Islamic world had to have a nuclear bomb... The Pakistanis agreed to help us somewhat”. 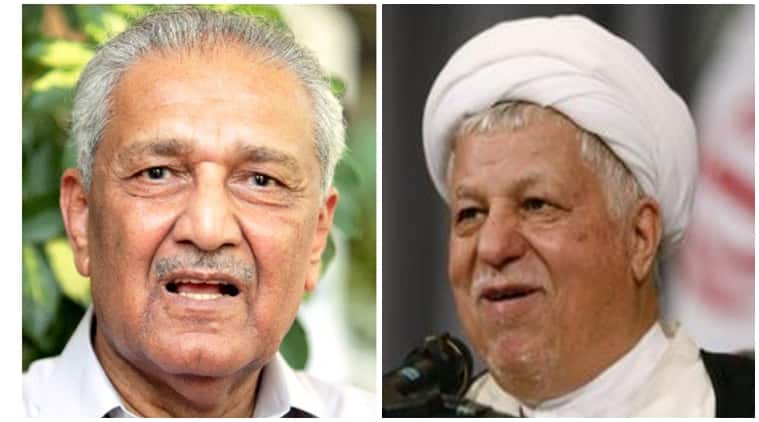 Former Iran president Rafsanjani said “Abdul Qadeer Khan believed that the Islamic world had to have a nuclear bomb… The Pakistanis agreed to help us somewhat”.

Former Iranian president Akbar Hashemi Rafsanjani has confirmed that his country received nuclear technology from Pakistan. The assertion, made in an interview published on Thursday, undermines Islamabad’s long-standing claims that its supply of technology and material to Iran, Libya and North Korea was the work of a rogue network run by the country’s former nuclear czar, Abdul Qadeeer Khan.

In an interview published by website Iran’s Nuclear Hope, Rafsanjani says “Abdul Qadeer Khan believed that the Islamic world had to have a nuclear bomb… The Pakistanis agreed to help us somewhat”.

“We were at war, and we wanted to have such an option for the day our enemies wanted to use nuclear weapons. This was our state of mind,” said the former Iranian president.

The AQ Khan network is suspected to have supplied Iran with designs for its P1-type aluminium-rotor centrifuges, during a visit the scientist made to its Bushehr nuclear facility in 1986, Later, in between 1994 and 1996, Iran received components for 500 centrifuges, a deal that was followed up with designs for the more advanced P2 centrifuges, which began operating from 2002.

Iran admitted to International Atomic Energy Agency investigators that it had met thirteen times with what it described as “the clandestine supply network” between 1994 and 1999. Now the head of Iran’s Expediency Discernment Council — an advisory body exercising oversight over policy-making and administration — Rafsanjani says in the interview that he personally travelled to Pakistan to set up the nuclear deal.

Following the breakdown of German technical cooperation with Iran’s nuclear programme in the wake of the 1979 revolution, he said: “We began to talk with the Pakistanis. In Pakistan, there was a scientist named Abdul Qadeer Khan. I took a trip to Pakistan, and I wanted to see him, but they did not let me…. I went twice to Pakistan, but I didn’t see him.”

The timeline revealed by Rafsanjani confirms reports that Iran-Pakistan nuclear cooperation was sanctioned by military ruler General Muhammad Zia-ul-Haq, who held power until his assassination in 1988.

In a 2004 article, the journalist Kamran Khan had quoted a Pakistani scientist as saying the General’s intent “to play around but not to yield anything substantial”.

These men, IAEA inspectors found, provided the Iranians with a one-page handwritten note, offering disassembled centrifuge, technical drawings, calculations, and parts for 2000 machines. Iran told IAEA inspectors that in addition to the centrifuge-related specifications and equipment, the Pakistani network also turned over a document detailing how to shape enriched uranium for use in a bomb.

Later, in an 11-page note to Pakistani investigators, Khan said Iran had offered $10 billion for three atomic bombs. The deal, he claimed, was pursued by top Iranian official Ali Samkhani on a visit to Islamabad in 1990. Samkhani’s demands that Pakistan deliver on the deal, Khan claimed, were discussed with then prime minister Benazir Bhutto. In a 2009 interview — given after he had served five years under house imprisonment — Khan said that “since Iran was an important Muslim country, we wished Iran to acquire this technology”. “Iran’s nuclear capability will neutralise Israel’s power,” he added.

Khan earlier lamented, in a 1995 speech, that “developments made by certain Muslim states in the restricted technologies does not trickle down to others because of international pressure”.

General Mirza Aslam Beg, who succeeded General Zia as army chief, appears to have pushed Prime Minister Bhutto to seal the bomb deal. His support for selling nuclear weapons technology, many experts believe, that was driven by his doctrine of “strategic defiance”, which envisaged a strategic partnership between Islamabad, Kabul, Tehran and Ankara.

Even as the nuclear trafficking was underway, Beg threatened US Assistant  Secretary of Defense for International Security Affairs, Henry Rowen, that “if Pakistan was cut off [from military assistance] it might be forced to share nuclear technology with Iran”. Robert Oakley, then US ambassador to  Pakistan, has also said Beg  considered an oil-for-bombs deal with Iran.

The trafficking picked up again in 1994 under the watch of General Abdul Waheed, despite a deterioration in Iran-Pakistan relations, brought about  by Islamabad’s backing of its proxies in Afghanistan.

It is unclear if Prime Minister Nawaz Sharif, who held power for significant periods during this time, was also informed about the Iran  relationship.