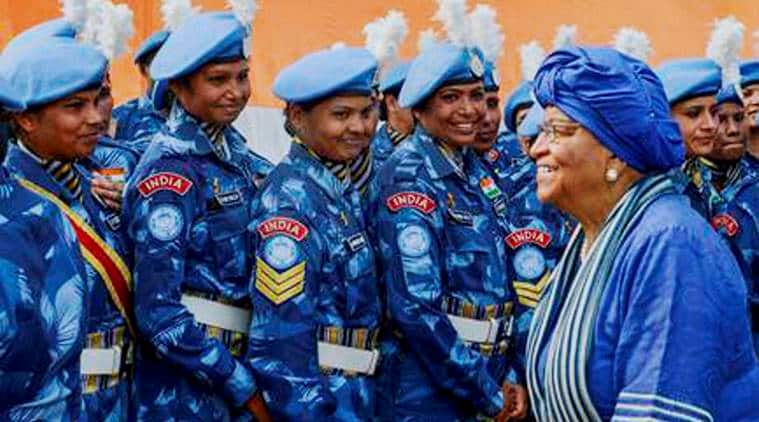 Liberian President Ellen Johnson Sirleaf greeting female Indian Peacekeepers of the United Nations Mission in Liberia (UNMIL) during their farewell ceremony in Monrovia on Tuesday, ahead of their return to India. (PTI Photo)

Liberian President Ellen Johnson Sirleaf has thanked India’s first-ever all-woman UN peacekeeping unit that was deployed in the war-torn African nation as it prepares to depart the country after a nine-year tour of duty.

It will depart the country on February 14, as Liberia gets ready to assume full responsibility for national security amid the ongoing UNMIL drawdown.

“The contribution you have made in inspiring Liberian women, imparting in them the spirit of professionalism and encouraging them to join operations that protect the nation; for that we will always be grateful,” Sirleaf said.

“Our security service now has 17 per cent women – we owe all that to you, because it was not even one per cent a few years ago. And these women want to emulate you in the way you’ve served this country,” she said.

Special Representative of the UN Secretary-General Farid Zarif said the Indian unit leaves behind a legacy of true and dedicated service in support of Liberia and the Liberia National Police and in service to the Liberian people.

“You should be proud that by your presence, you have made tremendous contribution by bringing greater stability, confidence and assisting in the strengthening of the capacities of the Liberia National Police,” Zarif said, at a farewell programme held in honour of the contingent by UNMIL at the Headquarters of the Indian Formed Police Unit in Congo Town, outside Monrovia.

“If I had my will, I would have recommended for another unit of the United Nations Mission in Liberia to leave, so that the Indian Formed Police Unit would continue its stay in the country for the time being,” Sirleaf told the contingent.

The Indian contingent’s service to the country was vital in restoring peace and serves as an encouragement to Liberian women who are now contributing 17 per cent to the security sector of their own country, she noted.

She said during their stay in Liberia, they demonstrated courage, commitment, discipline and professionalism, which were the hallmark of their service to Liberians, during their nine-year tour of duty in Liberia.

Sirleaf said she was impressed by the alertness of the Indian Formed Police Unit on many occasions especially during late working hours when they were seen performing their duties.