Conflict watch: From Syria to Afghanistan, all you need to know about the week that was 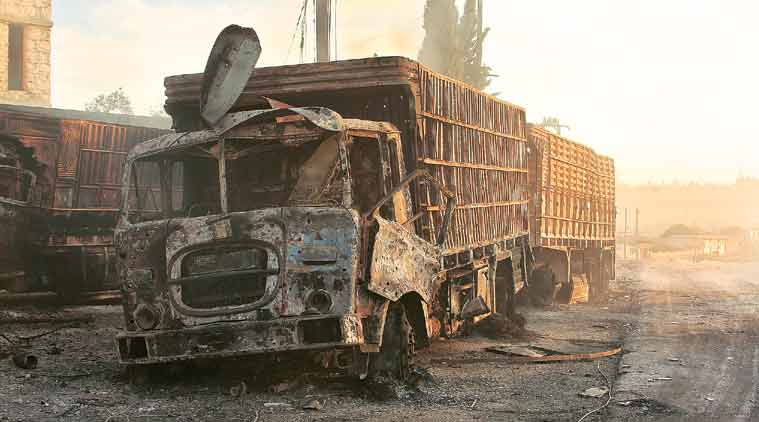 Around 20 people were killed in Tuesday’s attack on the UN aid convoy headed to Aleppo. (Source: Reuters)

UNITED STATES: A man stabbed nine people at a mall in central Minnesota before being shot dead by cops. Islamic State, through it media agency later said the attack is its “soldier”. The man allegedly made references to Allah and asked at least one person if they were Muslim before he assaulted them at the Crossroads Center mall in St Cloud last Saturday. Meanwhile on Friday, a gunman opened fire with a rifle at a Washington state mall, killing five people. The gunman was captured on Saturday and was identified as Arcan Cetin, 20, a resident of Oak Harbor, Washington.

THAILAND: Three policemen were killed and two wounded on Friday in a bomb and gun attack in the southern province of Yala where Muslim separatists have been waging a simmering insurgency against the state. The attack came just over a month after a series of bombs in three of Thailand’s main tourist towns killed four people.

PAKISTAN: Three soldiers were killed in an ambush in Peshawar last Sunday, militants said, in an attack for which both Islamic State and a Pakistani Taliban faction claimed responsibility. Militants said they ambushed an unmarked vehicle ferrying soldiers near the congested Daudzai area of Peshawar.

SYRIA: After a fragile truce, brokered by Russia and United States, fell apart due to an attack on a United Nations aid convoy headed to Aleppo that left 20 aid workers and civilians dead, Syrian and Russian warplanes began an extensive bombing campaign over the city which has been under seige for a month. Planes flattened buildings as more than 250,000 civilians remain trapped in the besieged opposition sector. On Saturday, in their first major ground advance of the offensive, the Syrian army and its militia allies seized control of the Handarat Palestinian refugee camp, a few kilometres north of Aleppo, only for rebels to counterattack a few hours later.

NIGERIA: Suspected members of the militant group Boko Haram killed six people on Monday in an attack on a commercial convoy being escorted by the army in Nigeria’s northeastern state of Borno.

IRAQ: Eighteen people, including two children, were killed on Saturday when militants shot at a checkpoint north of Tikrit and then set off two bombs at the entrance to the Iraqi city. The attack was later claimed by Islamic State. It was the first such assault since Tikrit, 150 km north of Baghdad, was retaken from the ultra-hardline jihadist group in April 2015. Meanwhile, Turkish armed forces shelled a Kurdish militant target in northern Iraq on Tuesday and killed four rebels, military sources said.

YEMEN: Around 26 civilians were killed and 60 wounded when an Arab coalition airstrike hit the rebel-held port city of Hodeidah in western Yemen. Media reports after the attack claimed that the strike had been carried out on a residential building. The alliance said it was looking into the report. Meanwhile, as the conflict raged on across Yemen, coalition airstrikes another killed nine people in Houthi-controlled Ibb city late on Saturday.