Kenyan President Uhuru Kenyatta said in a statement that the Shebab would "have no time to breathe" and vowed revenge. 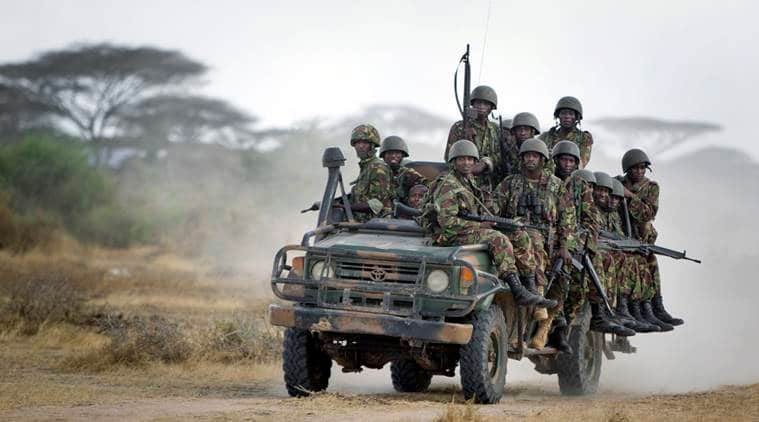 At least five police officers died in a roadside bomb attack in eastern Kenya, police and reports said Wednesday, as troops inside Somalia pulled out of some bases after Islamist attacks.

Kenyan police chief Joseph Boinnet confirmed “there was an incident where a police lorry hit an improvised explosive device” on Tuesday, but gave no casualty toll.

One senior police officer, who asked not to be named, said five officers were killed in the blast as the truck drove towards Mpeketoni, in the coastal Lamu region.

Officials have been reluctant to give numbers of those killed in attacks after Shebab militants stormed a Kenyan army base at El-Adde in southwest Somalia, in the latest incident of an African Union Mission in Somalia (AMISOM) base being overrun by the Al Qaeda-linked group.

Kenyan President Uhuru Kenyatta said in a statement that the Shebab would “have no time to breathe” and vowed revenge.

He is due to attend a memorial service on Wednesday, alongside visiting Nigerian President Muhammadu Buhari.

The blast targeting police came as Kenyan soldiers inside Somalia pulled out of some of its bases in southern Somalia.

The army however said it was not leaving Somalia and remained committed to the fight.

“There is a reason that took us to Somalia, which is to liberate and pacify those areas, and the mission is still on,” army spokesman David Obonyo said.

“Shebab fighters entered without fighting and have started addressing the people. Both the Kenyan and the Somali troops emptied their positions,” said Ahmed Gure, another elder.