Vladimir Putin’s close friends are players in a clandestine network that has shuffled at least $2 billion through banks and offshore companies. 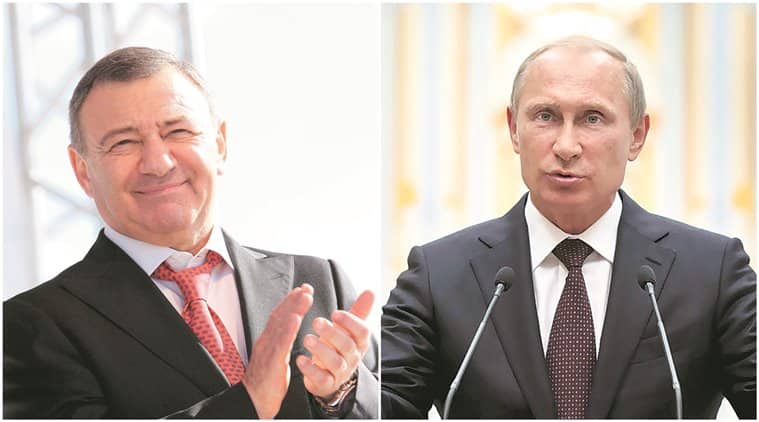 Vladimir Putin and Sergey Roldugin forged a bond as young men. Fast friends, almost like brothers, they cruised the streets of Leningrad, singing and, in Putin’s case, occasionally getting into fistfights.

As Putin rose to power as Russia’s supreme leader and Roldugin made a name for himself as a classical cellist and conductor, the two remained close. Roldugin has performed for Putin and high-profile guests at the president’s official residence and has given media interviews that softened Putin’s fearsome image.

Now a leak of secret documents reveals another, hidden side of their friendship.

The records show Roldugin is a behind-the-scenes player in a clandestine network operated by Putin associates that has shuffled at least $2 billion through banks and offshore companies, an investigation by the International Consortium of Investigative Journalists, German daily Süddeutsche Zeitung and other media partners has found.

In the documents, Roldugin is listed as the owner of offshore companies that have obtained payments from other companies worth tens of millions of dollars. It’s possible Roldugin, who has publicly claimed not to be a businessman, is not the true beneficiary of these riches. Instead, the evidence in the files suggests Roldugin is acting as a front man for a network of Putin loyalists — and perhaps for Putin himself.

Roldugin did not respond to detailed questions.

About 100 financial deals related to the network are described in the leaked documents. They are complex. Payments are disguised in various ways. On paper, shares in companies are swapped back and forth in a day. Documents are backdated. Questionable financial penalties are assessed. The rights to multimillion-dollar loans are sold between offshore companies for $1.

In almost every instance, the result is the same: money and power moves in the direction of the network, to companies and people allied to Putin.

The leaked documents come from the files of Mossack Fonseca, a Panama-based law firm that registered some of the Roldugin companies and helped administer the network’s holdings in the British Virgin Islands and other offshore havens.

For years there have been reports — mainly from whistleblowers — about Putin’s secret wealth. Yet a detailed picture of the hidden financial affairs of Putin’s circle has remained elusive.

Loyalty and long-held relationships help bind the network together. It’s a fraternity of Putin confidants.

There is Roldugin, who is godfather to Putin’s eldest daughter. Then there is Yury Kovalchuk, a banker who forged links with the future president when Putin was a municipal official, and Arkady Rotenberg, a childhood chum who has become a billionaire through state-sponsored construction projects, oil pipelines and other ventures.

Many of the men linked to the network, including Putin, share something else in common besides history. They are connected to the St Petersburg-based Bank Rossiya, which the US government has identified as Putin’s personal cashbox.

The economic model for how members of Putin’s circle have shared the profits from this network was also established back in St Petersburg. In the 1990s, Putin and Bank Rossiya owners created a cooperative for a gated community where they all had houses. The cooperative kept a bank account in common. Each could put money in, and anyone could take it out.

Nowhere in the Mossack Fonseca files is the name of the Russian president, a former KGB spymaster, actually mentioned. Audio recordings and witness accounts show that even when Putin’s closest confidants privately discuss his financial dealings, they use pseudonyms for him or simply gesture to the heavens rather than utter his name.

After receiving detailed questions from ICIJ and its media partners, Kremlin spokesman Dmitry Peskov denounced the forthcoming articles in a press conference as “an attack” and “a series of fibs,” according to Russian news services.

There is a video on YouTube of Arkady Rotenberg, a former judo instructor who became a billionaire thanks to Putin. He is standing with a group of men. Putin walks past, flanked by his security detail. Rotenberg doesn’t see him coming. Without breaking stride, Putin rubs Rotenberg’s head, mussing his hair, like one would a dog or a child.

Of all those in his inner circle, Arkady and his brother Boris Rotenberg have known Putin the longest. Their friendship dates to the 1960s, when as boys they sparred together in a martial arts club.

The European Union and the US government issued sanctions against Arkady Rotenberg in 2014, in retaliation for Putin’s invasion of Ukraine.

The US also sanctioned his brother Boris. The US Treasury noted the two had “amassed enormous amounts of wealth during the years of Putin’s rule” from Russian government contracts, including roughly $7 billion for the Sochi Olympic games.

Arkady Rotenberg did not respond to a request for comment.

When it comes to Sergey Roldugin, the documents in the files falsely state that he is not politically connected, obscuring the musician’s role in the scheme.

There’s no question that Roldugin and Putin are close. Some publications have called him Putin’s best friend. In the early 1980s, Roldugin arranged a double date on which Putin met his future wife, Lyudmila. Putin selected Roldugin to be the godfather of his first child, Maria, a sacred role in Russian Orthodox tradition. A photo of Putin cradling Maria, beside his wife and Roldugin can be readily found on the Internet.

Banks are required by law in Switzerland to determine if account holders are connected to politicians to safeguard against improper use of the account. The industry term for this is “politically exposed persons,” or PEPs.

The Mossack Fonseca files contain an application by Gazprombank Switzerland in 2014 to open a bank account for a company in Roldugin’s name. The form explicitly asked whether the owner of the company had “any relation to PEPs or VIPs.” The answer: “no.”

Yury Kovalchuk and Putin turned their attention to Bank Rossiya in 1991. At that time, Putin was deputy mayor and the person responsible for attracting foreign investors and forming public-private partnerships. After the fall of the Soviet Union in December 1991, Putin signed the documents bestowing ownership of the bank on a newly formed joint venture created by Kovalchuk and others, according to Dawisha, author of ‘Putin’s Kleptocracy: Who Owns Russia?’

Kovalchuk became majority shareholder and board chair of this new version of Bank Rossiya. When the US government sanctioned him in 2014, it described Kovalchuk as one of Putin’s “cashiers.”

In the mid-1990s, Kovalchuk and a few other shareholders of the bank owned dachas on the eastern shore of the Komsomolskoye Lake. Putin found the money to buy a property. The men formed a co-operative society to benefit the eight residents of their shared gated community, which was called Ozero (the Lake). The Mossack Fonseca files show that the communal principles that defined Ozero continued with Bank Rossiya and its participants more than a decade later.

In September 2009, a Mossack Fonseca compliance officer flagged a transaction for $103 million involving a company called Sandalwood Continental Limited. The manager for Bank Rossiya that was arranging the transaction wanted Mossack Fonseca’s directors to approve it but its size seemed worrisome.

Sandalwood was the lynchpin of the entire Putin-linked network. One of Sandalwood’s roles appeared to be to borrow $103 million from the Russian Commercial Bank (RCB) in Cyprus, which in turn was backed by Moscow-based, state-controlled bank, VTB.

The owner on paper of Sandalwood was Oleg Gordin, a small businessman with a background in “law enforcement agencies.”

Gordin did not respond to a request for comment.

The loans RCB made to Sandalwood were highly unusual. They went to a borrower who had no discernible business model, and they carried no security. Most relied on a promise that the entire amount would be returned after a certain time span.

RCB’s Maratheftis said the bank “was always in full compliance with the Anti-Money Laundering Regulatory Framework.”

According to an analysis of the Mossack Fonseca data by ICIJ and its reporting partners, about $2 billion passed through the network between 2008 and 2013, most of it through Sandalwood Continental.

In 2014, Mikhail Lesin, was intimately involved in the efforts of Putin and Bank Rossiya to control Russian media, resigned from Gazprom-Media. He was Putin’s first media minister, then a presidential adviser in his second term and he oversaw the regime’s propaganda push. Russian press reports blamed a conflict between him and Bank Rossiya’s Kovalchuk. Lesin relocated to America, where he allegedly owned millions of dollars in property.

In November 2015, Russian media reported that Lesin died of a heart attack in a hotel in Washington, DC. Four months later, Washington’s chief medical examiner said Lesin died of blunt force trauma to the head and had bruises on his neck, torso and limbs. Police are investigating the death.

How many secrets of the Putin-linked network Mikhail Lesin took to the grave may never be known.