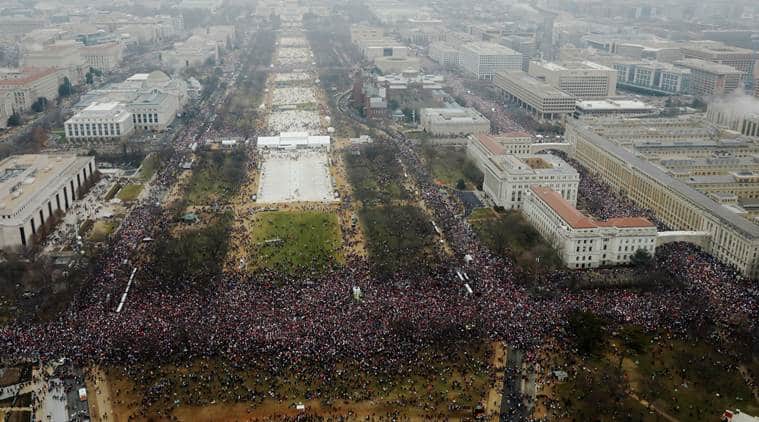 Demonstrators take part in the Women’s March to protest Donald Trump’s inauguration as the 45th president of the United States near the US Capitol in Washington, January 21, 2017. REUTERS/Lucas Jackson

Women turned out in unexpectedly large numbers in major US cities on Saturday to stage mass protests against US President Donald Trump, in a sign of the strong public opposition the Republican may face in office.

Hundreds of thousands of women — many wearing pink knit hats — marched through downtown Washington, and also thronged the streets of New York, Los Angeles, Chicago and Boston to rebuke Trump on his first full day in the White House. Trump has angered many liberal Americans with comments seen as demeaning to women, Mexicans and Muslims, and worried some abroad with his inaugural vow on Friday to put “America First” in his decision making.

The Women’s March on Washington appeared to be larger than the crowds that turned out the previous day to witness Trump’s inauguration on the steps of the US Capitol.

Organizers of the protest had told police they expected 200,000 people to attend but the crowd looked substantially bigger than that, stretching for about a mile (1.6 km). Thousands filed past the White House and were ushered back by Secret Service officers on horseback.

A planned march in Chicago grew so large that organizers did not attempt to parade through the streets but instead staged a rally. Chicago police said more than 125,000 people attended. The protests illustrated the depth of the division in the country which is still recovering from the 2016 campaign season. Trump stunned the political establishment by defeating Democrat Hillary Clinton, the first woman nominated for president by a major US party. “We’re just disturbed by everything Trump wants to do,” said Bonnie Norton, 35. She and Jefferson Cole, 36, brought their 19-month-old daughter Maren to the Washington march.

Although his party now controls both the White House and Congress, Trump faces entrenched opposition from segments of the public as he takes office, a period that is typically more of a honeymoon for a new president. A recent ABC News/Washington Post poll found Trump had the lowest favorability rating of any incoming US president since the 1970s.

Thousands of women also took to the streets of Sydney, London, Tokyo and other cities in Europe and Asia in “sister marches” against Trump. Trump wrote on Twitter on Saturday that “I am honored to serve you, the great American People, as your 45th President of the United States!” but made no mention of the protests. He attended an interfaith service at Washington National Cathedral.

The Washington march stressed the city’s Metro subway system, with riders reporting enormous crowds and some end-of-line stations temporarily turning away riders when parking lots filled and platforms became too crowded. The Metro reported 275,000 rides as of 11 a.m. (1600 GMT) Saturday, 82,000 more than the 193,000 reported at the same time on Friday, the day of Trump’s inauguration and eight times normal Saturday volume. 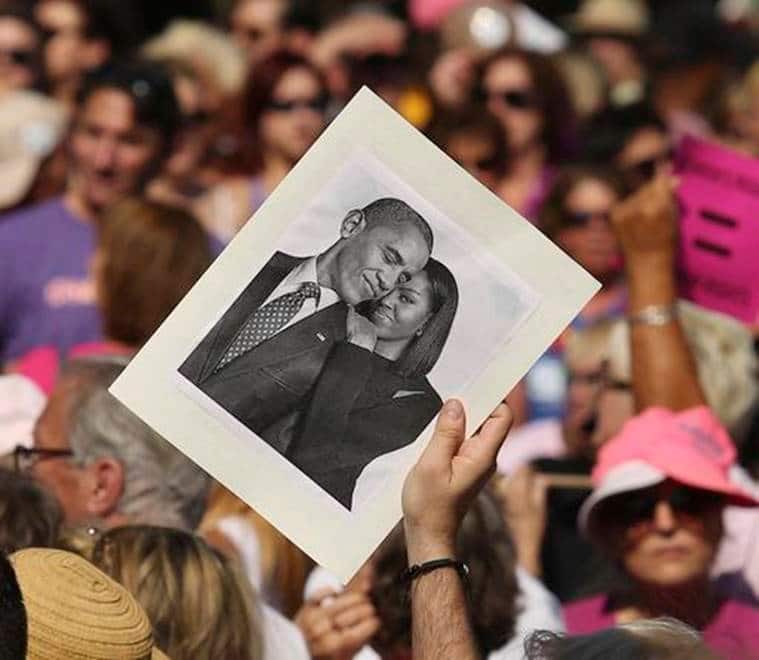 A photo of former President Obama is held up during a Central Florida Women’s Rally at Lake Eola Park on Saturday, Jan. 21, 2017. (Stephen M. Dowell/Orlando Sentinel via AP)

By afternoon, the protest rally had been peaceful, a sharp contrast to the day before when black-clad anti-establishment activists smashed windows, set vehicles on fire and fought with riot police who responded with stun grenades. Many protesters on Saturday wore knitted pink cat-eared “pussyhats,” a reference to Trump’s claim in the 2005 video that was made public weeks before the election that he grabbed women by the genitals.

The Washington march featured speakers, celebrity appearances and a protest walk along the National Mall. Crowds filled more than ten city blocks of Independence Avenue in downtown Washington, with more people spilling into side streets and onto the adjoining National Mall. In the crowd were well-known figures including Madonna and former U.S. Secretary of State John Kerry, who waved to supporters as his walked his yellow Labrador dog, Ben.

Clinton won the popular vote in the Nov. 8 presidential election by around 2.9 million votes and had an advantage among women of more than 10 percentage points. Trump, however, easily won the state-by-state Electoral College vote which determines the winner.

Trump offered few if any olive branches to his opponents in his Friday inauguration speech in which he promised to put “America First.” “He has never seemed particularly concerned about people who oppose him, he almost fights against them instinctively,” said Neil Levesque, executive director of the New Hampshire Institute of Politics. 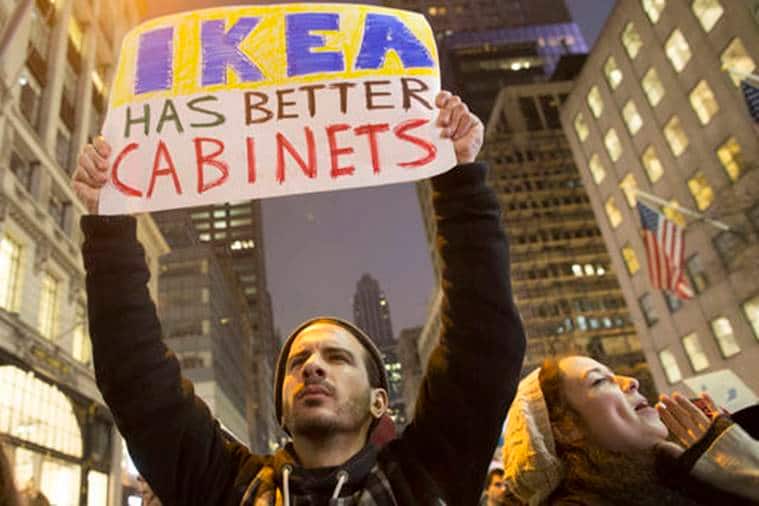 Demonstrators march up Fifth Avenue during a women’s march, Saturday, Jan. 21, 2017, in New York. The march is being held in solidarity with similar events taking place in Washington and around the nation. (AP Photo/Mary Altaffer)

The lawmakers who Trump will rely on to achieve his policy goals including building a wall on the Mexican border and replacing the 2010 healthcare reform law known as “Obamacare” may be more susceptible to the negative public opinion the march illustrates, Levesque said.

“Members of Congress are very sensitive to the public mood and many of them are down here this week to see him,” Levesque said. At the New York march, 42-year-old Megan Schulz, who works in communications said she worried that Trump was changing the standards of public discourse.

“The scary thing about Donald Trump is that now all the Republicans are acquiescing to him and things are starting to become normalized,” Schulz said. “We can’t have our president talking about women the way he does.”