Severe weather was a concern along the east coast, with the weather service issuing warnings in New Jersey as well. Tornadoes touched down in Pennsylvania and Wisconsin amid powerful thunderstorms that caused widespread damage that contributed to the death of a man who crashed into a fallen tree and power line, officials said Thursday.

The Courier Times of Bucks County reported one of the tornadoes in Pennsylvania damaged an auto dealership and a mobile home park. 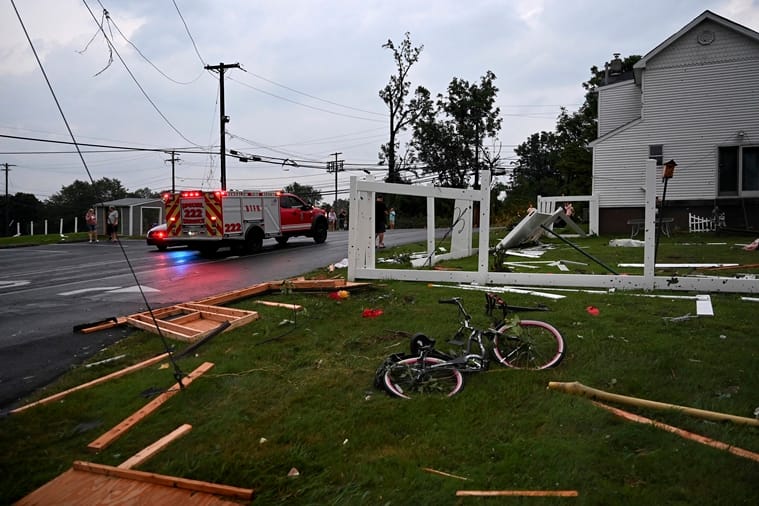 Debris is scattered in the Penn Valley Terrace trailer park after a tornado hit in Trevose, Pa. Thursday, July 29, 2021. (AP)

Bensalem Police Public Safety Director Fred Harran said four people were injured at the auto dealership in Bensalem, and a fifth person was hurt at a nearby business. All injuries were considered non-life-threatening. Anthony Perez, an employee at the dealership, said a weather alert sounded on his phone just before the tornado hit.

“At that point, we were looking for shelter,” he said. “Everything was in a flash.”

Severe weather was a concern along the east coast, with the weather service issuing warnings in New Jersey as well.

In Wisconsin, the strong winds that moved across the state from the Mississippi River to Lake Michigan began Wednesday evening. By 2 a.m. Thursday, the numerous tornado warnings around the state had expired.

Hours later, one man died when he crashed his vehicle into a fallen tree and power line near the town of Ripon at about 6 a.m. Thursday, the Wisconsin State Journal reported.

The National Weather Service surveyed hard-hit areas in southeastern Wisconsin and confirmed one tornado, probably rated EF1, caused damage around the Jefferson County community of Concord, toppling farm buildings. Cows could be seen grazing among debris that landed in farm fields. By Thursday afternoon, the weather service confirmed at least two other tornados were also responsible for damage near Waukesha and Watertown.

Gov. Tony Evers signed a declaration imposing a state of emergency in Wisconsin. Evers’ order directs state agencies to help those impacted by the storms. It also allows the National Guard to be activated to support local authorities with recovery efforts.

The weather service on Wednesday warned that the severe weather sweeping across upper Midwest states could include hurricane force winds and tornadoes and develop into a derecho — a rare type of storm that’s often described as an inland hurricane.

Andy Boxell, a meteorologist for the National Weather Service in Sullivan, said a derecho did not materialize. “That’s not what we had last night,” he told the Milwaukee Journal Sentinel.

Utility crews worked to restore service to thousands of power customers. Electricity was knocked out to about 90,000 customers across Wisconsin, according to the tracking website poweroutage.us.

How to ensure your child’s mental well-being during Covid