The entire episode — her being confronted with the video of the assault, her horrified response to it and her exchange with a staff member, who tells her to “relax” — all happened with the cameras rolling. The crew recorded the scene as if it were another part of the action. 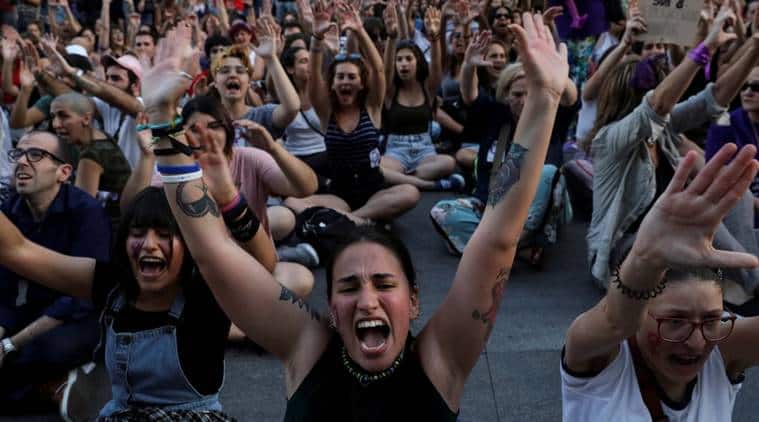 A demonstration against the release on bail of five men cleared of a gang rape of a teenager and convicted of a lesser crime of sexual abuse in Madrid last year. (Source: Susana Vera/Reuters)

A contestant on a Spanish reality television show says she was sexually assaulted by another contestant while she was unconscious — an attack that was recorded. The show’s producers then forced her to watch and filmed her reaction.

Two years later, it has all burst into the open, with the recent leak of a video in which the woman, then 24, can be seen sobbing after the show’s staff made her watch images of her own assault.

The video of her pained reaction has spread widely on social media, prompting a national backlash against the show, “Gran Hermano” — the Spanish version of “Big Brother” — and against what campaigners against sex crimes and harassment say is a culture that still does not take the problems seriously enough.

The leaked video, shown in Spanish media and posted online, shows the woman watching the recording, then weeping, pacing and burying her face in her hands. She begs to go talk to “her friends out there,” but an offscreen member of the show’s staff tells her that she cannot see her friends and should not tell anyone what happened.

The entire episode — her being confronted with the video of the assault, her horrified response to it and her exchange with a staff member, who tells her to “relax” — all happened with the cameras rolling. The crew recorded the scene as if it were another part of the action, one of the interviews they conduct with contestants after key moments on the show.

The leak coincided with news that an investigating judge had decided to pursue a criminal case, though so far no one has been indicted.

Video of the alleged assault itself has not been seen publicly. But the unseen staff member in the leaked video said the male contestant, who had struck up a romantic relationship with the woman after meeting her on the show, offered her support, even as the camera tracked her pacing and crying.

The production company reported the man to police hours later, and expelled him from the show. The broadcaster released a statement explaining that he had been ousted for “intolerable” behavior but gave no details.

The production staff has been broadly condemned for the failure to intervene and for treating the young woman in a way that she and critics of the show say traumatised her.

Last week, Zeppelin TV, the company that produces “Big Brother” in Spain, issued an apology to the woman and said it would put in place rules to avoid anything similar happening, notably by banning alcohol from the set. But the statement did not dampen public outrage, which has driven dozens of corporate sponsors to drop the show.

“They allowed him to stay by my side many hours when they had sufficient proof to get him out immediately and then decide what to do with him,” the young woman, Carlota Prado, said in an interview with El Confidencial, the publication that first obtained the leaked video.

The production staff allowed the man, José María López, who was also 24 at the time, “to laugh at my face by telling me that he looked after me,” she said.

In the interview, she said she had resisted López’s advances in the presence of other contestants and again in a bedroom before losing consciousness.

“I cannot understand how the program allowed this,” she said.

Before showing her the video of assault, she said, the production team gave no hint of what she was about to see, magnifying the shock. Given a choice, she said, she would not have viewed it.

A representative of López could not be reached for comment.

Gregorio Gómez Mata, director of Alma, a group that fights gender-based violence, argued that anybody who was involved in the episode, down to each individual cameraman, should appear in court for failing to assist a person in danger.

“You cannot watch a crime and do nothing about it,” he said. “Sadly, ‘Big Brother’ maintains high levels of audience, which tells us a lot about our society.”

There have been mass street protests in Spain against some recent court rulings in sexual assault cases. Women’s groups have accused Spanish judges of paternalism and bias for demanding that victims demonstrate that they had fought back against their attackers.

Last month, prosecutors announced that they would appeal a recent verdict in which five men were convicted of the sexual abuse of an unconscious 14-year-old girl in the town of Manresa, but not the more serious crime of rape, because the court ruled that they had not used violence.

“Big Brother” throws strangers together in a confined space and records all of their interactions, hoping that the forced intimacy will create sparks, positive or negative.

On the night of the incident, Prado had been drinking heavily at a party with other contestants, but apparently not López. In a video clip from the show, a man can be seen pulling at the waistband of her pants, stroking her hair and gripping her wrists, while she repeatedly seems to fend him off, before they walk off together.

The next day, Prado, who said she had no memory of an assault, was made to watch the video of her alone with López. The viewing took place in the show’s “diary room,” where a contestant is interviewed on camera by someone who is not in the shot.

A sobbing Prado was guaranteed by the off-camera person that nobody from the public would see the same images. She asked to confront López but was told that she would not be able to speak with him again.

The unseen person told her that the makers of “Big Brother” condemned what had taken place and would give her full psychological support, while offering her the possibility to leave the show “without any kind of penalty.” Prado requested medication to help her calm down, and said her heart was racing, but instead she was asked to sit on a sofa and “relax.”

When she asked to speak to some of her friends outside the house, the person insisted that she had to wait, and that “this matter, for the sake of José María and you, for the sake of both, should not get out of here.”

She paced the room, angry and crying: “What do I have to wait for? I won’t say anything, I understood what you have said.”

Finally, a woman who identified herself as a member of the show’s casting department walked into the room and hugged Prado, who continued to sob.

The producers took her to a hotel for a few days, after which she decided to rejoin the show.

Mediaset, the company that broadcasts “Big Brother” in Spain, issued a statement recently accusing its main rival media group in Spain of using the case of Prado to fuel a “denigratory campaign” against the show.

When the season that featured Prado ended, in December 2017, the show switched to featuring only celebrity contestants rather than ordinary people. Zeppelin did not say whether the change was prompted by what had happened to. Prado.

“What seems to have failed completely is putting themselves in the place of the victim,” said Lorente, the former government official.

He said that the case showed that “Spain has put in place the laws, but we still live in a far too permissive society.”