The death of 68 people in rioting and fire at a police station in Venezuela's Valencia puts a spotlight on the South American country torn by a debilitating economic crisis, international sanctions and an authoritarian regime. Here's an explainer chronicling the challenges in the country 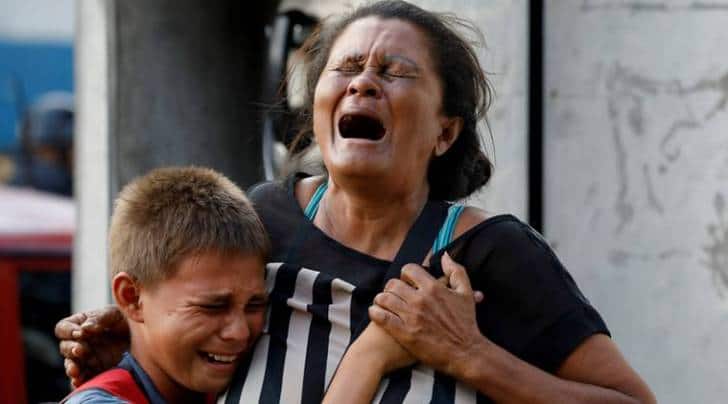 Relatives of inmates held at the General Command of the Carabobo Police react as they wait outside the prison, where a fire occurred in the cells area. (Reuters)

The deaths of at least 68 people in the fire and rioting at Venezuela’s Carabobo police station in Valencia on Wednesday once again calls for the attention of international community towards this South American country. After initial reports of fire, families thronged to the venue to get some information on their incarcerated relatives. The failure to obtain any information sparked outrage among protesters and they clashed with police officials on the spot — only to be subjected to tear gas later.

The country’s top prosecutor later resorted to a social media post to announce that scores of people had died in the incident. “In light of the terrible events that took place in the Carabobo state police headquarters, where 68 people died in a presumed fire, we have appointed four prosecutors… to clarify these dramatic events,” Tarek William Saab tweeted.

Though at present there is very little clarity on the cause of the blaze, BBC reported that the fire was caused after some detainees set fire to the mattresses in a bid to escape. An investigation has been launched into the incident to ascertain the cause of the fire. 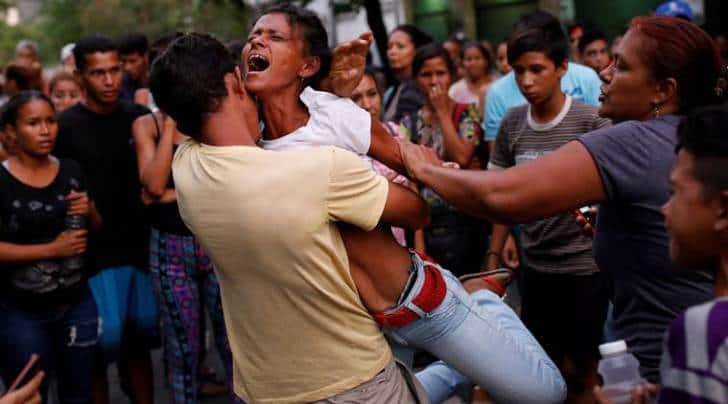 Relatives of inmates held at the General Command of the Carabobo Police. According to reports, police used tear gas to disperse the protesters. (Reuters)

Venezuela was thrown into a prolonged period of civil and political unrest when on March 29, 2017, the pro-President Supreme Tribunal of Justice (TSJ) dissolved the National Assembly and officially took over its legislative powers. The move sparked widespread protests by the Opposition which termed it as a coup stating that this would turn Venezuela into a one-man dictatorship.

Even though the decision was reversed on April 1, the protests did not stop leading to nearly 40 deaths. President Nicolas Maduro’s government treated the protesters with rubber bullets, tear gas, and firings at point blank range. 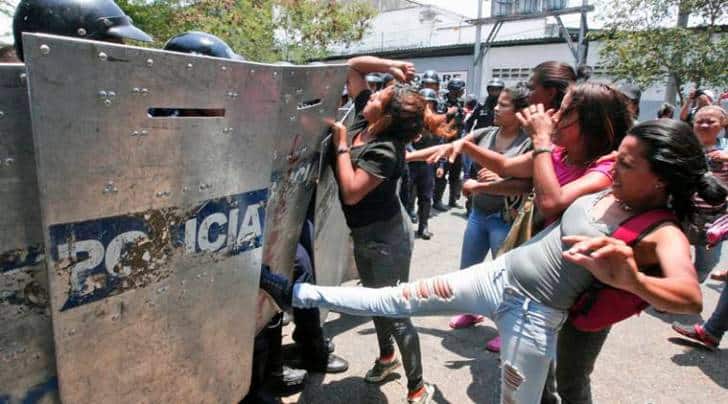 A woman kicks at a riot police shield as relatives of prisoners wait to hear news about their family members imprisoned at a police station where a riot broke out, in Valencia, Venezuela on Wednesday. (AP Photo)

However, discontentment had been brewing for a long time in Venezuela and the TSJ ruling served just as the boiling point. An oil-rich Venezuela entered into a recession in 2014 following the oil crisis that year since oil accounts for about 95 per cent of Venezuela’s export revenues. Since the money used to finance some of the government’s social programmes came from these revenues, the populist programmes took a hit denting Maduro’s popularity further.

Challenging economic conditions led to a myriad of other problems including rising crimes, a steep decline in quality healthcare and migration. The extent of Venezuela’s debilitating economic crisis can be gauged from the fact that unofficially $1 was equal 103,000 bolivars from about 3,000 at the start of 2017. The consequences of this are visible in day to day Venezuelan life where citizens have to rely on black markets to secure they everyday necessities. Maduro’s authoritarian government makes things worse by launching frequent crackdowns against dissenters.

In Venezuela, latest official inflation figures too are not available. The central bank reported the 2016 inflation rate was 274.4 per cent. According to the opposition-controlled National Assembly, inflation in the first quarter of the year will be above 231 percent, the Xinhua reported. 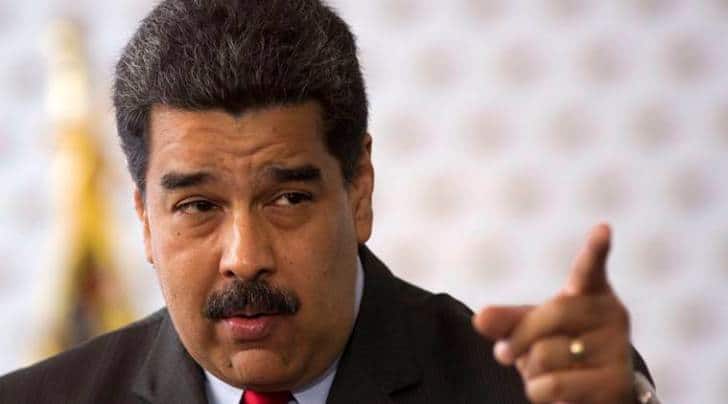 Shortage of food and supplies, mounting hunger and hyperinflation have also forced Venezuelans abroad in what is being termed as one of the largest exoduses in Latin America’s history. Independent groups estimate as many as 3 million to 4 million Venezuelans have abandoned their home country in recent years, with several hundred thousand fleeing in 2017 alone. 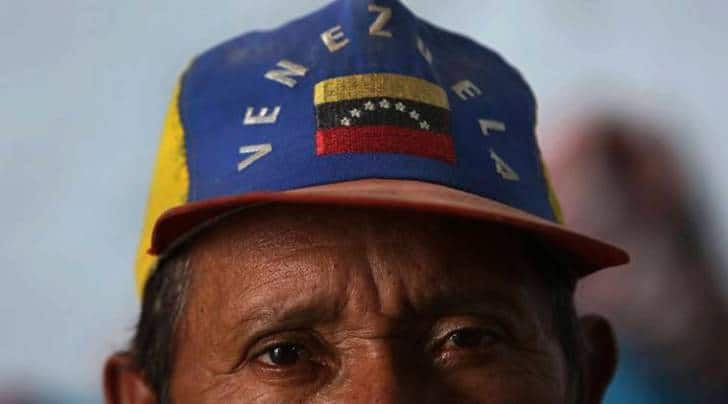 Cesar Mariano, 58, from Venezuela, wears a cap featuring the national flag of his native country, at a shelter in Pacaraima, the main entry point for Venezuelans in the Brazilian northern state Roraima. Many arriving here say attempts to find work are always met with a firm “no.” (AP Photo)

25-year-old Daniel Klie is one such person. After being helped by a Venezuelan-turned-US techie, Guido Nunez-Mujica, Kie migrated to Chile looking for better prospects. His first two months, however, were tormenting. A college graduate with two degrees, in journalism and library sciences, he worked under the table at a butcher shop, toiling long hours seven days a week for less than the minimum wage. “In Venezuela, trying to save money is a titanic undertaking,” said Klie. “It’s all about trying to eat and survive each day. Planning ahead is impossible.”

Earlier this week, President Nicolas Maduro also announced the denomination of the national currency by knocking off three zeroes from the bolivar. The move is a part of the effort to stop the country from spiralling further downwards. 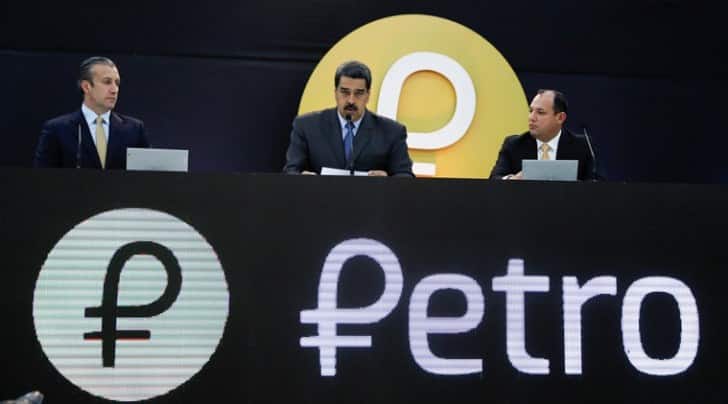 In February, Maduro unveiled the cryptocurrency petro in a desperate bid to dodge strict US sanctions. On February 20, the President said oil-backed petro cryptocurrency raised $735 million in the first day of a pre-sale. However, the biggest roadblock in this route is the trust factor. The international community is wary of the debt-ridden country and investments — if any — might be too far and few in between.

In case you didn’t know, cryptocurrency is a kind of virtual money that keeps transactions secure from outside parties — like foreign governments looking to impose sanctions using cryptography.

On March 19, President Donald Trump also signed an executive order barring any US-based financial transactions involving petro — the latest offering by Venezuela’s socialist government. US officials warned that the cryptocurrency was a “scam” by President Nicolas Maduro’s government to further undermine democracy in the OPEC country.

As Venezuela faces tough times diplomatically in the face of the incumbent US administration, Arreaza said India is a “sovereign country” and its relationship with the US will not impact ties with Venezuela.

“President Maduro loves India… he is a Sathya Sai Baba follower. He is a Christian, but he follows Sai Baba… we learnt about the values of tolerance, non-discrimination here in India,” Arreaza told The Indian Express earlier this month. 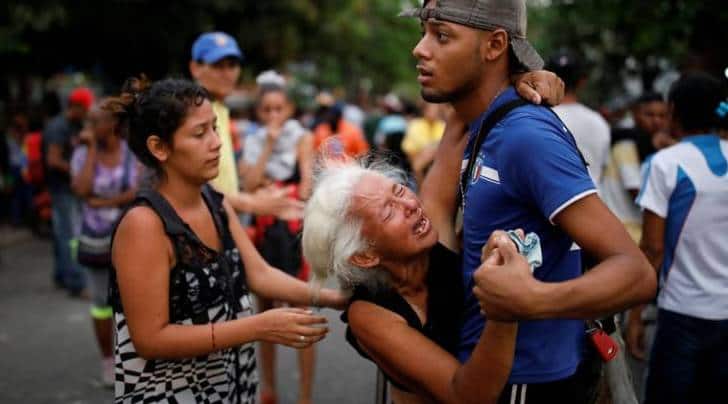 Venezuelans are unlikely to forget Wednesday’s incident which also throws light on the overcrowded prisons in the country. (Reuters)

Mired in international sanctions, economic crisis and a struggle for survival, Wednesday’s prison mishap might just stoke disgruntled citizens further. This cannot be good news for Maduro who would be seeking a re-election in the upcoming May 20 presidential vote.

Prisoners often openly wield machine guns and grenades, use drugs and leave guards powerless. “There are people who are inside those dungeons (…) and the authorities do not know they exist because they do not dare to enter,” said Humberto Prado, a local prisons rights activist.

An NGO monitoring prison conditions in Venezuela — Window to Freedom — said officials should be held accountable for failing to address deteriorating state of police station jails. The group’s director, Carlos Nieto Palma, said overcrowding has become common throughout the country as detainees are kept long past customary brief holding periods before being sent to other larger jails before trial or freed.

Who is Chanda Kochhar?