The attack Saturday at the home of a rabbi, coming after a slew of recent anti-Semitic incidents, has rattled the region’s Jewish population. The authorities have boosted police patrols in ultra-Orthodox neighborhoods and bolstered security at area synagogues and yeshivas. 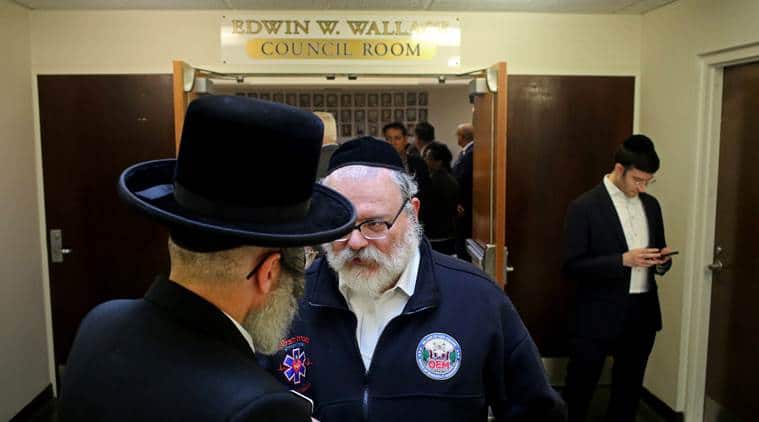 In his journal, prosecutors said, he referred to Hitler and “Nazi culture.” On his phone, he searched online at least four times for “why did Hitler hate the Jews” and looked for “prominent companies founded by Jews in America.”

Those details emerged as federal prosecutors filed hate crime charges Monday against the man accused of stabbing five Jewish people at a Hanukkah celebration over the weekend in the New York suburbs.

In recent weeks, the criminal complaint said, the man, Grafton E. Thomas, searched for “German Jewish Temples near me,” and “Zionist Temples” in Elizabeth, New Jersey, and in Staten Island.

It said Thomas had made online queries suggesting anti-Semitic views as early as Nov. 9. School buses are parked on Heyward Street, in front of the Mosdos Chasidei Square school in the Williamsburg area of Brooklyn on Monday, Dec. 30, 2019. The New York Police Department has increased patrols in three Brooklyn neighborhoods after a series of anti-Semitic incidents. (Karsten Moran/The New York Times)

The attack Saturday at the home of a rabbi, coming after a slew of recent anti-Semitic incidents, has rattled the region’s Jewish population. The authorities have boosted police patrols in ultra-Orthodox neighborhoods and bolstered security at area synagogues and yeshivas.

Anxiety in these neighborhoods has mounted all year as anti-Semitic hate crimes around the country have risen. In its most recent audit, in 2018, the Anti-Defamation League recorded the third-highest total of anti-Semitic incidents since the group started publishing the information 40 years ago.

In an interview Monday morning on NPR, the public radio network, Mayor Bill de Blasio said of the recent attacks: “We consider this a crisis. Really, there is a growing anti-Semitism problem in this whole country. It has taken a more and more violent form.”

As of Sunday, New York City had seen a 23% rise in anti-Semitic hate crimes this year, according to police data. Even as Thomas appeared in federal court Monday afternoon, the tension was evident in long-established Orthodox enclaves in Brooklyn, as well as further-flung ones like Monsey, New York, where Saturday’s stabbing took place. Residents went about their daily routines and religious rituals against the backdrop of cruising police cars and flashing police lights.

“We are without answers,” said Rabbi David Niederman, the president and executive director of the United Jewish Organizations, a social services organization based in Brooklyn.

After subsequent anti-Semitic incidents, including the stabbings in Monsey, the department has also stepped up patrols in some Brooklyn neighborhoods.

In Rockland County, where the attack Saturday took place, the county executive, Ed Day, announced Monday that a private security firm would work with the police to provide armed guards to synagogues in Monsey.

“We cannot stand around and do nothing,” Day said. “We are taking proactive action in order to address the concerns, the fears that are out there.”

Rockland County has more than 300,000 people, and 31% of the population is Jewish, according to the state. It is believed to have one of the largest populations of ultra-Orthodox Jews outside of Israel.

“People are afraid to send their kids out to school,” said Benny Polatseck, 30, an Orthodox Jewish community activist who lives in Monsey. “There is real angst.”

New York Gov. Andrew M. Cuomo said Sunday that he had ordered the State Police’s hate crimes task force to investigate the rampage. He also called the attack an “act of domestic terrorism,” the phrase that officials eventually used to describe the Jersey City shooting.

The ultra-Orthodox communities in New Jersey and Rockland County have grown as Hasidic families from New York City, priced out of their neighborhoods, have relocated there. Despite the distance, residents in both places retain close ties with one another.

“It hit us very hard,” Yehuda Weill, who manages a bakery in Brooklyn’s Williamsburg neighborhood, said of Saturday’s attack. “But look, we have to go on with life.”

The five victims of the attack at the home of the rabbi, Chaim Rottenberg, were taken to the hospital. Several were treated there and released. At least one victim remained in the hospital Monday with a skull fracture, officials said.

Thomas, who was said to be 37 or 38, was later arrested in Harlem, about 30 miles from Monsey, with blood on his clothes, officials said. According to the complaint, officers found both a bloody machete and a bloody knife in his car.

On Sunday, Thomas pleaded not guilty to five counts of state charges of attempted murder and one count of first-degree burglary. In the federal case, Thomas was charged with five counts of obstructing the free exercise of religion in an attempt to kill, prosecutors said.

Geoffrey S. Berman, the U.S. attorney for the Southern District of New York, said in a statement that Thomas had “targeted his victims in the midst of a religious ceremony, transforming a joyous Hanukkah celebration into a scene of carnage and pain.”

If convicted on any of the counts, Thomas faces a maximum sentence of life in prison, federal prosecutors said. Under the law, if any of the victims die as a result of his injuries, Thomas could face the death penalty.

On Monday, Thomas was detained without bail pending further hearings. The federal case is expected to take place before any state case, prosecutors said.

Thomas’ family has said that he has long suffered from mental illness.

One of his lawyers, Michael H. Sussman, told reporters at a news conference Monday that he had asked the Rockland County district attorney to agree to have Thomas undergo a 30-day evaluation in a hospital.

Sussman said that earlier in the day, Thomas told him that a voice, or voices, in his head had commanded him to go to the site of the stabbing and retrieve or destroy a piece of property.

“My impression is that the situation he found where he went in was not the situation he expected to find, and that may have been a trigger for him,” Sussman said at his office in Goshen, New York, flanked by Thomas’ mother, Kim Thomas, who is a nurse, and the family’s pastor, the Rev. Wendy Paige.

Sussman said Thomas suffered from psychosis and major depressive disorder, and had been prescribed several drugs.

Thomas had never spoken to either his mother or pastor about Jews or anti-Semitism, the lawyer and Paige said.

But prosecutors said in the federal complaint that investigators had found handwritten journals at Thomas’ home in which he expressed anti-Semitic views.

On one page, he questioned why people “mourned for anti-Semitism when there is Semitic genocide,” the complaint said.

In another piece of writing, Thomas, who is from Greenwood Lake, New York, used a phrase that investigators said appeared to reference the Black Hebrew Israelite movement, a fringe religious movement.

While the movement is not known for promoting violence, some of its offshoots have been described as hate groups by the Southern Poverty Law Center and the Anti-Defamation League, which track extremist organizations.

Officials have not linked the stabbings and the Jersey City shooting, and they have not established whether Thomas was a follower of the Black Hebrew Israelite movement.

On Monday, Rivkie Feiner, a member of the Orthodox community in Rockland County, said she was happy that the newspaper had not arrived at her home this morning. She did not want her children and grandchildren to read about the stabbings.

“It was hard for my child to fall asleep on Saturday,” she said. “It’s sad that it has come to this, but we need to secure our houses of worship and our schools because times are changing.”