US Elections: All eyes on this prize: Red & Blue collide in purple Pennsylvania

Six straight Democratic presidential wins in the state have kept it more Democratic-leaning than the national popular vote since the 1950s. 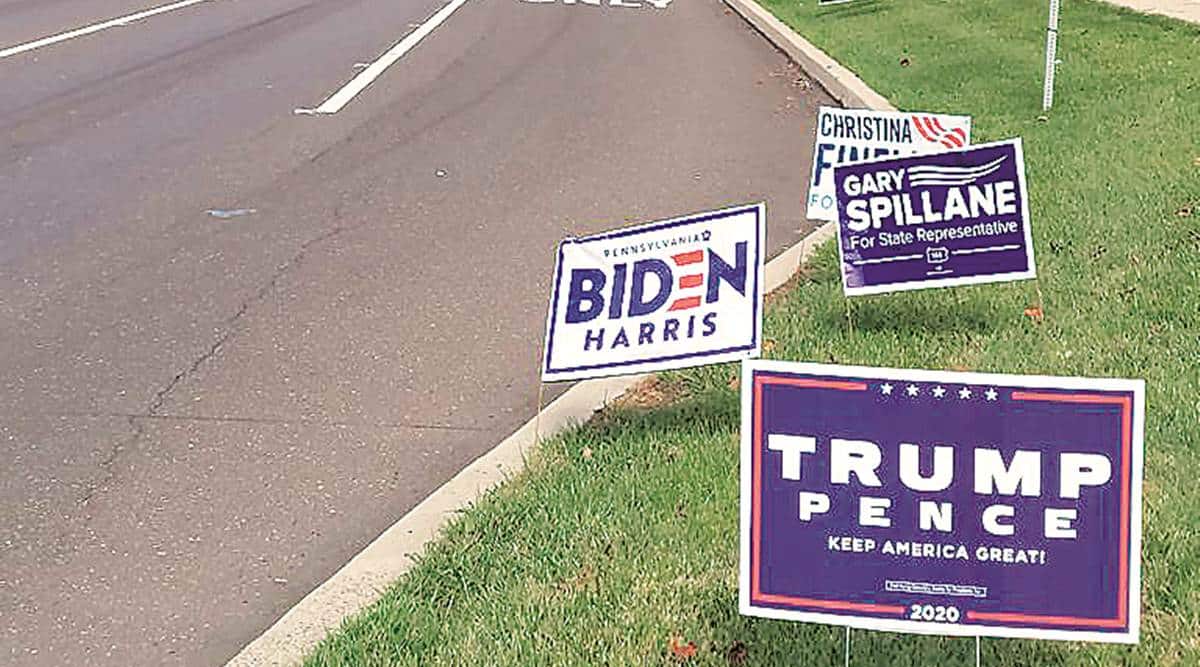 Both signs jostle for attention in a Pennsylvania suburb. (Express photo by Karishma Mehrotra)

America’s two worlds, Red and Blue, collide in purple Pennsylvania’s geography and demography. Republicans focus on the rural middle, straddled by Democratic footholds in the eastern and western cities. And the road to the White House for both sides has to pass through here.

Sure, Democratic nominee Joe Biden is ahead, his chances to the White House — roughly 75 per cent — match his margins of winning this most pivotal state. But this is also where almost all of the limited electoral maps in President Donald Trump’s favour require him to win. And he’s throwing everything into the Pennsylvania ring.

“The President knows his road to the White House is through Pennsylvania,” said Christopher Nicholas, a veteran Republican political strategist. “They are both focusing on the places here where they are strong.”

Six straight Democratic presidential wins in the state have kept it more Democratic-leaning than the national popular vote since the 1950s. Suddenly, in 2016, Pennsylvania became more Republican than the nation. Trump garnered 44,292 more votes than Hillary Clinton, carrying the state with less than a percentage point.

No wonder that the candidates and their families have spent the most time and resources in this state, both sides visiting multiple areas last week alone. This election season, the state has had some of the most important voting rights court battles and registration outreach, as well as now major protests Tuesday after the police killing of a Black man.

Also Read | Voting in US elections: A tale of 3 states

As both urban and rural areas deepen in their political colours, the target is their frontier: the suburbs. “Suburban women, will you please like me?” Trump pleaded at a rally in an eastern Pennsylvania town last week. “Please. I saved your damn neighbourhood, okay?”

“Our goal is to rack up votes in the Philadelphia suburbs,” said Lopa Kolluri, the Pennsylvania co-chair for the campaign’s South Asians for Biden. “The goal is to be focused in the areas where we knew we had an impact.” In the suburbs around the state’s largest city, Philadelphia, Clinton won by smaller margins than former President Barack Obama.

Suburbs are small towns surrounding the country’s major cities. They used to house mostly White Americans, who began deserting cities in the 1950s. Over recent decades, the suburbs have become more diverse, more wealthy, more educated, and more like the cities. But even in that transformation, they voted for Trump by a margin of 5 per cent in 2016, and were especially crucial in battleground states like Pennsylvania.

Said K C Bhaskar, a software engineer who moved from Mumbai to Pennsylvania suburb Chester County two decades ago: “This area is in transition. If you look back two generations, all of this was farmland. Now, a financial services outfit is our biggest supplier.” Jayshree, his wife, added that South Asians used to stay out of politics here “because it’s toxic regardless of which way you look.” Now her organisation They See Blue (a play on the word Desi) and other informal groups like Chittis Brigade are targeting suburban women.

As the highways curve out of Philadelphia and into the suburbs, the road signs for Trump increase in a tight match with Biden’s. In multiple suburban county offices on Tuesday, voters waited to vote early in-person. Most of them had applied for mail-in ballots weeks in advance but hadn’t received them.

In Bucks County, several Democratic Party volunteers helped voters navigate the process, while a lone Trump site overseer observed from across the path silently. Jeff Arnold said he’s voting Republican, but his wife is a Democrat. “I don’t want Biden taking the good peoples’ guns away. She says she’s afraid Trump is going to take away our healthcare. There’s no influencing her,” the 47-year-old said.

Voters repeatedly brought up stories of hiding their affiliation or disagreeing with others. A registered Republican voter said he was voting for Biden this time, but preferred not to share his name. “We had a threat last night. It’s been really cruel,” his wife, a longtime Democrat, said.

“It’s never really been like this before. There’s a lot of hate and violence on both sides. It’s scary,” Arnold said.

In the Asian enclaves of Upper Darby, making up 12 per cent of the population, South Asian store owners were boarding up their front windows with plywood, in response to the recent protests in Philadelphia. Said Arshid Khan, Pakistani owner of a halal meat shop: “Yahan bhi ho sakta hai. Kuch to lagana hai, (It can happen here, need to put something up)” Arshid Khan said. When asked how he’s voting, he said he’s undecided.