The ban targets people from Chad, Iran, Libya, Somalia, Syria and Yemen seeking to enter the United States. Trump, a Republican, has said the travel ban is needed to protect the United States from terrorism. 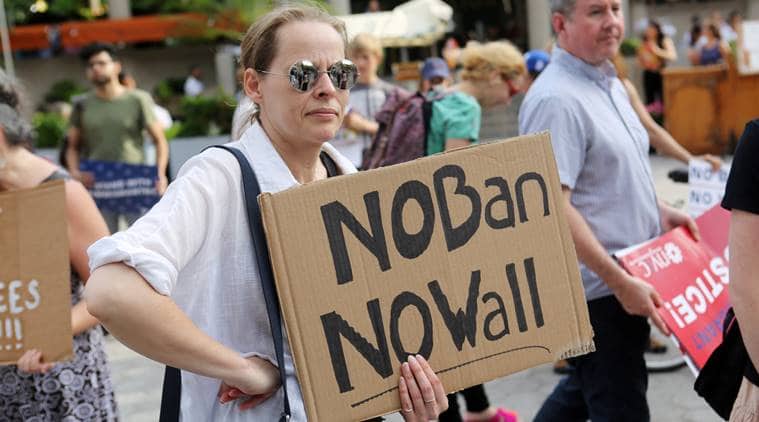 FILE PHOTO – A protester holds a sign reading “No Ban, No Wall” at a protest against US President Donald Trump’s limited travel ban, approved by the US Supreme Court (Reuters photo)

A US appeals court on Friday said President Donald Trump’s hotly contested travel ban targeting people from six Muslim-majority countries should not be applied to people with strong US ties. The 9th US Circuit Court of Appeals, which covers several West Coast states, also said its ruling would be put on hold pending a decision on the latest version of the travel ban from the Trump administration by the US Supreme Court.

Since taking office in January, Trump has been struggling to enact a ban that passes court muster. A three-judge panel from the 9th Circuit narrowed a previous injunction from a lower federal court to those people “with a credible bona fide relationship with the United States.” It also said that while the US president has broad powers to regulate the entry of immigrants into the United States, those powers are not without limits. “We conclude that the President’s issuance of the Proclamation once again exceeds the scope of his delegated authority,” the panel said.

The ban targets people from Chad, Iran, Libya, Somalia, Syria and Yemen seeking to enter the United States. Trump, a Republican, has said the travel ban is needed to protect the United States from terrorism. The state of Hawaii, however, challenged it in court, and a Honolulu federal judge said it exceeded Trump’s powers under immigration law.

Trump’s ban also covers people from North Korea and certain government officials from Venezuela, but the lower courts had already allowed those provisions to go into effect.

The same three-judge 9th Circuit panel, which limited a previous version of Trump’s ban, heard arguments earlier this month. Trump issued his first travel ban targeting several Muslim-majority countries in January, which caused chaos at airports and mass protests. He issued a revised one in March after the first was blocked by federal courts. That expired in September after a court fight and was replaced with the current version.

The ban has some exceptions. Certain people from each targeted country can still apply for a visa for tourism, business or education purposes, and applicants can ask for an individual waiver. “We are pleased that the Supreme Court has already allowed the government to implement the proclamation and keep all Americans safe while this matter is litigated. We continue to believe that the order should be allowed to take effect in its entirety,” U.S. Justice Department spokeswoman Lauren Ehrsam said in a statement.

Suhana Khan is ‘all grown up’ and mom Gauri Khan is in awe too, see photos