The war in Ukraine has thrust all parties involved into an unprecedented dilemma, facing challenges unforeseen in the surrogacy contracts. 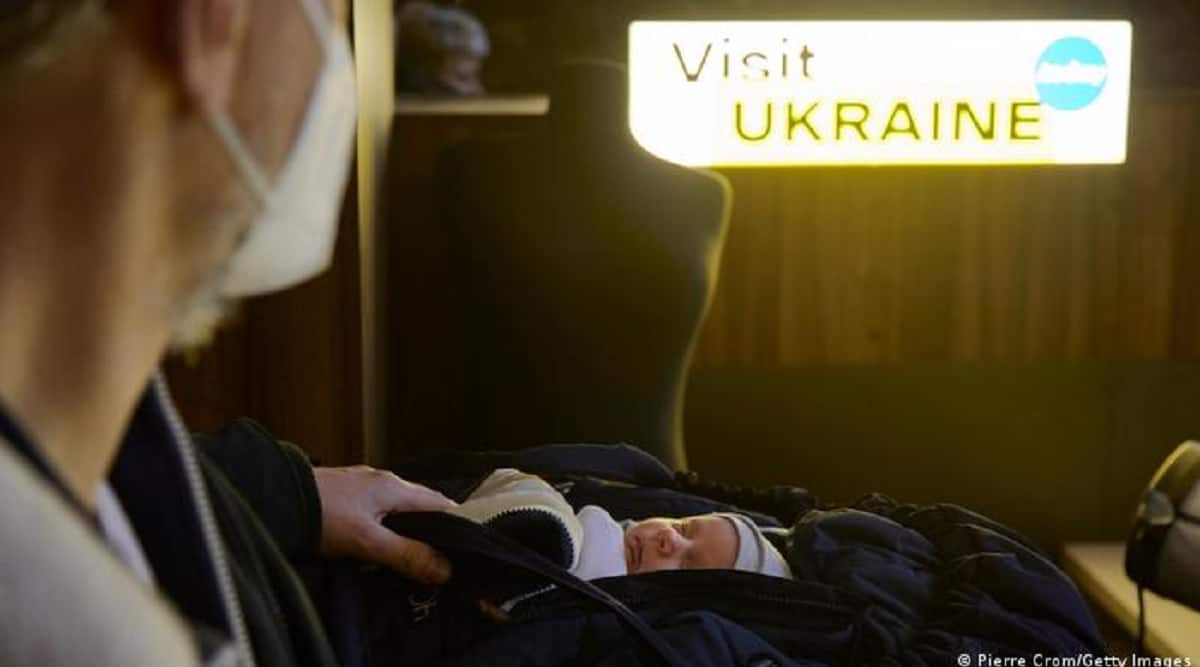 This German man managed to get his baby out of Kyiv. (Source: DW)

Camouflage-patterned sleeping bags, shelves stacked with cans, baby cribs side by side with gas masks. Shortly before the outbreak of the war, Ukraine’s largest surrogacy agency, BioTexCom, published a video on its website — a tour of an air-raid shelter, accompanied by the sound of wailing sirens, where Ukrainian surrogate mothers were supposed to find refuge in the event of war. The message was clear: The pregnant women and the children they carry would be looked after.

Marina (not her real name), however, tells a different story. In early March, she gave birth to a baby in the company’s air-raid shelter. It was cold and dark, and she said there was not enough food, water or medication. For three days, she didn’t hear heard a word from the agency. When BioTexCom employees finally showed up, she said, they picked up the babies — but did not bring food or water.

The war has exposed the ugly face of an industry that was already considered inhumane during peacetime. Commercial surrogacy is legal in Ukraine, where, each year, an estimated 2,000 children are carried to term for foreign parents.

It’s an attractive sector: transferring parenthood to foreign couples is comparatively uncomplicated. Agencies mediate between what are called intended parents and surrogate mothers. All-inclusive packages cost between €30,000 ($33,000) and €40,000. At times, the companies also offer special deals. For instance, on Black Friday last year, BioTexCom offered a 3% discount on surrogacies.

Intended parents, and surrogate mothers — the industry’s terminology is concrete and harsh. It raises hopes and toys with dreams on both sides: would-be parents who have often spent years in the offices of reproductive specialists and adoption agencies, and the Ukrainian women, who earn about €15,000 to €20,000 — that’s several times more than the average annual salary — for renting out their wombs and carrying a child to term.

The war in Ukraine, however, has thrust all parties involved into an unprecedented dilemma, facing challenges unforeseen in the surrogacy contracts. The situation raises several questions: Should the surrogate mother flee to save her life? Or to save the baby she’s carrying in her belly and is not hers? What if the surrogate mother doesn’t want to leave because her own family is still in the country? What if they want to stay to defend their country?

BioTexCom obtains assurances from women who flee that they will be back for the baby’s birth. Since the surrogate mothers are paid in installments, the company has quite some leverage. Meanwhile, the agency is building a bunker in central Ukraine.

Susan Kersch-Kibler, founder of the agency, Delivery Dreams, hastily moved her surrogate mothers abroad but then ordered them to return to Ukraine for the delivery date. Some reports say other agencies have threatened their surrogate mothers by telling them they could face 15 years in prison if they left Ukraine.

Once outside Ukraine, surrogate moms face a different legal situation. In Ukraine, a woman can give birth to a child without being considered the child’s mother. Until now, that meant that after the birth, the surrogate mother agreed to the paternity of the intended father. The child received a passport and could leave the country — to then be adopted by the father’s partner.

However, in many of the countries currently sheltering Ukrainian refugees, a woman automatically becomes the mother of a child by giving birth. It does not matter that the surrogate mothers are not genetically related to the children they had carried. By giving birth in an EU country, they would be considered the mother of the child — a label and role they possibly never wanted.

Marko Oldenburger, who has provided legal advice to German intended parents for 10 years, suspects other reasons why some agencies want to prevent their surrogate mothers from fleeing Ukraine, such as concerns that confidential information might be leaked, the business model might come under closer scrutiny or possible financial losses.

For some surrogate mothers, fleeing is not even an option as they are too far along in their pregnancy. One agency reported that a surrogate mother whose intended parents had insisted on the implantation of two embryos — despite warnings that twin pregnancies are more often associated with health complications. It’s not easy to find a woman who will take that on, and four doctors tried to discourage her, but the woman became pregnant with twins. She has been bedridden for three months, so relocating her is out of the question. The foreign parents, meanwhile, are angry that “their” mother and “their” children are not taken out of the country.

Parents track down ‘their’ mothers

Most of Ukraine’s reproductive clinics are located in the embattled areas around Kharkiv and Kyiv. Many agency employees have fled the war zone and are difficult to reach for foreign parents, who feel abandoned and are desperate.

On social media, many intended parents are looking for their surrogate mothers, and vice versa. As far as the agencies are concerned, the two contracting parties are not supposed to be in touch. It seems many agencies are still doing their best to keep it that way.

Meanwhile, a growing number of babies are waiting in underground infant wards to be picked up by their parents. BioTexCom currently has about 600 pregnant surrogate mothers and at least one child is born every day.

Intended parents who travel to Ukraine to save their babies from the war face closed offices and deserted embassies. They need the newborn to be documented in the birth register and be issued a passport so that they can take the baby out of the country and be recognised as legal parents. But, none of that is possible in the current situation. “So you just have nothing,” says Oldenburger, adding that the parents are left with an undocumented infant.

From Kharkiv to Paris

Sometimes, parents arrange for the surrogate mother to leave Ukraine. Cyril and his partner had no more than a photo of the woman who would carry the French couple’s baby. For ten years, they had yearned for a child. They considered co-parenting and adoption, then finally, a year and a half ago, they turned to a Ukrainian surrogacy agency. In December 2021, their surrogate was pregnant. Two months later, war broke out.

For two long weeks, Cyril did not hear from the agency before he finally received the surrogate mother’s contact details. She asked him to help her flee Kharkiv. Cyril organised and financed her departure. The journey to Paris took a week. Cyril was careful to make sure it would not be too exhausting for her and that the baby would be safe.

Tatiana is now in Paris. She is restless and anxious because her family is still in Ukraine. Cyril has hired a lawyer to ensure that if the child is born on French soil, it will not be Tatiana’s child, but his. This is entirely new legal territory for everyone involved. “We are all kind of groping in the dark here,” Cyril says.

Hima Das on the most challenging thing about being an athlete: ‘To give up on home-cooked food…’