The US picked up intelligence that Russia is looking at Wednesday as a target date, according to a US official familiar with the findings. 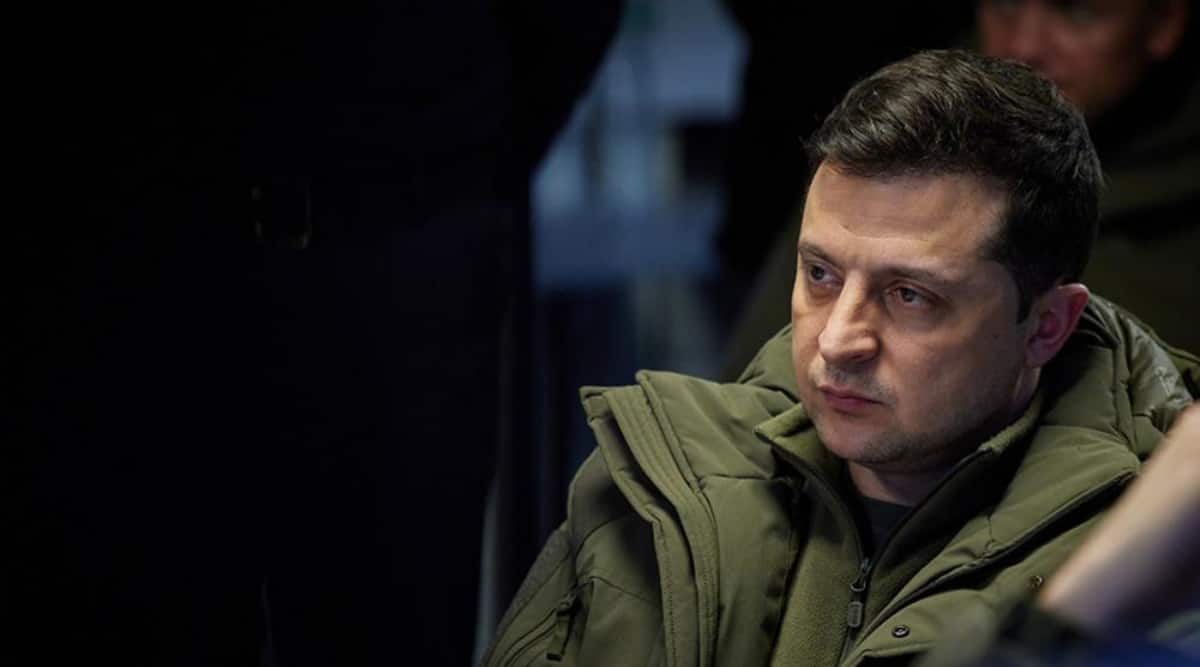 Ukraine’s president played down intensified warnings of a possible Russian invasion within days, saying he had yet to see convincing evidence even as the US warned Sunday of more Russian troops pressing closer to Ukraine’s borders and some airlines canceled or diverted flights there.

The White House said that President Joe Biden would talk later in the day with Ukrainian President Volodymyr Zelenskyy.

Explained |Explained: Can the UN do more than just talk about Russia, Ukraine crisis?

The Ukrainian leader’s repeated statements urging calm among his people – while Russian forces surround Ukraine on three sides, in what Russia insists are military exercises – grew this weekend to Zelenskyy questioning strident warnings from US officials in recent days that Russia could be planning to invade as soon as midweek.

The US picked up intelligence that Russia is looking at Wednesday as a target date, according to a US official familiar with the findings.

The official who was not authorised to speak publicly and did so only on condition of anonymity would not say how definitive the intelligence was.

“We’re not going to give Russia the opportunity to conduct a surprise here to spring something on Ukraine or the world,” Jake Sullivan, the US national security adviser told CNN on Sunday about the US warnings.

An instructor shows a woman how to use a Kalashnikov assault rifle, as members of a Ukrainian far-right group train, in Kyiv, Ukraine, Sunday, Feb 13, 2022. (AP Photo/Efrem Lukatsky)

“We are going to make sure that we are laying out for the world what we see as transparently and plainly as we possibly can,” he said.

The US largely has not made public the evidence it says is underlying its most specific warnings on possible Russian planning or timing.

The Russians have deployed missile air naval and special operations forces, as well as supplies to sustain an invasion.

This week Russia moved six amphibious assault ships into the Black Sea augmenting its capability to land on the coast.

Pentagon spokesman John Kirby said on Sunday that Russia had well over 100,000 troops along Ukraine’s borders and actually over the last few days even more.

Kirby cited a “mosaic of intelligence” the US had gathered, but gave no details.

“We have good sources of intelligence, and they’re telling us that that things are sort of building now to some crescendo opportunity for Mr Putin.”

Zelenskyy’s comments this weekend indicated frustration at the warnings from Washington, as he tries to minimise damage to Ukraine’s economy during the crisis.

“We understand all the risks, we understand that there are risks,” he said in a live broadcast.

“If you or anyone else has additional information regarding a 100 Russian invasion starting on the 16th, please forward that information to us.”

In an hourlong call on Saturday with Russian President Vladimir Putin, Biden said that an invasion of Ukraine would cause “widespread human suffering” and that the West was committed to diplomacy to end the crisis, but “equally prepared for other scenarios,” the White House said.

It offered no suggestion that the call diminished the threat of an imminent war in Europe.

Dutch sensitivity to potential danger in Ukrainian airspace is high following the 2014 shooting down of a Malaysian jetliner, flying from Amsterdam to Kuala Lumpur, as it flew over a part of eastern Ukraine held by Russia-backed rebels.

All 298 people aboard died including 198 Dutch citizens.

The Ukrainian charter airline SkyUp said on Sunday that its flight from Madeira, Portugal, to Kyiv was diverted to the Moldovan capital of Chisinau, after the plane’s Irish lessor said it was banning flights in Ukrainian airspace.

Ukrainian presidential spokesman, Serhii Nykyforov, told The Associated Press that Ukraine has not closed its airspace.

Explained |How large is Russia’s military build-up around Ukraine

But Ukraine’s air traffic safety agency Ukraerorukh issued a statement, declaring the airspace over the Black Sea to be a zone of potential danger and recommended that planes avoid flying over the sea Feb 14-19.

The Putin-Biden conversation following a call between Putin and French President Emmanuel Macron earlier in the day came at a critical moment, for what has become the biggest security crisis between Russia and the West since the Cold War.

US officials believe they have mere days to prevent an invasion and enormous bloodshed in Ukraine.

German Chancellor Olaf Scholz will fly to Kyiv on Monday and Moscow on Tuesday to meet with the presidents in those capitals.

While the US and its NATO allies have no plans to send troops to Ukraine to fight Russia, an invasion and resulting punishing sanctions could reverberate far beyond the former Soviet republic, affecting energy supplies global markets and the power balance in Europe.

In a sign that American officials are preparing for a worst-case scenario, the United States announced plans to evacuate most of its staff from the embassy in Kyiv and urged all American citizens to leave Ukraine immediately.

Also Read |‘With Ukraine, Putin has forced a debate on Russia’s acceptability as a European power’

Britain joined other European nations in telling its citizens to leave.

Biden has bolstered the US military presence in Europe as reassurance to allies on NATO’s eastern flank.

The 3,000 additional soldiers ordered to Poland come on top of 1,700 who are on their way there.

The US Army also is shifting 1,000 soldiers from Germany to Romania, which like Poland shares a border with Ukraine.

Russia is demanding that the West keep former Soviet countries out of NATO.

It also wants NATO to refrain from deploying weapons near its border and to roll back alliance forces from Eastern Europe – demands flatly rejected by the West.

Russia and Ukraine have been locked in a bitter conflict since 2014, when Ukraine’s Kremlin-friendly leader was driven from office by a popular uprising.

Moscow responded by annexing the Crimean Peninsula and then backing a separatist insurgency in eastern Ukraine where fighting has killed over 14,000 people.

A 2015 peace deal brokered by France and Germany helped halt large-scale battles, but regular skirmishes have continued and efforts to reach a political settlement have stalled.

“My family has always been prepared we have all the stuff gathered for like a couple of years now. Honestly I’m not afraid because the war wouldn’t start like in a week,” 21-year-old Yuliia Zaets said at a pro-government rally on Saturday.