British PM Boris Johnson, UK Political Crisis Live: Months of discontent over Johnson’s judgment and ethics within the governing Conservative Party erupted with the resignations of Treasury chief Rishi Sunak and Health Secretary Sajid Javid within minutes of each other on Tuesday evening.

UK political crisis live updates: A day after, British Prime Minister Boris Johnson resigned, former Chancellor of the Exchequer Rishi Sunak on Friday announced that he is standing to be the next prime minister of Britain. “I’m standing to be the next leader of the Conservative Party and your Prime Minister,” he said on Twitter. Sunak had quit his post as the Chancellor on Tuesday and his departure triggered a wave of resignations forcing Johnson to resign.

Apart from Saunik, at least three top leaders have publicly expressed interest in becoming his successor, as per reports. Britain-based BBC reported that Tory MP Tom Tugendhat, Attorney General Suella Braverman and pro-Brexit MP Steve Baker have shown interest in the position. Johnson had said in his resignation speech that he will continue in the post until a replacement is found.

Johnson had been hanging onto power despite the resignation of a string of his top ministers. On Wednesday, speaking in Parliament, the embattled PM said his duty was to go on and that he would resign if he felt it was impossible for his government to move forward. Rejecting calls to resign, he argued that he had a mandate from the voters to remain in office.

The 42-year-old MP and son-in-law of Infosys co-founder Narayana Murthy, Rishi Sunak has long been seen as an heir apparent to Johnson at 10 Downing Street and is believed to have garnered the support of a significant chunk of the Conservative Party to launch his candidacy.

The British Indian minister, who resigned from Johnson's Cabinet earlier this week setting off events in motion that ultimately led to his resignation, becomes the highest-profile Tory member of Parliament yet to throw his hat in the ring for the leadership race.

I’m standing to be the next leader of the Conservative Party and your Prime Minister.

Britain-based BBC reported that Tory MP Tom Tugendhat, Attorney General Suella Braverman and pro-Brexit MP Steve Baker have shown interest in the position. Johnson had said in his resignation speech that he will continue in the post until a replacement is found.

‘Can we get a bank holiday?’: Jokes, memes take over after Boris Johnson says he will quit

After a series of resignations rocked the UK government, Boris Johnson announced he would step down as prime minister. At a press conference in his official residence, the Conservative Party leader said he would serve till a new leader was appointed, sparking a meme fest online as netizens celebrated the moment. 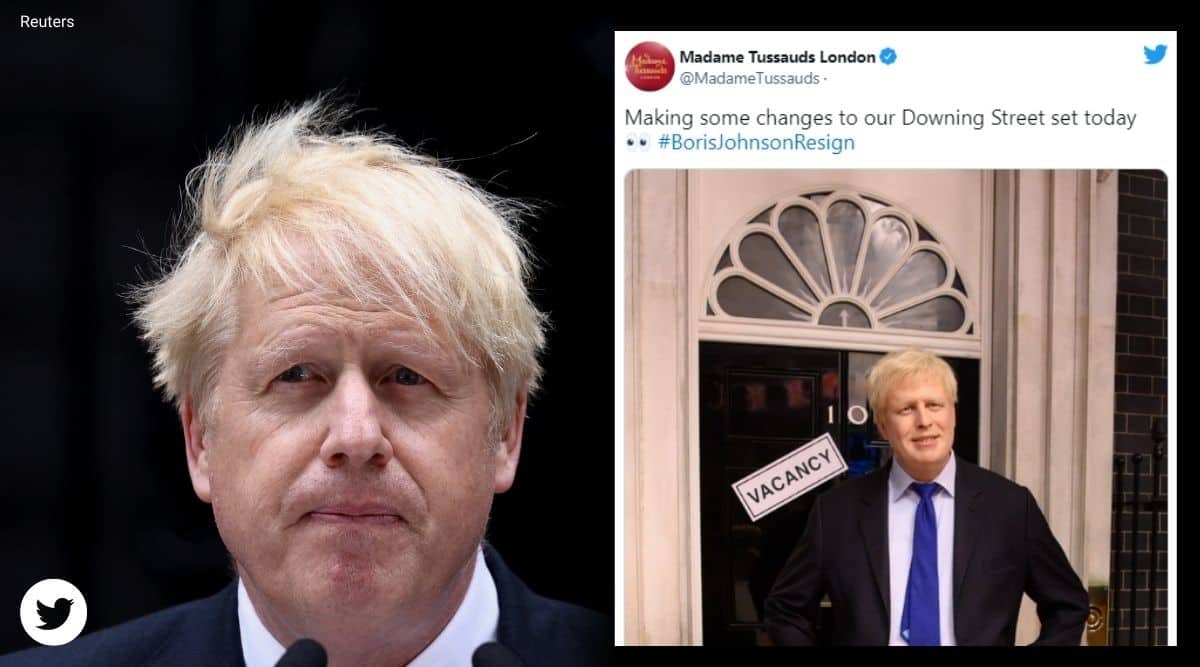 Social media went into a frenzy reacting to the news on Thursday with many poking fun at Johnson and asking if they would get another bank holiday to mark the day. Others shared chaotic scenes from movies and series and tried to sum up perfectly how Johnson failed to hang on despite all efforts. (Read more)

Boris Johnson reached the top but was felled by his flaws

Boris Johnson wanted to be like his hero Winston Churchill: a larger-than-life character who led Britain through a time of crisis. He was felled by crises of his own making, as a trickle of ethics allegations became a flood that engulfed his government and turned his own party against him.

Johnson agreed to resign Thursday after the chorus of disapproval from within his own party became too much for him to withstand. (Read more)

Robert Buckland, Britain's new Secretary of State for Wales, has suggested that the freshly formed cabinet will block Prime Minister Boris Johnson if he tried to make major policy moves in the coming weeks, a Telegraph journalist said on Twitter. Johnson said earlier in the day that he would step down as party leader. (Reuters)

UK's Johnson to Zelenskyy: Will continue to work to end grain blockade

British Prime Minister Boris Johnson, who announced earlier on Thursday he would quit, promised Ukraine's Volodymyr Zelenskiy that he will continue to work with partners to end the grain blockade in the coming weeks, a spokesperson for Johnson said.

"President Zelenskyy thanked the Prime Minister for his decisive action on Ukraine, and said the Ukrainian people were grateful for the UK's efforts," the spokesperson said following a call between the pair.

"The Prime Minister finished the call by praising President Zelenskyy, saying: 'You're a hero, everybody loves you'." (Reuters)

Former UK PM: Boris Johnson must go now, for good of the country

Former British Prime Minister John Major said outgoing leader Boris Johnson should not remain in Downing Street until a successor is found "for the overall wellbeing of the country".

Major, prime minister from 1990 to 1997 and from Johnson's Conservative Party, said deputy PM Dominic Raab could take over until a new leader is found, or the party could change the selection rules to speed up the process.

"The proposal for the prime minister to remain in office - for up to three months - having lost the support of his cabinet, his government and his parliamentary party is unwise, and may be unsustainable," he said in a public letter. (Reuters)

Former British housing minister Michael Gove will not run in an election for leader of the Conservative party, a Daily Mail reporter said on Thursday, after Prime Minister Boris Johnson said he would step down as party leader.

Gove, a senior minister who was sacked by Johnson late on Wednesday, served as secretary of state for "levelling up", housing and communities. (Reuters) British Prime Minister Boris Johnson Thursday announced his decision to resign amid calls by ministers and lawmakers to step down.

Speaking outside No. 10 Downing Street, Johnson said he was “immensely proud of the achievements of this government,” from Brexit to steering the country through the pandemic, and leading the West in standing up to Russia’s invasion of Ukraine. (Reuters photos) 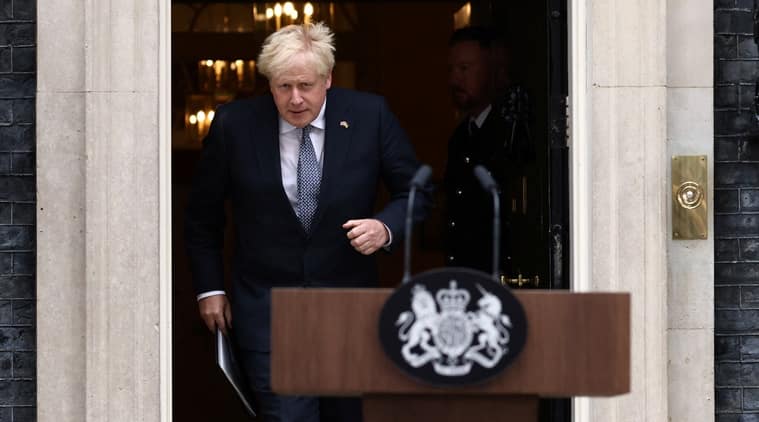 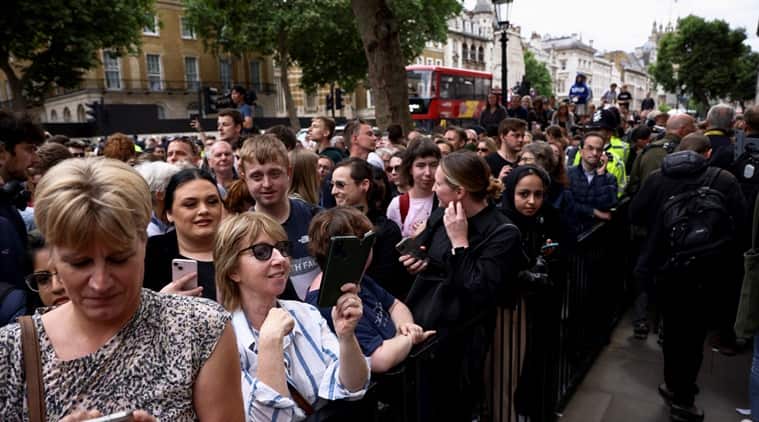 Ireland and Britain now have an opportunity to repair relations that have been strained in recent times by Brexit, Prime Minister Micheal Martin said after the resignation of his British counterpart Boris Johnson on Thursday.

"While Prime Minister Johnson and I engaged actively together, we didn't always agree, and the relationship between our governments has been strained and challenged in recent times," Martin said in a statement.

"We now have an opportunity to return to the true spirit of partnership and mutual respect that is needed to underpin the gains of the Good Friday Agreement," he added, referring to a 1998 Northern Ireland peace deal. (Reuters)

Russian politicians lined up to celebrate the downfall of Boris Johnson on Thursday, casting the British leader as a "stupid clown" who had finally got his just reward for arming Ukraine against Russia.

Johnson, the face of the 2016 Brexit campaign who won a resounding electoral victory in 2019 before leading the United Kingdom out of the European Union, announced he was quitting on Thursday after he was abandoned by ministers and most of his Conservative lawmakers over a series of scandals.

The Kremlin said it didn't like Johnson either. "He doesn't like us, we don't like him either," Kremlin spokesman Dmitry Peskov said shortly before Johnson stood in Downing Street to announce his resignation. (Reuters)

UK's Truss says Johnson was right to resign as PM

British Foreign Secretary Liz Truss said on Thursday that Boris Johnson was right to step down as prime minister. "The PM has made the right decision," she said. "We need calmness and unity now and to keep governing while a new leader is found." (Reuters)

'Sad to be giving up the best job in the world': Johnson

Further in his address, Johnson said: "To public, I know there will be many who are relieved," and added, "I am sad to be giving up the best job in the world."

'Will extend all support to the new PM': Johnson

While stating that he will serve until a new leader is in place, Johnson said he will extend all his support to the new PM who will continue to cut burden on families and businesses.

'No one is indispensable in politics': Johnson

Expressing his regret to not have been successful to stay, Johnson said, 'It is painful not to see my term through.' He further said that 'the herd instinct is powerful and that no one is indispensable in politics.'

Addressing the nation, Boris Johnson said on Thursday he was resigning as Britain's prime minister, bowing to calls from ministerial colleagues and lawmakers in his Conservative Party.

The opposition Labour Party will call a parliamentary no confidence vote in Prime Minister Boris Johnson's government if his Conservative Party don't get rid of him as leader, Labour Party chief Keir Starmer said in a statement on Thursday.

British Prime Minister Boris Johnson should be replaced immediately rather than be allowed to remain as a caretaker leader until his successor is found, several Conservative members of parliament said on Thursday.

Five Conservative member of parliament demanded he resign on Thursday and said another minister should take over during a process that could take weeks because he has lost the authority after more than 50 people quit government.

With UK’s Boris Johnson set to quit, who could replace him?

Boris Johnson was due to resign as Britain’s prime minister on Thursday, bringing an end to a turbulent two and half years in office and triggering a search for a new leader.

Below is a summary of some of those who could be in the frame to replace him. However, there is no clear favourite and they are not listed in order of likely prospects.

Liz Truss: The foreign secretary is the darling of the ruling Conservative Party’s grassroots and has regularly topped polls of party members carried out by the website Conservative Home. Truss has a carefully cultivated public image and was photographed in a tank last year, echoing a famous 1986 photo of Britain’s first female prime minister, Margaret Thatcher. Read more to know the others who could possibly replace Johnson as UK PM.

UK PM Johnson expected to resign on Thursday, to make a statement

British Prime Minister Boris Johnson is expected to resign on Thursday, with his office saying he will make a statement to the country.

Johnson had been hanging onto power despite the resignation of a string of his top ministers. On Thursday the man he appointed as finance minister less than 48 hours earlier publicly urged Johnson to quit.

A defiant British Prime Minister Boris Johnson battled to stay in power on Wednesday after the resignation of two top ministers and a slew of more junior officials, who said they could no longer serve under his scandal-tarred leadership.

Johnson is known for his uncanny ability to wiggle out of tight spots, but a series of accusations of misdeeds have pushed him to the brink, and some of his fellow Conservative lawmakers now worry that the leader renowned for his affability could be a liability in elections.