U.S. District Judge Andrew Hanen sided with a group of states suing to end the Deferred Action for Childhood Arrivals (DACA) program, arguing that it was illegally created by former President Barack Obama in 2012. 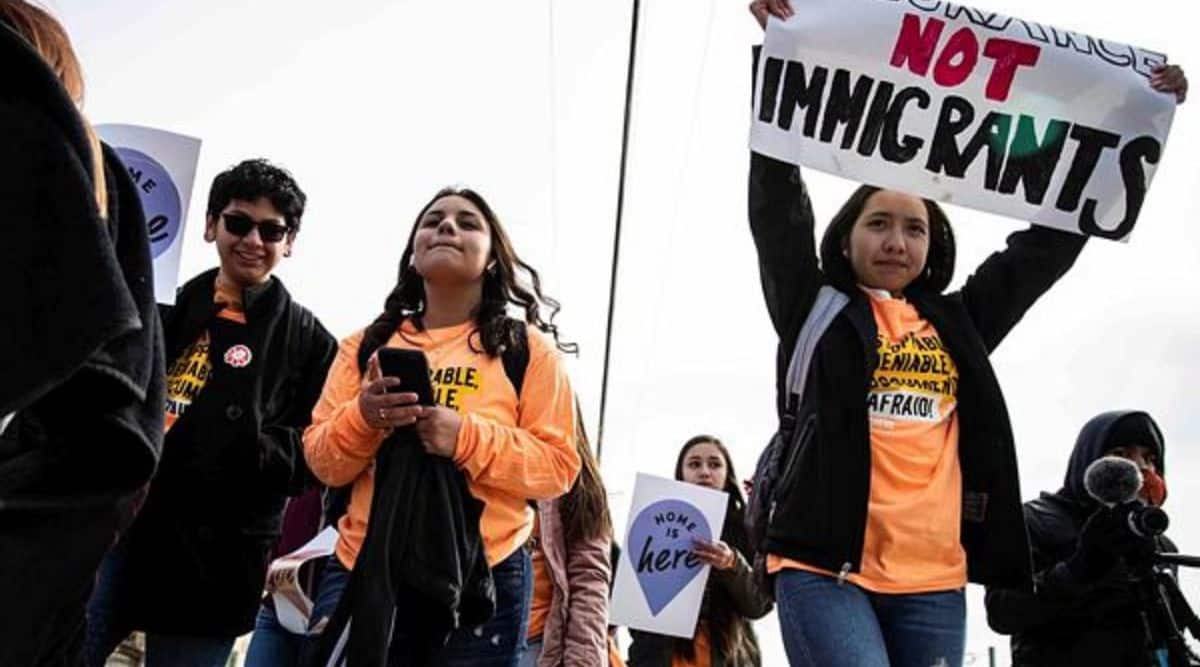 mmigrant youth and advocates rally to the office of Attorney General Ken Paxton on the day of the Supreme Court's hearing on DACA in Austin, Texas. (File Photo)

A U.S. federal judge in Texas on Friday blocked new applications to a program that protects immigrants who were brought to the United States as children from deportation, but said the hundreds of thousands of people already enrolled would not be affected until further court rulings.

U.S. District Judge Andrew Hanen sided with a group of states suing to end the Deferred Action for Childhood Arrivals (DACA) program, arguing that it was illegally created by former President Barack Obama in 2012. Hanen found the program violated the Administrative Procedure Act (APA) when it was created but said that since there were so many people currently enrolled in the program -nearly 650,000 – his ruling would be temporarily stayed for their cases and their renewal applications.

“To be clear,” the judge said, the order does not require the government to take “any immigration, deportation or criminal action against any DACA recipient. “He said the government could continue to receive new applications to the program, as ordered by a federal judge in a separate case, but that it could not approve them.

The White House and Department of Justice did not immediately respond to a request for comment.

Cheska Mae Perez, a 23-year-old DACA recipient from the Philippines, said her 22-year-old brother and 20-year-old sister applied for DACA as soon as new applications were allowed following a court order in December 2020.

Her brother received his approval a couple of weeks ago, she said, but her sister was still waiting.”I spoke with her a few minutes after the decision came down,” Perez said. “She burst into tears. “Democratic U.S. Senator Bob Menendez of New Jersey wrote on Twitter that the ruling was not a surprise, “just a painful reminder that we need to stop relying on temporary immigration fixes.”

“Congress must seize the moment and any and all opportunities to finally provide a pathway to legalization for millions of undocumented immigrants,” he said.

Democratic President Joe Biden, who was vice president when Obama created the program, has said he wants to create a permanent pathway to citizenship for DACA recipients, known as “Dreamers. “Biden issued a memorandum on his first day in office directing the secretary of the Department of Homeland Security to take “all actions he deems appropriate” to “preserve and fortify” the program, which former President Donald Trump, a Republican, tried to end.

The U.S. Supreme Court last year blocked a bid by Trump to end DACA, saying that his administration had done so in an “arbitrary and capricious” manner. U.S. Homeland Security Secretary Alejandro Mayorkas said in March that his department would issue a formal regulation to strengthen the legal standing of the DACA program, but the agency has yet to do so.

Biden’s comprehensive immigration bill, which Democrats introduced in Congress on Feb. 18, also calls for a three-year pathway to citizenship for many DACA recipients, but it lacks Republican support and faces long odds of passage.

The Obama administration issued a memo creating the DACA program after a bipartisan immigration reform bill called the DREAM Act failed to pass Congress. Recipients are protected from deportation, granted work authorization, given access to drivers’ licenses, and in some cases have better access to financial aid for education.

Hanen agreed in his ruling with critics of the program who argued that DACA did an end-run around the legislative process by providing benefits to Dreamers without congressional authorization.

Beneficiaries of the program say that in the near-decade since its creation, DACA has allowed them to develop lives in the United States that would have been impossible without some form of legal status.

At the same time, recipients say the program’s constant tumult in the courts has caused undue stress, with an ever-present looming threat that the benefits of DACA could disappear at any moment. Even though the ruling protects DACA holders for now, the prospect of future court proceedings creates more uncertainty for the group.