The Turkish President also referred to China's minority Muslim Uyghurs in Xinjiang and Myanmar's Rohingya crisis during his address. 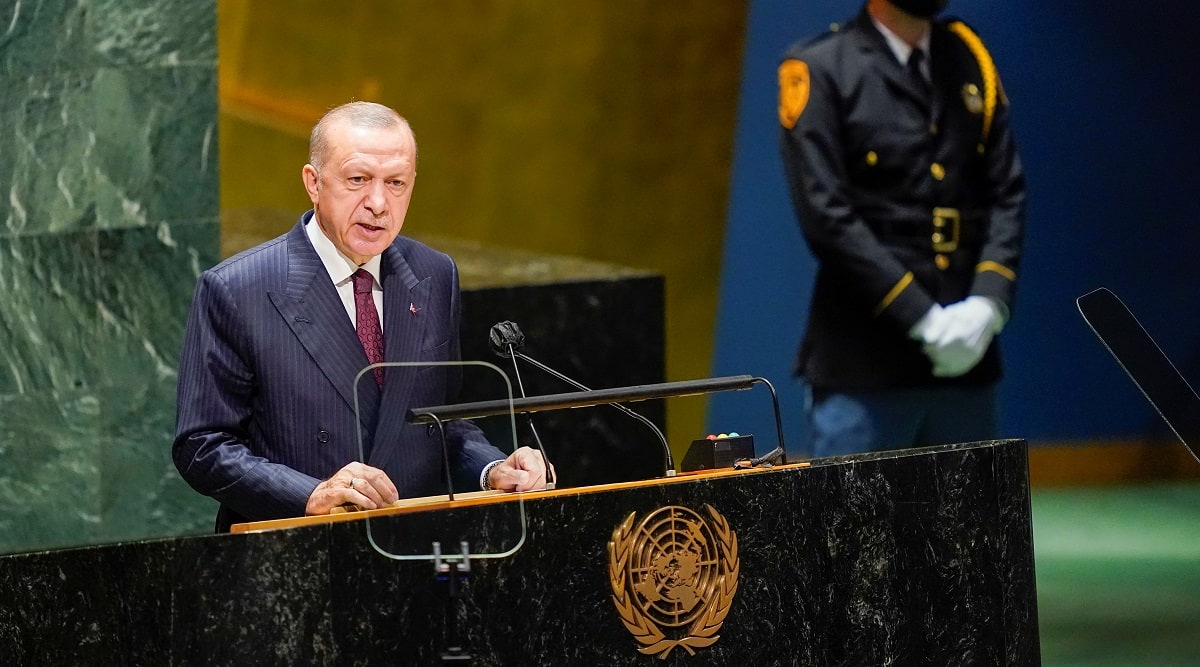 Turkish President Tayyip Erdogan speaks during the 76th Session of the General Assembly at UN Headquarters in New York. (Reuters)

Turkey’s President Recep Tayyip Erdogan has again referred to the issue of Kashmir in his address to world leaders at the high-level UN General Assembly session.

Last year also, Erdogan in his pre-recorded video statement to the General Debate had made a reference to Jammu and Kashmir.

India at that time termed it as “completely unacceptable”, saying Turkey should learn to respect the sovereignty of other nations and reflect on its own policies more deeply.

Erdogan in his address to the General Debate on Tuesday said, “We maintain our stance in favour of solving the ongoing problem in Kashmir for 74 years, through dialogue between the parties and within the framework of relevant United Nations resolutions.”

The Turkish President, a close ally of Pakistan, had repeatedly raised the issue of Kashmir in his address to the high-level General Debate. He had also raised the Kashmir issue during his visit to Pakistan last year.

The Ministry of External Affairs (MEA) at that time has said Erdogan’s remarks reflected neither an understanding of history nor of the conduct of diplomacy and that they will have strong implications on India’s ties with Turkey.

It said India rejected the repeated attempts by Turkey to justify the cross-border terrorism “practised so blatantly” by Pakistan.

In his address on Tuesday, the Turkish President also referred to China’s minority Muslim Uyghurs in Xinjiang and Myanmar’s Rohingya during his address.

Erdogan said that “within China’s territorial integrity perspective, we do believe that more efforts need to be displayed regarding the protection of the basic rights of the Muslim Uyghur Turks”.

The US and the EU besides many other countries have accused China of committing genocide against the Uyghurs in resource-rich Xinjiang and called for an international probe by human rights groups. “We also support ensuring the safe, voluntary, dignified return of Rohingya Muslims, who are living in difficult conditions in camps in Bangladesh and Myanmar, back to their motherland,” Erdogan said.