At least 11 people died this month climbing Everest, more than twice the number who died last year. Most were on the Nepalese side; only two of the deaths occurred on the Chinese side, which has more restrictions. Many had reached the summit and were on their way down. 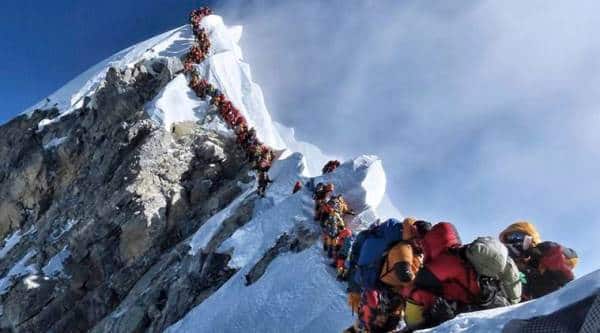 A record number were issued this year. Mountaineers described traffic jams caused by exhausted rookies slowing down a climb where delays can be deadly. (Source: AP)

The pictures were astounding: a single-file line of dozens, if not hundreds, of people, perched on a jagged ridge, tantalizingly close to the summit of Mount Everest.

The masses were a sign of dangerous overcrowding on the mountain, which sits along the Nepal-China border, creating perilous delays in unforgiving conditions. The trekkers, who wear oxygen tanks with a limited supply, face temperatures that drop far below 0 Celsius as they approach the peak, which reaches 29,029 feet above sea level.

Nepal issued 381 permits this year, a record number; a smaller number of adventurers also climb from the Chinese side. This climbing season — April and May — also had a paltry number of good weather days, leading many people to set out at once when the skies cleared and the winds seemed calm.

Nepalese officials said Wednesday that they were considering changing rules about who was allowed up Everest.

At least 11 people died this month climbing Everest, more than twice the number who died last year. Most were on the Nepalese side; only two of the deaths occurred on the Chinese side, which has more restrictions. Many had reached the summit and were on their way down.

The climbers who died came from India, the United States and Europe. One was a Nepali guide. All were described as experienced trekkers. Here is what we know about their deaths.

Lawless, 39, an Irish professor who studied artificial intelligence, is presumed to have died on May 16 after falling up to 1,600 feet from the balcony area of the mountain.

His family held a memorial on May 27 at a church in Bray, about 25 miles south of Dublin, Irish news outlets reported. The priest told mourners that Lawless texted his wife to say he had reached the summit and was headed home.

He was said to be an experienced climber who had reached the summit before. His expedition leader told The Times of London that Lawless was the victim of a “freak accident” after he unclipped himself from his safety ropes.

Thakar, 28, an Indian climber, died on May 17 while in his tent on the mountain’s highest camp site. Thaneswar Gurgai of Seven Summit Treks told The Associated Press that Thakar successfully reached the summit but began experiencing issues during his descent. Thakar’s body was discovered hours later.

Cash, 54, of Utah, had achieved his goal of climbing the highest mountain on each of the seven continents, collectively known as the seven summits, before he collapsed on May 22. Mount Everest was the last mountain on his agenda. Cash, a former software salesman, quit his job in December to take on the final two mountains in his goal. After scaling Everest, he initially fainted at the summit, according to Pioneer Adventures, a company that organizes trips on the mountain. He collapsed again while descending near Hillary Step and could not be revived.

Kulkarni, 54, of India, scaled the peak with her husband, Sharad Kulkarni. An expedition organizer told The Times of India that Anjali Kulkarni died from “energy loss” on her way back to Camp 4. A family friend, Ameet Singh, told the paper that the couple had climbed other mountains together, including Kilimanjaro.

“Their fitness level was good,” Singh said. “Besides, there was no bad weather, no contention on availability of Sherpas. This is a sad turn of events.”

Bagwan, 27, of Solapur, India, suffered acute dehydration and exhaustion on his way down from the summit on May 23, according to the Times of India. It was his second attempt to climb Everest after falling short five years ago. Bagwan recently received a master’s degree in physical education and planned to teach at a local institution, the paper reported.

“We had planned a grand welcome for him, but were left stunned,” his friend Anand Bansode told the paper.

Das, 50, of Odisha, India, scaled Everest twice, but did not survive the second expedition. The New Indian Express reported that she became ill and died on her way down the mountain, around the balcony area on May 23. Odisha TV reported she tried to climb the mountain in 2004 and 2006, and succeeded in 2008. The clothes she wore during her 2008 trek have been put on display at Odisha’s State Museum.

“It is a matter of great pride for every Odia that she had scaled the Mount Everest,” said Jayanti Rath, the museum superintendent.

Landgraf, 64, an Austrian builder, also died on May 23 on his way down from the summit, Kobler & Partner, a mountaineering company based in Switzerland, said in a statement.

Landgraf was an experienced mountain climber who was in good physical shape, Austrian media reported. His trip up Everest had been his final climb of the seven summits.

“He lived for his family, his profession, and his great passion, the mountains,” his family wrote in a death notice published in the newspaper Kleine Zeitung.

The following day, Hynes, 56, an Irishman who lived in London, died in his tent at an elevation of about 23,000 feet, the BBC reported. He had trekked to a higher altitude a day earlier, but decided to turn back, CNN reported. He had previously reached the summit of Everest last year.

He was climbing on the Chinese side of the mountain as part of a group led by a Britain-based climbing company, 360 Expeditions. In a statement, the company said he had been “one of the strongest and most experienced climbers on our team.”

Bista, 32, a Nepali climbing guide, fell while trekking down the mountain on May 24, said Mona Shahab, a Saudi climber and friend. She said that a Sherpa administered CPR, but Bista did not respond.

Shahab called Bista “lighthearted, funny and skillful,” and a devoted husband and father. She noted that he and other guides often climbed to steep heights carrying heavy loads for their clients.

“He was a good guide, very careful, always clipping into lines, knew exactly what to say when I hit my wall, and had a way in keeping me going and pushing a little harder,” she said.

Elia Saikaly, a Canadian filmmaker who climbed Everest to make a documentary about Shahab and three other Arab women on the trail, said seeing Bista being airlifted out was devastating.

“With the amount of lives lost, you ask yourself a lot of questions about what you’re doing there, is it worth it,” he said.

Fisher, 44, a British climber, died 45 minutes after reaching the summit on May 25, according to the BBC. Several days earlier, he had warned of overcrowding on Mount Everest in a post on Instagram and announced plans to delay his ascent.

“With a single route to the summit delays caused by overcrowding could prove fatal so I am hopeful my decision to go for the 25th will mean fewer people,” he wrote. “Unless of course everyone else plays the same waiting game.”

A statement from Everest Parivar Expedition said Fisher was 492 feet below the summit when he suddenly “fell down.” A company official said guides were not able to revive him.

Kulish, 62, a Colorado lawyer, had returned to South Col after reaching the summit, his seventh and final climb in his seven summits journey, said Mark Kulish, his brother.

Kulish said his brother was “aware, fit and in a good mood” before entering his tent in the early morning of May 27. A guide later found him and administered CPR for 25 minutes, he said. A cause of death is not yet known.

“He saw his last sunrise from the highest peak on Earth,” according to a statement from his family. “He passed away doing what he loved after returning to the next camp below the peak.”