That mysterious object on a Florida beach? It’s a shipwreck.

A team of archaeologists excavated a 60-foot trench along the row of timbers Monday and Tuesday. From its burial ground, the object revealed itself as a seafaring vessel, with curved wood, ribs and sand-logged joints. 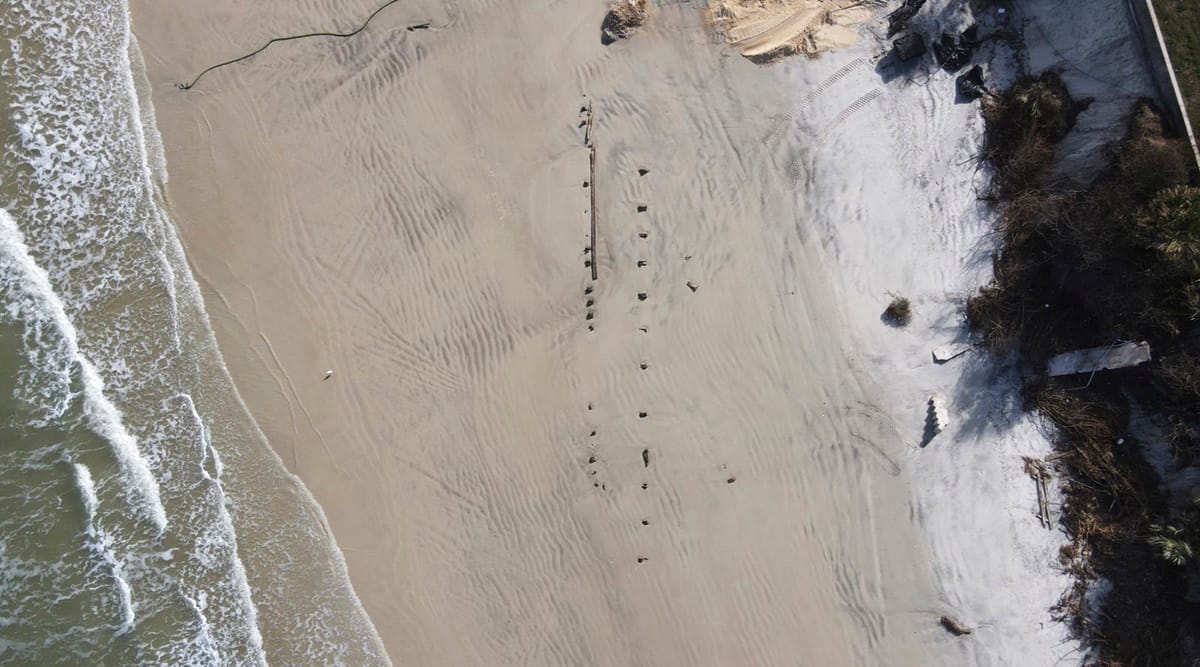 An aerial photo provided by Volusia County shows the wood and metal structure found in the sand in Daytona Beach Shores, Fla. on Dec. 9, 2022. A maritime archaeologist said it was most likely the wreck of a merchant ship from the 1800s. (Volusia County via The New York Times)
Listen to this article
That mysterious object on a Florida beach? It’s a shipwreck.
x
00:00
1x 1.5x 1.8x

After the discovery last month of a strange 80-foot-long, wood-and-metal object that had emerged from the sand at Daytona Beach Shores in Volusia County, Florida, theories about what it could be ran rampant.

Some thought it could be part of a shipwreck. There was a suggestion that it could be bleachers set up decades ago, when NASCAR ran races on the beach. Others wondered if it could be the remnants of a bygone pier.

This week, the mystery was solved. A team of archaeologists excavated a 60-foot trench along the row of timbers Monday and Tuesday. From its burial ground, the object revealed itself as a seafaring vessel, with curved wood, ribs and sand-logged joints.

“It is definitely a ship,” Chuck Meide, a maritime archaeologist, said Friday. “There is no way it is not a ship.”

The buried secrets of Florida’s maritime past are regularly revealed by shifting sands, ebbing and flowing tides, and violent disruptions from storms. In an interview as he was preparing to examine another wreck that was previously discovered on Little Talbot Island, Meide said the latest find was most likely a privately owned merchant ship from the 1800s.

As is often the case with shipwrecks, there are still more questions than answers, but knowledge of historical maritime routes helps. If the Daytona Beach Shores wreck carried fruit, it was probably headed north from the Caribbean, said Meide, director of the research arm of the St. Augustine Lighthouse & Maritime Museum in St. Augustine, Florida. If it had set off from the north, it most likely would have had manufactured goods as cargo, he said.

“As archaeologists, we certainly see value in this because it is an example of something that was an extremely important part of our society,” he said. “America is a maritime nation. It’s a relic of a bygone age and something we rarely get a glimpse into.”

On Monday, when the tide was low, Meide joined experts from the Florida Public Archaeology Network and student volunteers in exploring the site. They dug about 1 foot into the sand to carve out the trench, more than half as long as the estimated full length of the wreck. Overnight, the tide filled the gap with sand, forcing them to dig the trench again Tuesday.

Occasionally, enthusiastic beach visitors were handed shovels, with precautions about where to direct their blows. “The biggest concern was: Don’t scar the timbers with your shovel,” Meide said.

Advertisement
Check this out |Kashi Tamil Sangamam begins Thursday: What is the ancient connect between Kashi and the Tamil land?

As the work proceeded, iron bolts, nails and fasteners came into view.

“We believe it is most likely to be an 1800s shipwreck and most likely a merchant ship,” he said. “A cargo-carrying vessel that would have sailed in sight of land up and down the coast.”

Further analysis of 22 wood samples that were taken from the site could help explain where the boat was built.

“It’s not an exact science by any means, but potentially we might be able to do tree-ring analysis and get a better date,” he said. “But we don’t have complete chronologies for every species of wood.”

State archaeologists worked with the team to document the site and determine next steps, Mark Ard, a spokesperson for the Florida Department of State, said in a statement.

If the shipwreck hadn’t been discovered this year, it is possible that it would have emerged eventually. All beaches erode naturally to some extent, and for barrier islands like Daytona Beach Shores, average annual coastline recession rates of 25 feet are not uncommon, according to the National Oceanic and Atmospheric Administration.

But this year, beach erosion on Daytona Beach Shores was advanced by two powerful storms: Hurricane Nicole, which tore through Florida in November, and Hurricane Ian, which slammed the state in September and was one of the strongest storms to hit the United States in the past decade.

The shipwreck on Daytona Beach Shores is far from the first to be discovered on the Florida coast, and it probably won’t be the last. In 2020, a couple walking along Crescent Beach saw some wooden timbers and bolts sticking out of the sand. Maritime archaeologists believe it was a part of the Caroline Eddy, a 19th-century ship.

In 2021, a 17-year-old recovered a rare 1715 Fleet gold coin south of Turtle Trail Beach, off Florida’s east coast. In October, a man who was digging on a beach in St. Augustine found a diamond ring worth about $40,000.

Discoveries of wrecks like the one on Daytona Beach Shores typically enthrall the public. But uprooting them from the sand, or pulling them up from the deep, is rarely an option, requiring millions of dollars and decades of conservation work, even if there is the political will to support such projects.

“The ideas just cascade down about the romance of Spanish galleons and pirate ships,” Meide said. “It’s a mystery, and it is romantic, and we want to solve the mystery.”

So the remnants of the Daytona Beach Shores wreck will remain in place, protected by the elements of seas and storms, and a state law that is meant to deter souvenir hunters.

“Right now the wreck is burying itself again,” Meide said. “It is nestled within a wet sand matrix and has been buried for over a hundred years. As long as it stays wet and in the dark, it will last pretty much forever.”

The 2002 ‘link’ in 2022 results: 2 BJP candidates increase their victory margins