Thailand cave rescue HIGHLIGHTS:: Four boys of the soccer team which had been trapped inside the cave have been rescued Sunday from the flooded cave, a senior member of the rescue team said.

Thai rescue teams arrange water pumping system at the entrance to a flooded cave complex where 12 boys and their soccer coach have been trapped since June 23, in Mae Sai, Chiang Rai province, northern Thailand. (Royal Thai Navy via AP/File)

In a major breakthrough, four boys of the soccer team which had been trapped inside the cave have been rescued Sunday from the flooded cave, a senior member of the rescue team said. The kids were immediately given medical assistance. “They are currently at the field hospital near the cave, we are giving them a physical examination,” said Tossathep Boonthong, chief of Chiang Rai’s health department and part of the rescue team, was quoted as saying by Reuters.

The entire rescue operation to remove all 13 from inside the cave could last two to four days, depending on weather and water conditions, said army Maj. Gen. Chalongchai Chaiyakam.

With more than two weeks gone, Thailand authorities have begun the rescue operation for a group of 12 boys and their soccer coach who have been trapped in a flooded cave in northern Chiang Rai province. A former Thai Navy SEAL member died inside the cave on Thursday night due to lack of oxygen. Elon Musk had offered technological help to the Thai govt.

Thailand cave rescue HIGHLIGHTS: Rescue Operations by the Navy's SEAL unit and divers brought out four boys. Follow this space for all the latest updates.

The cave system is a formidable challenge for divers

"It's dangerous to the most experienced divers to go through," said one diver who spoke to Reuters. "It's pretty scary." The cave system, in a limestone mountain range bordering Myanmar in northern Thailand, has proven to be a formidable challenge for the international rescue coalition drawing some of the world's best divers who have volunteered to help in the operation alongside Thai Navy SEALs.

The first, nearly 1 kilometre (0.6 mile) long section from where the boys have been huddling in darkness is believed to be the most difficult, requiring a long dive and crawling through mud and debris, with some crevices barely wide enough for a person.

"The hole is really small, I have to take off my air tank to crawl through it," a 25-year-old Thai Navy SEAL who declined to be named, told Reuters before the rescue attempt. "As I do, I feel the edges of the hole on both my back and chest." (Reuters)

Four boys rescued from the cave

Four boys have been rescued from inside the cave. In an earlier update, it was erroneously mentioned as six, Reuters has issued a correction.

Thai official heading the cave rescue says the operation is going better than expected, he added that the healthiest children have been taken out first, reports AP.

Next phase of rescue mission will start in 10-20 hours

Thai official heading the cave rescue mission said that the next phase of the operation will start in 10-20 hours, reported AP

Massive rescue operation to remove boys from the cave

Four rescued boys taken to a nearby hospital in a helicopter 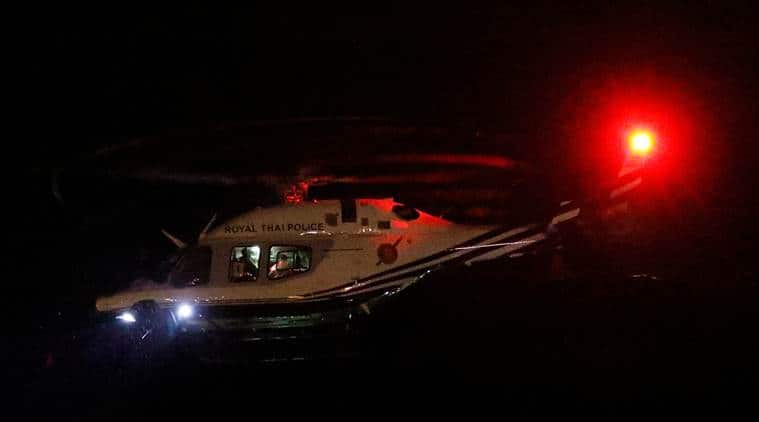 Donald Trump tweets about the rescue operation in Thailand

The U.S. is working very closely with the Government of Thailand to help get all of the children out of the cave and to safety. Very brave and talented people! 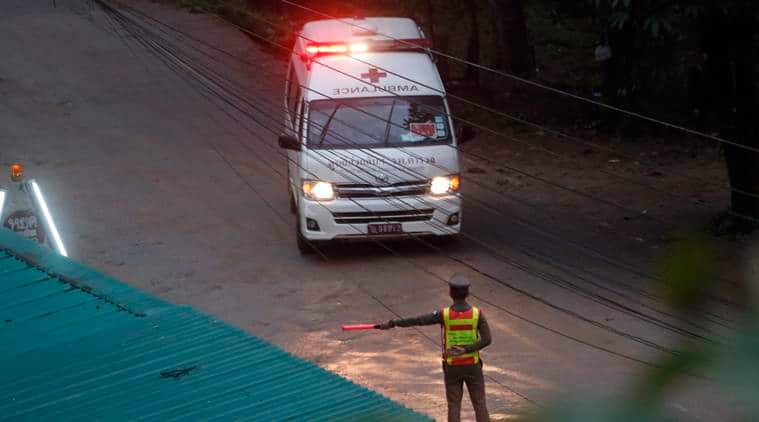 "I have received information that six have exited the cave", a senior member of the rescue team told Reuters. A helicopter flew some of the boys to the nearby city of Chiang Rai where they were taken by ambulance to hospital.

"Two kids are out. They are currently at the field hospital near the cave," said Tossathep Boonthong, chief of Chiang Rai's health department and part of the rescue team. "We are giving them a physical examination. They have not been moved to Chiang Rai hospital yet," Tossathep told Reuters.

The first two members of a Thai schoolboy soccer team have been rescued from the flooded cave where they had been trapped for more than two weeks, a local rescue official was quoted as saying by Reuters.

Thirteen foreign divers and five members of Thailand's elite navy SEAL unit are trying to bring the boys - some as young as 11 and weak swimmers – through narrow, submerged passageways. Bursts of heavy monsoon rain soaked the Tham Luang Cave area in northern Chiang Rai province on Sunday and storms were expected in the coming weeks, increasing the risks in what has been called a "war with water and time" to save the team.

Rescuing them all could take three to four days and depended on the weather, an army commander involved in the mission said. The rescue teams had rehearsed the plan for several days, Narongsak Osottanakorn, head of the rescue mission said, and had managed to drain the water level in the cave considerably, but needed to move fast.

Kobchai Boonyaorana, deputy director-general of the Disaster Prevention and Mitigation Department of the Interior Ministry, told reporters Sunday that the water level in the cave had continued to recede, and that rainfall was less than expected.

But weather forecasters warned heavy rain was on its way, which could flood the area completely. They said there was a 60-per cent chance of moderate to heavy rain on Sunday afternoon, and that heavier rain would continue from Monday to Thursday.

The rescue operation was launched after several days of relatively mild weather, as more than 100 million of litres of water were pumped out of the cave. (AFP)

Rescuer arrives near the cave in northern Thailand Sunday, the Thai authorities are racing to pump out water from the flooded cave before more rains are forecast to hit the northern region. (AP Photo/Sakchai Lalit)

Thai policemen stand guard near a cave where 12 boys and their soccer coach have been trapped since June 23, in Mae Sai, Chiang Rai province, in northern Thailand. (Source: AP Photo/Sakchai Lalit)

It may take 2-4 days for the entire team to reach safety: Rescuers

The risky diving operation to bring out the 12 trapped children has started and the first boy is expected to be out of the cave around 9 pm Sunday (10 am ET) at the earliest. Rescuers say it may take 2-4 days for the entire team to reach safety, depending on conditions inside the cave.

The local governor in charge of the rescue says the mission was launched Sunday morning because floodwaters inside the cave are at their lowest level in days and rains forecast to hit the region risk flooding the cave again. (AP)

According to Guardian reports, Thailand is hit by heavy rainfall within one mile around the cave, however, this does not hinder the rescue operations as it continues apace.

The Thai Navy SEAL had shared a picture on Facebook mentioning that they were ready for the rescue operations to help the group of young boys and their coach who are trapped inside the cave with help from an international team.

Some good feedback from cave experts in Thailand. Iterating with them on an escape pod design that might be safe enough to try. Also building an inflatable tube with airlocks. Less likely to work, given tricky contours, but great if it does.

Elon Musk had wished the 'extremely talented dive team' luck in a tweet which also seems to indicate his involvement in the rescue mission.

Thailand cave rescue HIGHLIGHTS: A group of 12 boys and their soccer coach have been stuck in the Northern Thailand cave since June 23. There is 'limited time' to save the group before heavy rains set in, according to news agency AP.