Syria airstrikes HIGHLIGHTS: During the meeting of the Security Council, UN Secretary General urged all member states to show restraint and avoid any acts that could escalate matters and worsen the suffering of the Syrians. 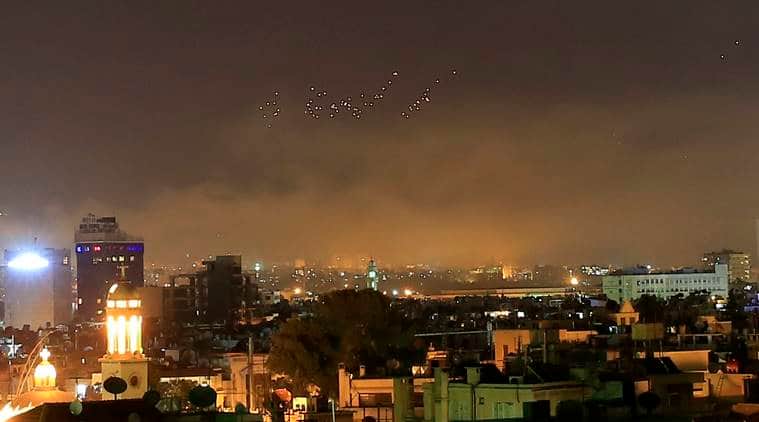 Syria airstrikes HIGHLIGHTS: Damascus skies erupt with anti-aircraft fire and smoke as the US launches an attack on Syria targeting different parts of the Syrian capital Damascus, on Saturday. (AP Photo/Hassan Ammar)

The UN Security Council has rejected a Russian resolution which called for condemnation of airstrikes by the United States and its allies against Syria. The Council on Saturday held an urgent meeting, on request of Russia, on the coordinated airstrikes by the US, UK and France in Damascus and surrounding areas on Friday. The attack was in retaliation to the alleged chemical attacks by President Bashar al-Assad last week, which killed at least 60 people. Russia had urged the council to condemn the “aggression” against Syria.

During the meeting, UN Secretary General urged all member states to show restraint and avoid any acts that could escalate matters and worsen the suffering of the Syrians. “I call on all members to act consistently with the UN Charter and international law, including norms against the use of chemical weapons. If the law is ignored, it is undermined. There is no military solution to the crisis; the solution must be political,” he said.

US President Donald Trump on Friday gave the orders to pound Syria with air strikes, with Russian President Vladimir Putin saying that the attack would only aggravate the humanitarian catastrophe in the area.

French defense minister Jean-Yves Le Drian said Russia was warned ahead of joint US, UK, French air strike on Syria. The minister said strikes conducted by French air force in Syria were not targeted at Syria’s allies. He added that the joint military operation in Syria is legitimate, limited and proportionate, according to Reuters.

Last week, a gas attack in Syria had killed at least 60 people and injured several others. The attack evoked large-scale criticism of President Assad’s regime. Trump condemned the attack calling it the work of a “monster”. He was also critical of both Russia and Iran, which have backed Assad’s government.