Dead fish and other sea animals are now washing up on Sri Lanka’s shores. Lifeless birds and turtles have also been sighted on the coast, which is now dotted with plastic pellets. 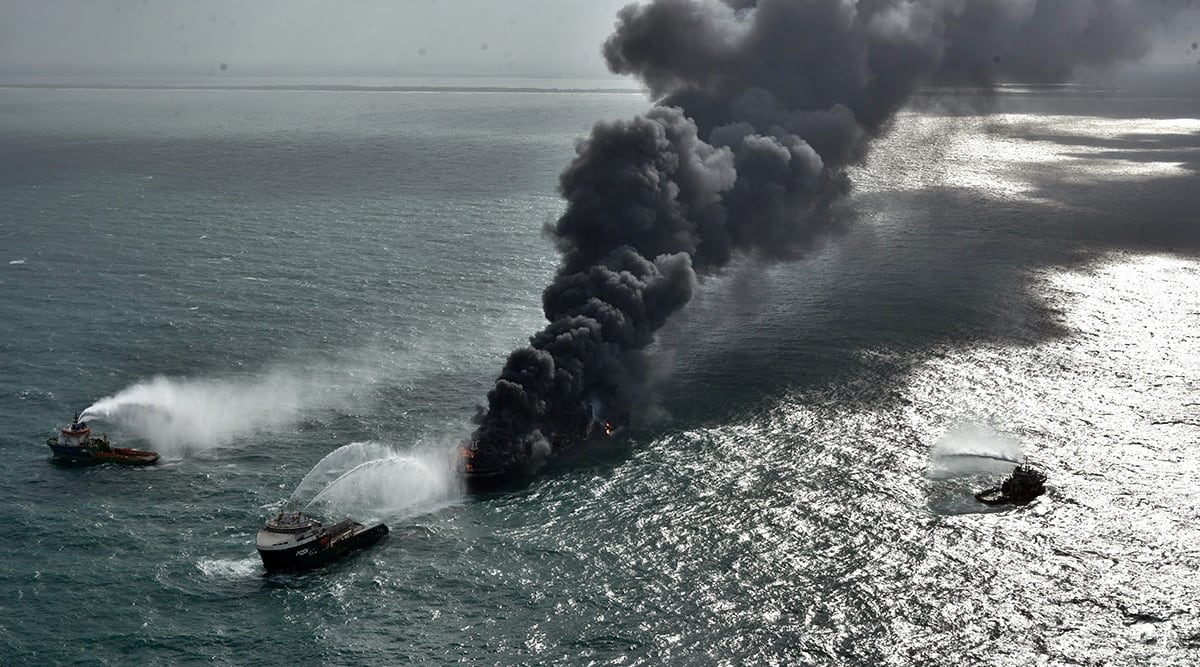 Smoke rises from a fire onboard the MV X-Press Pearl container in the seas off the Colombo Harbour, in Sri Lanka May 26, 2021. (Reuters)

Weeks after a 610-foot chemical-laden cargo ship sunk off the coast of Sri Lanka, the country is grappling with what is widely being described as the biggest maritime disaster it has ever witnessed. The Singapore-registered X-Press Pearl had been on fire for almost a fortnight, before it was doused earlier this month. Since then, the ship has settled on the bottom of the sea.

But the ecological damage caused by the incident has already begun to show. Dead fish and other sea animals are now washing up on Sri Lanka’s shores. Lifeless birds and turtles have also been sighted on the coast, which is now dotted with plastic pellets. The water surrounding the site of the disaster appears discoloured in satellite images, heightening fears of a potential oil or chemical spill.

Aboard the ship were over 1,000 containers, several of which contained toxic chemicals such as nitric acid, sodium methoxide and methanol, The Washington Post reported.

The Sri Lankan government is yet to confirm whether an oil spill has occurred. According to Dharshani Lahandapura, Chairperson of Marine Environment Protection Agency (MEPA), the oil in the fuel tanks of the cargo ship had been burned out during the fire onboard.

Subscriber Only Stories
View All
Delhi Confidential: Attorney, always
Gender gap in undergraduate programmes widens, gains of last few years lo...
Budget signal from states for FM: Capital spending gets boost
In a remote mountain village in Tamil Nadu, doctors are just a click away
Apply New Year promo code SD25
In this photo provided by Sri Lanka Air Force, tug boats and ships battle the fire on MT New Diamond, off the eastern coast of Sri Lanka in the Indian Ocean, Saturday, Sept. 5, 2020. The fire on the large oil tanker off Sri Lanka’s coast has been brought under control but is still not extinguished, the navy said Saturday. (AP)

“There were 300 metric tons of fuel in the ship. We test the water near the wreck daily but so far we have not seen signs of an oil leak,” she told Sri Lankan daily The Island.

Earlier this week, the National Aquatic Resources Agency (NARA) had begun investigating the oil patch that was appearing in satellite images of the site, Sri Lankan newspaper Nation reported. In a statement, the operators of the container ship said that there was no “noticeable fuel oil spill” from the X-Press Pearl.

On Monday, the captain of the cargo ship, Vitaly Tyutkalo, was arrested for violating the country’s Marine Pollutions Prevention Act. He was granted bail on the same day, local police said.

Arjuna Hettiarachchi the Chairman of the Sea Consortium Lanka PVT Ltd, the local agent of the X-Press Pearl, was arrested by the country’s Criminal Investigation Department (CID) on Wednesday after an investigation found that the agency had acted with negligence. However, he, too, was granted bail later that day.

The fisheries and tourism sectors have taken a significant hit. In an interview with Sri Lanka’s The Sunday Morning, Marine Environment Protection Authority (MEPA) Chairperson Attorney-at-Law Darshani Lahandapura said: “An expert panel has been appointed comprising of 28 individuals from various fields such as environmental economics, fisheries, biodiversity, etc., to determine the compensation that would be sought, and when the compensation is being calculated, all these areas – the livelihood of the community, tourism, the damage done to the biodiversity and flora and fauna – would be also be taken into account.”

The Colombo-bound ship was sailing from Gujarat when a fire broke out onboard on May 20. For 12 days, the Sri Lankan Navy and Indian coastguard worked together to try and douse the blaze and to prevent the ship from sinking. Fishing in the area was soon suspended and environmentalists warned of the impact the disaster could have on marine life.