The government declared a state of emergency after an angry mob surrounded the private residence of President Gotabaya Rajapaksa on March 31. 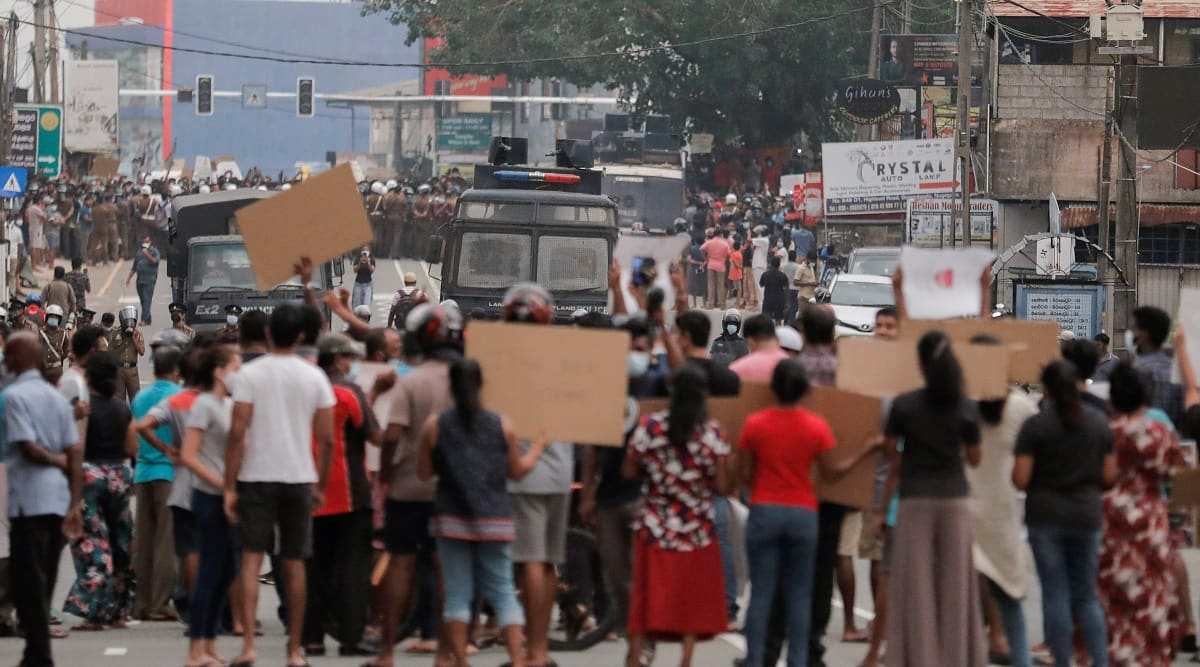 People attend a protest against Sri Lankan President Gotabaya Rajapaksa in a residential area after the government imposed a curfew following a clash between police and protestors near the President's residence during a protest amid the country's economic crisis in Colombo. (Reuters)

Sri Lanka’s Cabinet of Ministers resigned with immediate effect late on Sunday night, as the country experiences its worst economic crisis of all time.

Speaking to reporters, Education Minister and Leader of the House, Dinesh Gunawardena said the Cabinet Ministers handed over their resignations to Prime Minister Mahinda Rajapaksa. He proffered no reason for the mass resignation.

However, political experts said the ministers came under intense pressure from the public over the government’s alleged “mishandling” of the economic crisis, triggered by the shortage in the foreign exchange reserve.

Widespread public protests were seen throughout the evening in spite of the imposition of curfew which is due to end on Monday morning. The enraged public has been demanding the resignation of President Gotabaya Rajapaksa.

The government declared a state of emergency after an angry mob surrounded the private residence of Rajapaksa on March 31. A planned social media triggered mass protest was scheduled for Sunday. However, the government responded by imposing a 36-hour curfew.

Since evening, rumours have been floating to the effect that Rajapaksa may opt for an interim government to handle the economic crisis.

Distrubing scenes were seen across the island. Sri Lankan police fired tear gas and water cannons at hundreds of university students during a protest in the central province. The protest was held despite the curfew. The government’s poor handling of the economic crisis where people currently endure long hours of power outages and scarcity of essentials has angered the public which planned country-wide protests on Sunday.

The government ordered internet service providers to restrict social media access, tightening curbs to prevent planned demonstrations calling for President Rajapaksa’s ouster over soaring living costs and a foreign exchange crisis. The social media curbs were lifted in the second half of Sunday.

The Opposition lawmakers marched towards Colombo’s Independence Square, chanting slogans and carrying placards that read: ‘Stop Suppression’ and ‘Gota go home’. Police officials set up barricades leading up to the Independence Square, which was built to commemorate Sri Lanka’s independence in 1948.

In Central Province, hundreds of students from the University of Peradeniya took to streets to protest against the present state of affairs in the country. However, police installed barricades close to the university. University Students accompanied by their lecturers proceeded towards the Galaha Junction, and tensions boiled over when they attempted to remove the barricades set up by the police, News 1st channel reported.

Sri Lankan undergraduates protest blocking a highway demanding the government step down during a curfew in Colombo. (AP)

Police and riot police used water cannons to disperse the crowd and thereafter fired tear gas, it said, adding that the situation is tense in the region.

In Western Province, a total of 664 people were arrested for violating the curfew and trying to stage an anti-government rally.

Opposition lawmakers, led by their leader Sajith Premadasa, had set off on a march towards the iconic Independence Square in Colombo, defying a weekend curfew imposed by the government on Saturday, ahead of the planned protest for Sunday. “We are protesting the government’s abuse of the public security ordinance to deny the public’s right to protest,” he said.

The protest was organised by social media activists against the ongoing economic crisis and hardships heaped on people due to shortages of essentials. A 53-year old man, who was protesting outside the private residence of President Rajapaksa over the long power cuts in the country due to the ongoing economic crisis, got electrocuted after he climbed a electricity pole, police said.

Namal Rajapaksa, the sports minister and President Rajapaksa’s nephew, told reporters that the social media blockade was useless as many people would use Virtual Private Network (VPN) to access social media sites.

The move was aimed at preventing masses from gathering in Colombo to protest the government’s failure to provide relief to the public suffering from shortages of food, essentials, fuel and medicine amidst hours-long power cuts, the Colombo Page newspaper reported.

Later, the government lifted the ban it had imposed on social media platforms after declaring a nationwide public emergency. The services of Facebook, Twitter, YouTube, Instagram, TokTok, Snapchat, WhatsApp, Viber, Telegram, and Facebook Messenger were restored after 15 hours, according to an official.

Meanwhile, former minister Wimal Weerawansa called for appointment of an all-party interim government to address the crisis. He said the proposal has been presented to the President and the Prime Minister, and they received a positive response from both.

Weerawansa said that he along with former minister Udaya Gammanpila, Vasudeva Nanayakkara, and Tiran Alles attended the meetings with the President and the Prime Minister. “Given the present situation in the country, we believe that the existing Cabinet of Ministers cannot function to address these crises. Therefore, we call for the Cabinet to be disbanded and reach for an all-party or multi-party agreement for an interim government,” he told reporters.

Former cricket skipper Mahela Jayawardena said that certain people controlling the economy of Sri Lanka have lost the people’s confidence and must stand down.

In a statement, he said these problems are man-made and can be fixed by the right, qualified people. “We then need a good team to give the country confidence and belief. There is no time to waste. It is time to be humble, not make excuses and to do the right thing,” he said.

Sri Lanka is currently experiencing its worst economic crisis in history. With long lines for fuel, cooking gas, essentials in short supply and long hours of power cuts the public has been suffering for weeks.

Rajapaksa has defended his government’s actions, saying the foreign exchange crisis was not his making and the economic downturn was largely pandemic driven where the island’s tourism revenue and inward remittances waning.

Vaibhav Arora: From thinking about quitting cricket, knocking off Pujara’s middle stump to playing in IPL