Security was stepped up today for the national day of mourning as the country's leaders wrangled with the aftermath of an apparent homegrown militant attack and massive intelligence failure. 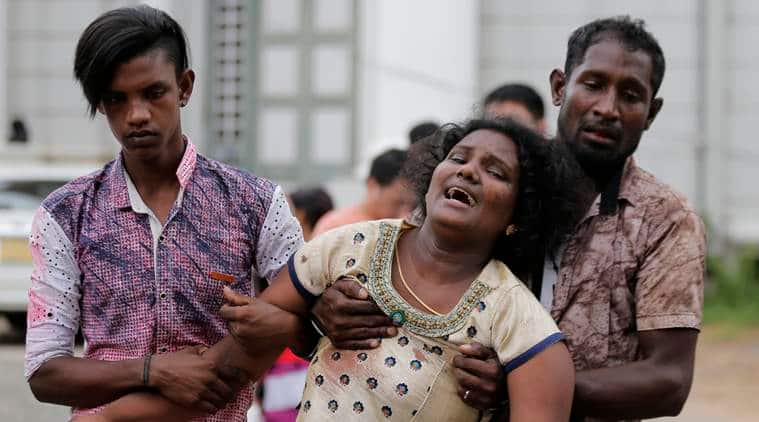 Relatives of a blast victim grieve outside a morgue in Colombo on Sunday. (AP)

In a televised address to the nation, Sri Lanka President Maithripala Sirisena Tuesday said he expects to change the heads of the country’s defence forces within a day following their failure to prevent blasts that killed over 300 people, despite the fact they had prior information about the attacks. “I will completely restructure the police and security forces in the coming weeks. I expect to change the heads of defence establishments within next 24 hours,” Sirisena said.

“The security officials who got the intelligence report from a foreign nation did not share it with me. Appropriate actions would have been taken. I have decided to take stern action against these officials.”

The president’s remarks come hours after the Islamic State group claimed responsibility of the multiple blasts that killed over 300 people, including 31 foreigners, on Easter Sunday, one of the deadliest in a decade.

Meanwhile, Sri Lankan Prime Minister Ranil Wickremesinghe also warned that there are more explosives and militants ‘out there’ hours after the Islamic State claimed responsibility for the multiple bombings. The prime minister’s comments came at a press conference even as he indicated that some officials will likely lose their jobs over intelligence lapses surrounding the attack, reported AP.

In a statement issued through its propaganda ‘Amaq’ news agency, the ISIS said that “the executors of the attack that targeted citizens of coalition states and Christians in Sri Lanka two days ago were with the group,” according to the Site Intelligence Group, which monitors jihadist activities.

On the sidelines of this fresh development, Sri Lanka has also put all police stations in capital Colombo on high alert following reports of a lorry and van carrying explosives.

Security was stepped up today for the national day of mourning as the country’s leaders wrangled with the aftermath of an apparent homegrown militant attack and massive intelligence failure that shattered a decade of peace in the country following the end of the brutal civil war with the LTTE. Relatives weep near the coffin with the remains of 12-year Sneha Savindi, who was a victim of Easter Sunday bombing at St. Sebastian Church, after it returned home, Monday, April 22, 2019 in Negombo, Sri Lanka.  (AP Photo/Gemunu Amarasinghe)

The Islamic State group claims to have identified the attackers who carried out the suicide bombings after earlier asserting it was responsible for the assault that killed over 320 people. The group put out a full statement on its Amaq news agency late Tuesday detailing where each attacker was allegedly deployed. It gave only the nom de guerre of each attacker and didn’t specify their nationalities.

The group, which has lost all the territory it once held in Iraq and Syria, has made a series of unsupported claims of responsibility. The militant group said six were suicide bombers who “immerse” themselves among the victims before blowing up their vests. It said one attacker clashed with police in Dematagoda.

PM Wickremesinghe warns: There are more militants ‘out there’

Sri Lankan Prime Minister Ranil Wickremesinghe warned that there are more explosives and militants “out there” after Easter suicide bombings that killed over 320 people. He also added that some officials will likely lose their jobs over intelligence lapses surrounding the attack.

PM Ranil Wickremesinghe said the investigators are making good progress in regard to identifying the culprits. Many countries are helping us, starting from United States. “I condole the death of all those who lost their lives. It is possible it could have been due to Christchurch attack (on 2 mosques in New Zealand), but we cannot say yet. Police who are questioning will be able to say,” he said.

CCTV footage emerged on Tuesday of one of the seven suicide bombers in Sri Lanka patting a young girl’s head seconds before he enters a crowded church where a powerful blast killed nearly 100 worshippers on Easter Sunday.

The video shows the bearded man, wearing a large, heavy backpack, placing his hand on the child, who is with an adult, as they almost bump into each other outside the St Sebastian’s Catholic church in Negombo on Sri Lanka’s west coast.

In some more gloomy news for India, two more JDS workers were Tuesday confirmed dead in the devastating Colombo serial bomb blasts as shattered relatives of the victims waited anxiously to bring the bodies back home and perform the last rites. The High Commission of India in Colombo tweeted confirming the death of two more persons, pushing up to 10 the number of victims from Karnataka, including eight JDS workers on a holiday after a grinding campaign in the Lok Sabha polls.

Regret to confirm the deaths of two more Indian nationals Mr. A Maregowda and Mr. H Puttaraju in the blasts in Sri Lanka on Sunday, taking the total number of Indian deaths in the tragedy to 10 as of now.@SushmaSwaraj

The agonising pain and wait for over 48 hours finally came to an end for the family of 37-year-old Puttaraju, a JD(S) worker, with the High Commission of India in Colombo Tuesday confirming his death in the multiple blasts that rocked Sri Lanka on Easter Sunday. “We just got to know about his death, Sushma Swaraj (External Affairs Minister) has tweeted.

Earlier today, Sri Lanka’s state minister of defense said the attack was “carried out in retaliation” for the shooting massacre at two New Zealand mosques last month, according to a statement.

Ruwan Wijewardene told Parliament the government had information that the series of bombings was carried out “by an Islamic fundamentalist group” in response to the Christchurch attacks. He did not provide evidence or explain the source of the information. 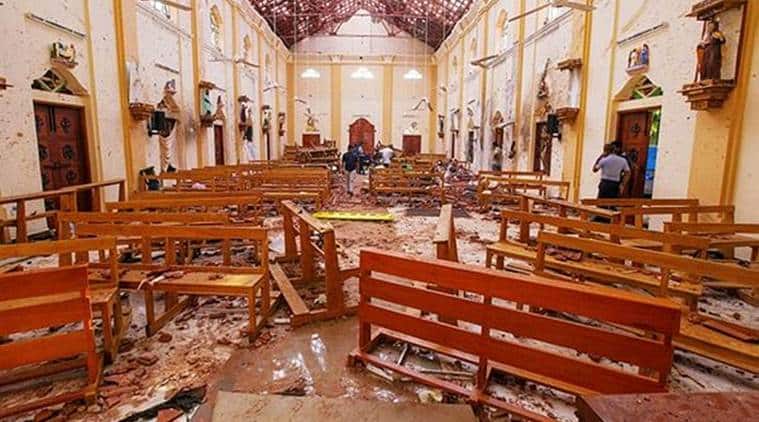 A blood-spattered statue of Jesus Christ is pictured while crime scene officials inspect the site of a bomb blast on Sunday. (Reuters)

The office of New Zealand’s prime minister says she is aware of comments linking Sri Lanka’s Easter bombings to the mosque attacks in Christchurch, though it hasn’t “seen any intelligence upon which such an assessment might be based.”

The statement came Tuesday after Sri Lanka’s minister of defense, Ruwan Wijewardene, made the claim to Parliament, without offering evidence.

New Zealand Prime Minister Jacinda Ardern’s office also added that it understood “the Sri Lankan investigation into the attack is in its early stages.”

The first mass funerals were held today as Sri Lanka marked a day of mourning for the victims of the Easter Sunday bombings. The funeral was held at the St Sebastian’s church in Negombo, north of Colombo, which was one of the places targeted in the deadly suicide blasts.

Earlier, a moment of silence was observed, reflecting the time the first of six bombs detonated. Flags were lowered to half-mast and people bowed their heads in silence in respect to the victims as well as the 500 people injured in the attacks.

40 suspects arrested in the wake of deadly bombings

Close on the heels of his address to the Parliament, at least 40 suspects, including the driver of a van allegedly used by the suicide bombers, have been arrested in connection with the Easter Sunday, a police official told PTI. The police made 16 more arrests during the past 24 hours, taking the total number of arrested suspects to 40, police spokesman Ruwan Gunasekera told PTI.

“26 of them are with the CID, three are being held by the Terrorism Investigation Division (TID). Nine of them have been already remanded and two are being held at a Colombo south police station,” Gunasekera was quoted as saying by PTI. Police officials and catholic priests stand inside the church after a bomb blast in Negombo, Sri Lanka April 21, 2019. REUTERS/Stringer NO ARCHIVES. NO RESALES.

The history of Buddhist-majority Sri Lanka, a country with large Hindu, Muslim and Christian minorities, is rife with ethnic and sectarian conflict.

In the nation’s 26-year civil war, the Tamil Tigers, a powerful rebel army known for using suicide bombers, was crushed by the government in 2009. Anti-Muslim bigotry fed by Buddhist nationalists has swept the country recently.

In March 2018, Buddhist mobs ransacked businesses and set houses on fire in Muslim neighbourhoods around Kandy, a city in central Sri Lanka that is popular with tourists.