The monastery, with a history of more than 1,000 years, caught fire early evening. 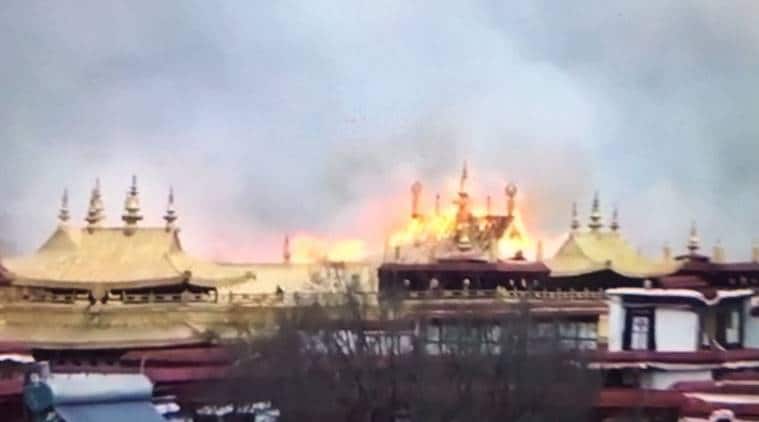 The monastery, with a history of more than 1,000 years, caught fire early evening. (Picture source: Twitter/@josepalay)

One of the most sacred locations in Tibetan Buddhism, the Jokhang Monastery in Lhasa, caught fire on Saturday but there were no reports of any casualties and the extent of the damage was unclear. The official Tibet Daily said part of the monastery, a UNESCO World Heritage Site with a history of more than 1,000 years, caught fire in the early evening. “The fire was quickly extinguished, there are no casualties and order is normal in its environs,” the newspaper said on its WeChat account.

Tibet’s Communist Party chief Wu Yingjie has gone to the scene to oversee operations, it added, without giving other details. Other state media outlets showed pictures of flames leaping into the sky and water being sprayed on them by the fire services. China has ruled Tibet with an iron fist since Chinese troops marched in in 1950, in what Beijing terms a “peaceful liberation”.

The Chinese government routinely rejects accusations from rights groups and exiled Tibetans about repression of the largely Buddhist Tibetans, saying its rule has brought prosperity to what was once a poor and backward place. Beijing has also made a great show of the amount of money it has spent to preserve and protect traditional Tibetan culture, including the many temples and monasteries that dot Tibet.

Devastating news from Lhasa of the Jokhang temple on fire. pic.twitter.com/LXiIlvc7V5