Russian blunders in Chernobyl: ‘They came and did whatever they wanted.’

Apparently undeterred by safety concerns, the Russian forces tramped about the grounds with bulldozers and tanks, digging trenches and bunkers. Widespread destruction and debris in Bucha, Ukraine, on April 3, 2022.

As the staging ground for an assault on the Ukrainian capital of Kyiv, the Chernobyl Exclusion Zone, one of the most toxic places on Earth, was probably not the best choice. But that did not seem to bother the Russian generals who took over the site in the early stages of the war.

“We told them not to do it, that it was dangerous, but they ignored us,” Valeriy Simyonov, chief safety engineer for the Chernobyl nuclear site, said in an interview.

Apparently undeterred by safety concerns, the Russian forces tramped about the grounds with bulldozers and tanks, digging trenches and bunkers — and exposing themselves to potentially harmful doses of radiation lingering beneath the surface.

In a visit to the recently liberated nuclear station — site of the world’s worst nuclear disaster, in 1986 — wind blew swirls of dust along the roads, and scenes of disregard for safety were everywhere, although Ukrainian nuclear officials say no major radiation leak was triggered by Russia’s monthlong military occupation.

At just one site of extensive trenching a few hundred yards outside the town of Chernobyl, the Russian army had dug an elaborate maze of sunken walkways and bunkers. An abandoned armoured personnel carrier sat nearby.

The soldiers had apparently camped out for weeks in the radioactive forest. Although international nuclear safety experts say they have not confirmed any cases of radiation sickness among the soldiers, the cancers and other potential health problems associated with radiation exposure might not develop until decades later.

Simyonov said the Russian military had deployed officers from a nuclear, biological and chemical unit, as well as experts from Rosatom, Russia’s state nuclear power company, who consulted with the Ukrainian scientists.

But the Russian nuclear experts seemed to hold little sway over the army commanders, he said. The military men seemed more preoccupied with planning the assault on Kyiv and, after that failed, using Chernobyl as an escape route to Belarus for their badly mauled troops.

“They came and did whatever they wanted” in the zone around the station, Simyonov said. Despite efforts by him and other Ukrainian nuclear engineers and technicians who remained at the site through the occupation, working around-the-clock and unable to leave except for one shift change in late March, the entrenching continued. 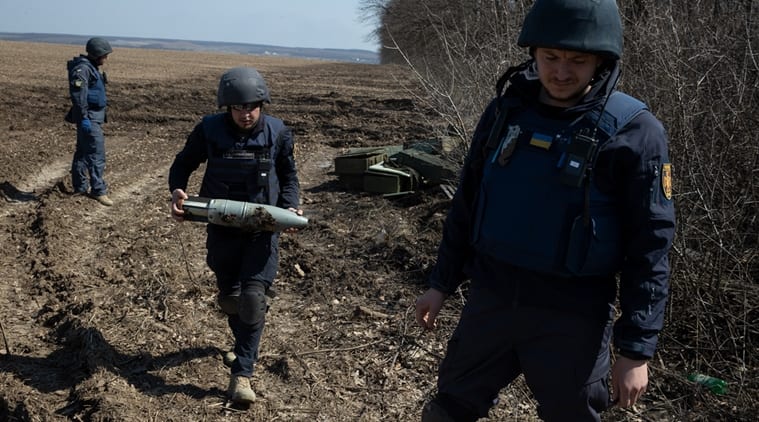 Emergency responders on the outskirts of Kharkiv, Ukraine, close to Russian occupied territory where bombing has been heavy, on April 7, 2022. (Tyler Hicks/The New York Times)

The earthworks were not the only instance of recklessness in the treatment of a site so toxic that it still holds the potential to spread radiation well beyond Ukraine’s borders.

In a particularly ill-advised action, a Russian soldier from a chemical, biological and nuclear protection unit picked up a source of cobalt-60 at one waste storage site with his bare hands, exposing himself to so much radiation in a few seconds that it went off the scales of a Geiger counter, Simyonov said. It was not clear what happened to the man, he said.

The most concerning moment, Simyonov said, came in mid-March, when electrical power was cut to a cooling pool that stores spent nuclear fuel rods that contain many times more radioactive material than was dispersed in the 1986 catastrophe. That raised the concern among Ukrainians of a fire if the water cooling the fuel rods boiled away, exposing them to the air, although that prospect was quickly dismissed by experts. “They’re emphasising the worst-case scenarios, which are possible but not necessarily plausible,” said Edwin Lyman, a reactor expert at the Union of Concerned Scientists.

The greater risk in a prolonged electricity shut-off, experts say, was that hydrogen generated by the spent fuel could accumulate and explode. Bruno Chareyron, laboratory director at CRIIRAD, a French group that monitors radiation risks, cited a 2008 study of the Chernobyl site suggesting this could happen within about 15 days.

Eventually, however, electricity was restored to the plant, allaying any fears.

The march to Kyiv on the western bank of the Dnieper River began and ended in Chernobyl for the 31st and 36th Combined Arms Armies of the Russian military, which travelled with an auxiliary of special forces and ethnic Chechen combatants.

The formation surged into Ukraine on Feb. 24, fought for most of a month in the suburbs of Kyiv and then retreated, leaving in its wake incinerated armoured vehicles, its own war dead, widespread destruction and evidence of human rights abuses, including hundreds of civilian bodies on the streets in the town of Bucha. 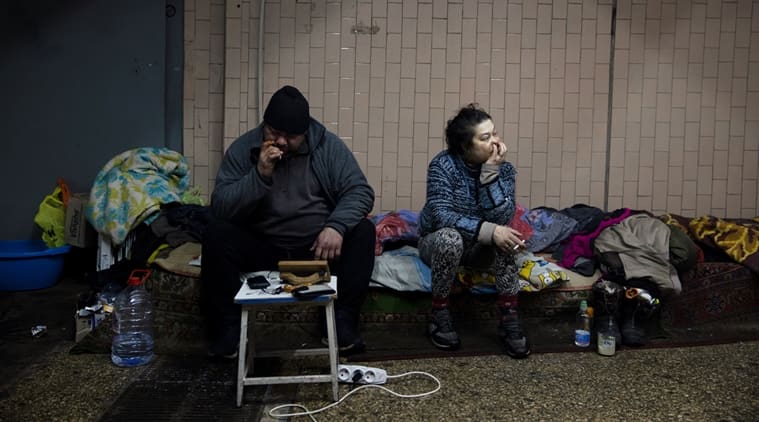 A man and woman in an underground train station, where they have temporarily made their home, following a night of Russian bomb attacks in Kharkiv, Ukraine, on April 8, 2022. (Tyler Hicks/The New York Times)

As they retreated from Chernobyl, Russian troops blew up a bridge in the exclusion zone and planted a dense maze of anti-personnel mines, trip wires and booby traps around the defunct station. Two Ukrainian soldiers have stepped on mines in the past week, according to the Ukrainian government agency that manages the site.

In a bizarre final sign of the unit’s misadventures, Ukrainian soldiers found discarded appliances and electronic goods on roads in the Chernobyl zone. These were apparently looted from towns deeper inside Ukraine and cast off for unclear reasons in the final retreat. Reporters found one washing machine on a road shoulder just outside the town of Chernobyl.

Employees of the exclusion zone management agency based in Chernobyl suffered under the Russian occupation, but nothing approaching the barbarity visited on civilians in Bucha and other towns around Kyiv by the Russian forces.

The Russians had come in seemingly endless columns on the first day of the war, said Natasha Siloshenko, 45, a cook at a cafeteria serving nuclear workers. She had watched, warily, from a side street.

“There was a sea of vehicles,” she said. “They came in waves through the zone, driving fast toward Kyiv.”

There was little or no combat in the zone, so far as she could tell. The armoured columns merely passed through.

During the occupation, Russian soldiers searched the apartments of nuclear technicians and engineers, firefighters and support staff in the town of Chernobyl. “They took valuable items” from apartments, she said, but there was little violence.

Workers tried to caution the Russians about radiation risks, to little avail.

The background radiation in most of the 18-mile exclusion zone around the nuclear plant, after 36 years, poses scant risks and is about equivalent to a high-altitude airplane flight. But in invisible hot spots, some covering an acre or two, some just a few square yards, radiation can soar to thousands of times normal ambient levels. A soldier in such a spot would be exposed every hour to what experts consider a safe limit for an entire year, said Chareyron, the nuclear expert. The most-dangerous isotopes in the soil are cesium-137, strontium-90 and various isotopes of plutonium. Days or weeks spent in these areas bring a high risk of causing cancer, he said.

Throughout the zone, radioactive particles have settled into the soil to a depth of a few inches to a foot. They pose little threat if left underground, where their half-lives would tick by mostly harmlessly for decades or hundreds of years.

Until the Russian invasion, the main threat posed by this contamination was its absorption into mosses and trees that can burn in wildfires, disseminating the poisons in smoke, or through birds that eat radioactive, ground-dwelling insects.

“We told them, ‘This is the zone, you cannot go to certain places,’” Siloshenko said the workers had told the Russians. “They ignored us.”

At one dug-in position, Russian troops had burrowed a bunker from the sandy side of a road embankment and left heaps of trash — food wrappings, discarded boots, a blackened cooking pot — suggesting they had lived in the underground space for an extended time.

Nearby, a bulldozer had scraped away the topsoil to build berms for artillery emplacements and a half-dozen foxholes.

The forest around had recently burned, suggesting a fire had swept over the area during the Russian occupation, adding radioactive smoke to the exposure of the Russian soldiers, along with dust from disturbed ground.

The director-general of the International Atomic Energy Agency, Rafael Mariano Grossi, issued a statement Thursday saying the agency had been unable to confirm reports of Russian soldiers sickened by radiation in the zone or to make an independent assessment of the radiation levels at the site. The agency’s automated radiation sensors in Chernobyl have been inoperable for more than a month, he said.

The Ukrainian government’s radiation monitors ceased working the first day of the war, said Kateryna Pavlova, a spokesperson for the Ukrainian Chernobyl Zone Management Agency. Readings from satellites, she said, showed slightly elevated radiation in some areas after the Russian occupation.

Armoured vehicles that run on treads, rather than wheels, pose the primary risk for radiation safety in a wider area, as they churn up the radioactive soil and spread it into areas of Belarus and Russia as they retreat, Pavlova said. “The next person who comes along can be contaminated,” she said.

Although the five-day cutoff in electricity did not lead to any disasters, it was still cause for enormous anxiety among the plant’s operators, said Sergei Makluk, a shift supervisor interviewed at the nuclear station Thursday evening.

The backup generators that kicked in require about 18,000 gallons of diesel fuel a day. In the first days, Russian officers assured plant employees that they would have enough fuel, drawn from the supplies being trucked in for armoured vehicles in the fighting in the Kyiv suburbs, Makluk said. But by the fifth day, with the military’s well-documented logistical problems, the officers said they would no longer supply the diesel.

“They said, ‘There’s not enough fuel for the front,’” and that a power cable leading to Belarus should be used to draw electricity from the Belarusian grid to cool the waste pool instead.

Simyonov, the chief safety engineer, characterised the threat to halt diesel supplies for generators as “blackmail” to force the authorities in Belarus to resolve the problem. However it happened, the electricity was restored in time and the nuclear fuel never came close to overheating.

All in all, the trench digging and other dubious activities posed a far-lower risk than the waste pool, and most of that to the Russian soldiers themselves, Simyonov said, adding wryly: “We invite them back to dig more trenches here, if they want.”