Speaking at the Plenary Session of the 19th Annual Meeting of the Valdai Discussion Club in Moscow, Putin called the 'Make in India' initiative a "significant effort". 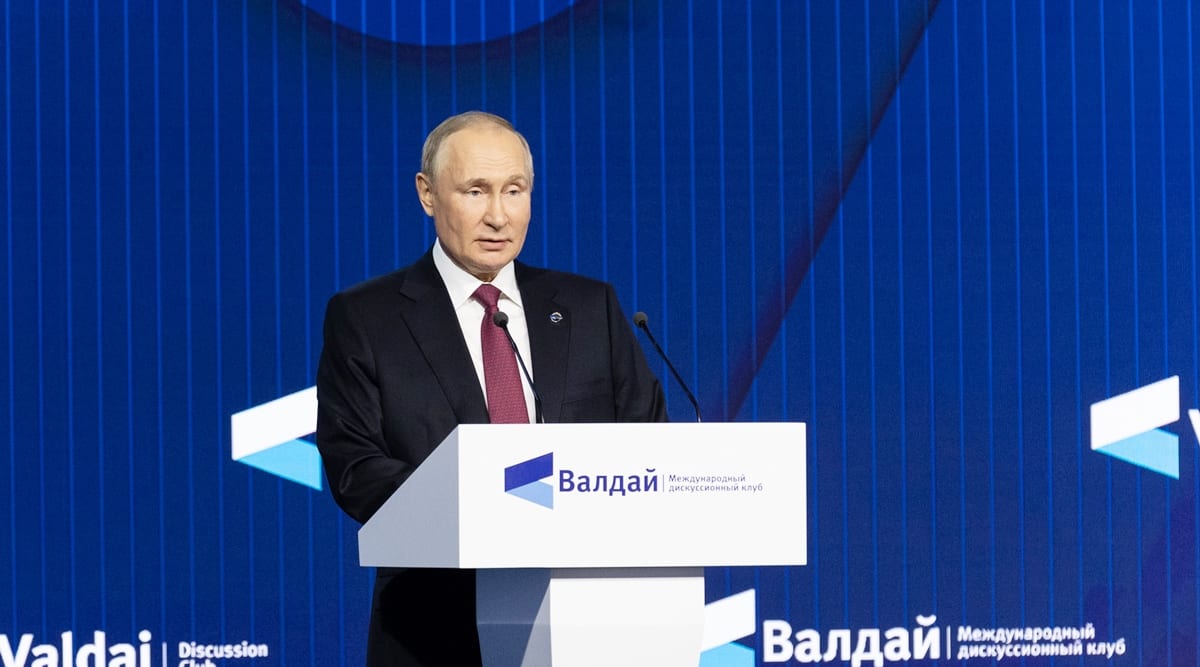 Praising Prime Minister Narendra Modi for pursuing an independent foreign policy despite “attempts to stop him”, Russian President Vladimir Putin has said India’s role in global affairs will grow in the days ahead.

Speaking at a plenary session of the Valdai International Discussion Club, a Moscow-based think-tank Thursday, Putin hailed Modi as a “true patriot”, while asserting that the “future belongs to India”.

“We have special ties with India that are built on the foundation of really close allied relations for decades. We never had any difficult issues with India, we have always supported each other and I am positive that’s how it will remain in the future as well. PM Modi is one of those people in the world who is able to pursue an independent foreign policy in the interest of his country, and his people despite any attempts to stop him,” said Putin, responding to a question on the role he foresees for India in a “post-hegemonic world”.

Last month, Modi had told Putin that “today’s era is not an era of war” on the sidelines of the Shanghai Cooperation Organisation summit in Samarkand, Uzbekistan.

#Putin: We have special ties with #India that are build on the foundation of the really close allied relations lasted for decades#Russia’n President at the Valdai International Discussion Club meeting ➡️ https://t.co/WV47FL0cpH https://t.co/IYbM1iLpza pic.twitter.com/BBHrdZKEjQ

In the course of Russia’s nearly eight-month long war against Ukraine, New Delhi has repeatedly called for cessation of hostilities and restoration of peace, while avoiding issuing any direct condemnation of Moscow’s invasion.

These remarks come ahead of External Affairs Minister S Jaishankar’s visit to Moscow on November 8 to meet his Russian counterpart Sergei Lavrov.

On Wednesday, Russian Defence Minister Sergei Shoigu called up Defence Ministers of India and China to convey Moscow’s concern about a purported Ukrainian plan to use a “dirty bomb”.

In response, Singh reiterated India’s position, saying the conflict should be resolved through dialogue and diplomacy and that the nuclear option should not be resorted to by any side.

On Thursday, Putin said: “India has made tremendous progress in its development from being a British colony to a modern state. Almost one-and-a-half billion people, tangible results that give everyone respect and admiration for India. A lot has been done in the past years under the leadership of Modi. Naturally he is a patriot of his country. And his idea of Make in India, it matters. The future belongs to India. It can be proud of the fact that it is the largest democracy in the world and also be proud of its development momentum.”

Russian President Vladimir Putin, right, and Indian Prime Minister Narendra Modi pose for a photo shaking hands prior to their talks on the sidelines of the Shanghai Cooperation Organisation (SCO) summit in Samarkand, Uzbekistan, Sept. 16, 2022. AP/PTI

Putin claimed that based on a request from PM Modi, Russia has increased the supply of fertiliser to India.  “Prime Minister Modi asked me to increase fertiliser supplies which is crucial for Indian agriculture and we have done that,” he said, adding that the supplies have been increased 7.6 times without giving details.

On Tuesday, India had issued its second advisory in a week asking its citizens to leave Ukraine by all available means. It was primarily aimed at medical students who had returned to Ukraine to resume their education.

The latest set of advisories flagged a “deteriorating security situation” in the region where hostilities have escalated after the October 8 Kerch Bridge attack. The bombing of the bridge, which was attributed to Kyiv by Moscow, dealt a major blow to Russia as it had been using it as a route to provide regular supplies to its forces stationed in various Ukrainian cities from Crimea.

In response, Russia signalled that it was gearing up to escalate the offensive by targeting Ukraine’s energy infrastructure and declaring martial law in cities like Kherson.

Leaving nothing to chance, Sreejesh & Co. open Pro League campaign with an eye on World Cup