What is the future of democracy in the Philippines?

Philippine President Rodrigo Duterte has announced plans to run for vice president when his term ends in May 2022, raising concerns about how it could bypass presidential term limits and keep him in power, while granting immunity from criminal charges. President Rodrigo Duterte approved the recommendation of the Inter-Agency Task Force (IATF) to lift the current travel restrictions on India and nine other countries starting September 6.

Philippine President Rodrigo Duterte — who is allowed to serve only one term as president — has said he may consider running for vice president when his term ends next year.

Philippine President Rodrigo Duterte has announced plans to run for vice president when his term ends in May 2022, raising concerns about how it could bypass presidential term limits and keep him in power, while granting immunity from criminal charges.

“Consider me a candidate for the vice presidency at this time, maybe to maintain equilibrium for all,” Duterte told reporters last Thursday.

Philippine presidents are limited by the 1987 constitution to a single six-year term.

Under Philippine law, the vice president is elected separately from the president.

Those who serve in the post could potentially be propelled to the top role if the president dies or is incapacitated for any reason.

Duterte, a 76-year-old former mayor who made a name in politics with his extra-tough approach to crime, has gained notoriety for his profane rhetoric and contentious drug war, which claimed the lives of thousands of people in the Southeast Asian country.
Human rights organizations and civil society activists have slammed his government, holding it responsible for what they say is a culture of impunity. 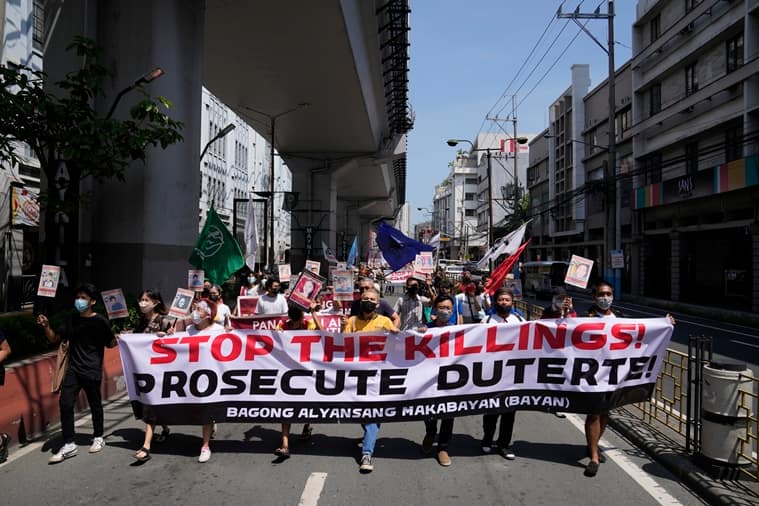 Protesters march during a rally outside the Malacanang palace in Manila, Philippines on Wednesday, June 30, 2021.(AP)

Last month, prosecutors at the International Criminal Court (ICC) announced their intention to open a full investigation into the brutal anti-drug campaign and the alleged unlawful killing of possibly tens of thousands of people.

The ICC’s outgoing chief prosecutor said last month that a preliminary examination found reason to believe crimes against humanity had been committed during the crackdown.

The prosecutor sought authorization to open a formal investigation and the court’s judges have 120 days to decide.

The court’s moves mean Duterte could face charges of crimes against humanity, although Duterte has said he would never cooperate in a possible ICC investigation.

Despite criticism from rights campaigners at home and abroad, Duterte’s popularity in the Philippines has remained high.

Duterte has a long track record of chipping away at democratic institutions.

His actions range from the closing of the largest broadcast media network to the passage of an anti-terror law that critics say institutionalizes a crackdown on dissent and thousands of alleged extrajudicial killings.

Political experts say that the Duterte administration simply exposed the fragility of the country’s democratic institutions. 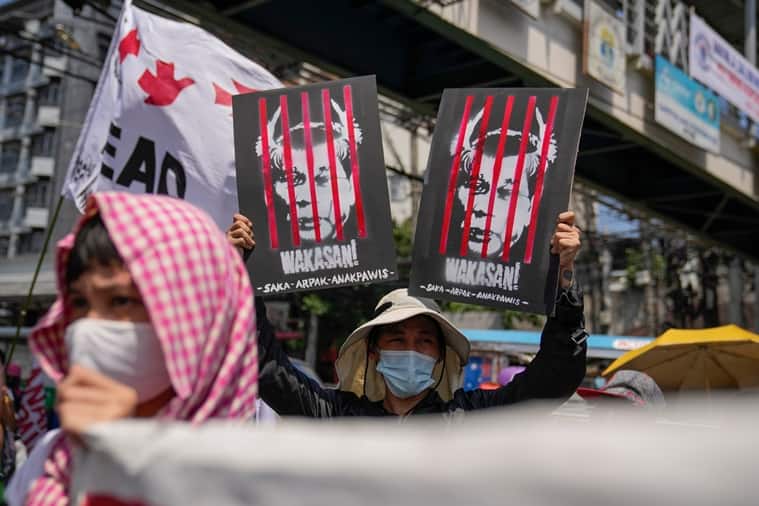 Protesters hold slogans bearing a caricature of Philippine President Rodrigo Duterte during a rally outside the Malacanang palace in Manila, Philippines on Wednesday, June 30, 2021. (AP)

The Philippines has a multiparty political system that critics characterize as “mere fan clubs” of politicians, who often switch parties for their own personal gains.

The allegiance of politicians and voters is based on political personalities rather than on ideologies.

Heydarian said that the defection of many members of Congress to Duterte’s ruling party after he won the 2016 presidential elections was facilitated by the absence of concerted institutional checks and balances. It also chipped away at democratic safeguards.

“The Philippines may look like a promising and beautiful democracy but institutions were really up for grabs by authoritarian leaders,” said Heydarian.

Centuries of colonial rule make the Philippines a young democracy. The country was under Spanish rule for over three centuries before control passed on to the United States, which granted independence to the Philippines in 1946.

Democracy took a downturn when dictator President Ferdinand Marcos declared martial law in 1972. The toppling of Marcos in a celebrated bloodless revolution in 1986 catapulted the widow of his main political opponent, Corazon Aquino, to the presidency.

However, succeeding administrations could not fix the systemic deficiencies of the multiparty political system or neutralize the dominance of political dynasties in government.

Political analysts say the outcome of the presidential elections in May 2022 will now determine the democratic trajectory of the country.

Sara Duterte, President Duterte’s daughter, and Ferdinand Marcos Jr., the son of the late dictator, are emerging as strong contenders for the highest office.

Marcos Jr. ran for vice president in the 2016 elections and lost by a razor thin margin.

“The Philippines is not a singular case. It is part of the broader trend of embracing authoritarian nostalgia and various forms of reactionary populism that we see in Asia,” Heydarian underlined, citing the recent military coup in Myanmar.

Turning the tide in favor of opposition

According to political strategist Alan German, the Philippines cannot continue on the same trajectory, which is fostering a culture of impunity and causing an erosion of democratic freedoms.

“It will take a strong and working opposition to counter this trend, but we don’t have that yet and well, the presidential elections are just around the corner,” German told DW. 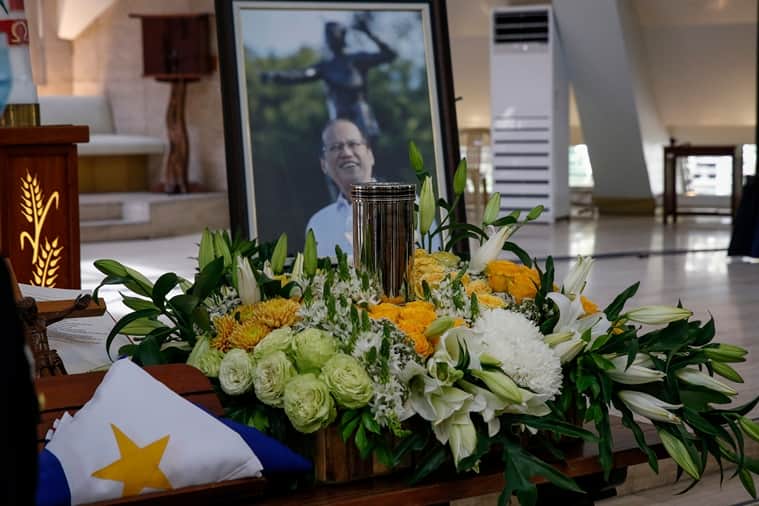 The urn of former President Benigno Aquino III is seen during a public viewing at the Church of Gesu of Ateneo de Manila University, in Quezon City, Philippines, Friday, June 25, 2021. (AP)

Vice President Leonor Robredo, who is the most prominent member of the opposition Liberal Party, remains reluctant to run for president.

However, the death of former President Benigno Aquino III in June and the outpouring of sympathy for him may have the potential to turn the tide in favor of the Liberal Party.

“Aquino’s death made a dent, but it is uncertain if it is enough. What is certain is that the Philippines cannot continue on this same trajectory of a culture of impunity and hatred of us vs them. I worry that civil unrest will ensue,” said German.

Social media manipulation or the use of fake accounts, trolls and bots to shift public opinion also plays a role in drastically shaping a political landscape where dissent is stifled.

“Social media manipulation strategies reflect a wholesale adoption of corporate marketing into the political realm. However, political marketing is like the wild, wild, west. It is unregulated,” Jonathan Ong, a research fellow at the Harvard Kennedy School, who has studied disinformation networks in the Philippines, told DW.

Social media and its algorithms enable the proliferation of disinformation, conspiracy theories and targeted harassment of individuals on a personal level. “This creates a climate of fear not just among journalists but also general citizenry to express legitimate dissent,” Ong said.

Indian team’s break in UK continues, players to get 2nd jab on July 7 and 9