The wave of civil disobedience is unprecedented in mainland China since President Xi Jinping assumed power a decade ago, as frustration mounts over his signature zero-Covid policy nearly three years into the pandemic. 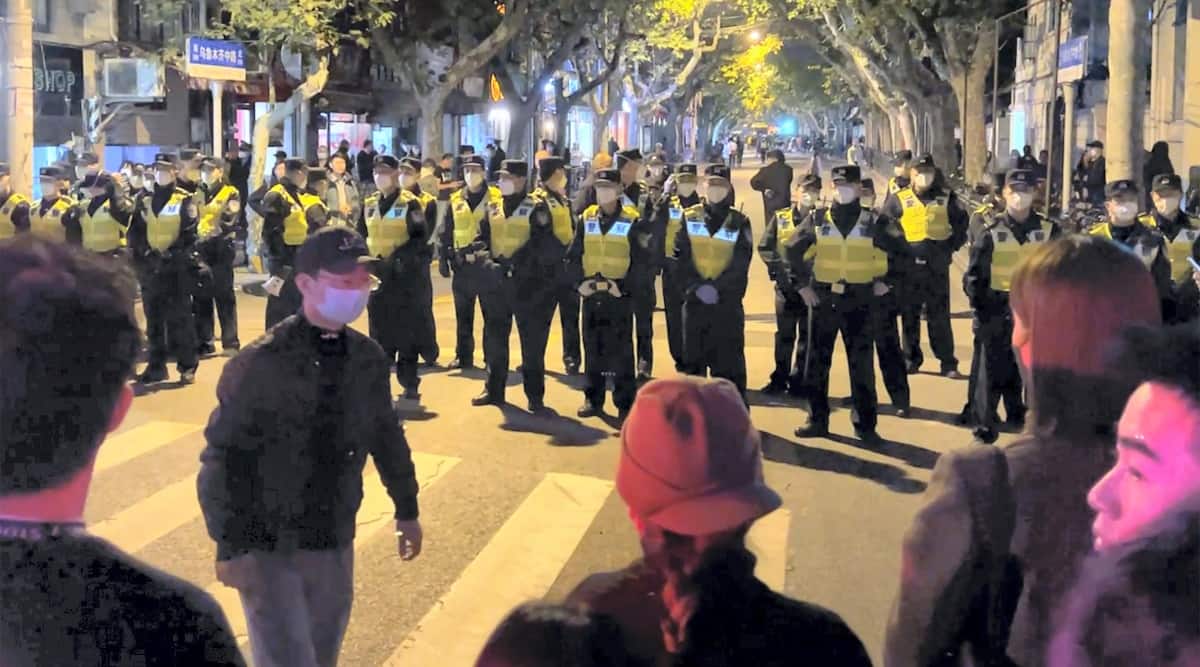 Chinese police officers block off access to a site where protesters had gathered in Shanghai on Sunday, Nov. 27, 2022. (AP/PTI)

Hundreds of demonstrators and police clashed in Shanghai on Sunday night as protests over China’s stringent Covid restrictions flared for a third day and spread to several cities in the wake of a deadly fire in the country’s far west.

The wave of civil disobedience is unprecedented in mainland China since President Xi Jinping assumed power a decade ago, as frustration mounts over his signature zero-Covid policy nearly three years into the pandemic. The Covid measures are also exacting a heavy toll on the world’s second-largest economy. Police officers detain people during a protest against coronavirus disease (COVID-19) curbs at the site of a candlelight vigil for victims of the Urumqi fire, in Shanghai, China in this screengrab obtained from a video released on November 27, 2022. (Reuters)

“I’m here because I love my country, but I don’t love my government … I want to be able to go out freely, but I can’t. Our Covid-19 policy is a game and is not based on science or reality,” said a protester in the financial hub named Shaun Xiao.

Protesters also took to the streets in the cities of Wuhan and Chengdu on Sunday, while students on numerous university campuses around China gathered to demonstrate over the weekend.

In the early hours of Monday in Beijing, two groups of protesters totaling at least 1,000 people were gathered along the Chinese capital’s 3rd Ring Road near the Liangma River, refusing to disperse. 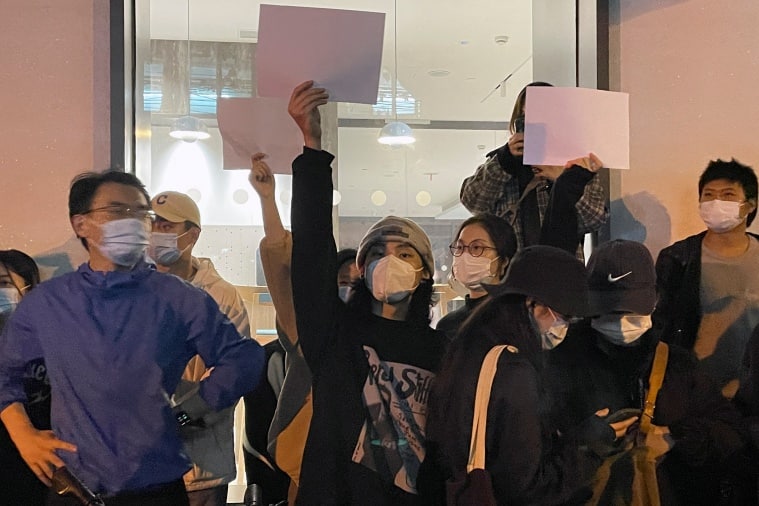 A fire on Thursday at a residential high-rise building in the city of Urumqi, capital of the Xinjiang region, triggered protests after videos of the incident posted on social media led to accusations that lockdowns were a factor in the blaze that killed 10 people.

Urumqi officials abruptly held a news conference in the early hours of Saturday to deny Covid measures had hampered escape and rescue efforts. Many of Urumqi’s 4 million residents have been under some of the country’s longest lockdowns, barred from leaving their homes for as long as 100 days.

On Sunday in Shanghai, police kept a heavy presence on Wulumuqi Road, which is named after Urumqi, and where a candlelight vigil the day before turned into protests.

Also Read |Xi stresses on ‘zero-Covid’: What’s China’s strategy and why has it been criticised?

“We just want our basic human rights. We can’t leave our homes without getting a test. It was the accident in Xinjiang that pushed people too far,” said a 26-year-old protester in Shanghai who declined to be identified given the sensitivity of the matter.

“The people here aren’t violent, but the police are arresting them for no reason. They tried to grab me but the people all around me grabbed my arms so hard and pulled me back so I could escape.”
By Sunday evening, hundreds of people gathered in the area. Some jostled with police trying to disperse them. People held up blank sheets of paper as an expression of protest.

A Reuters witness saw police escorting people onto a bus which was later driven away through the crowd with a few dozen people on board. 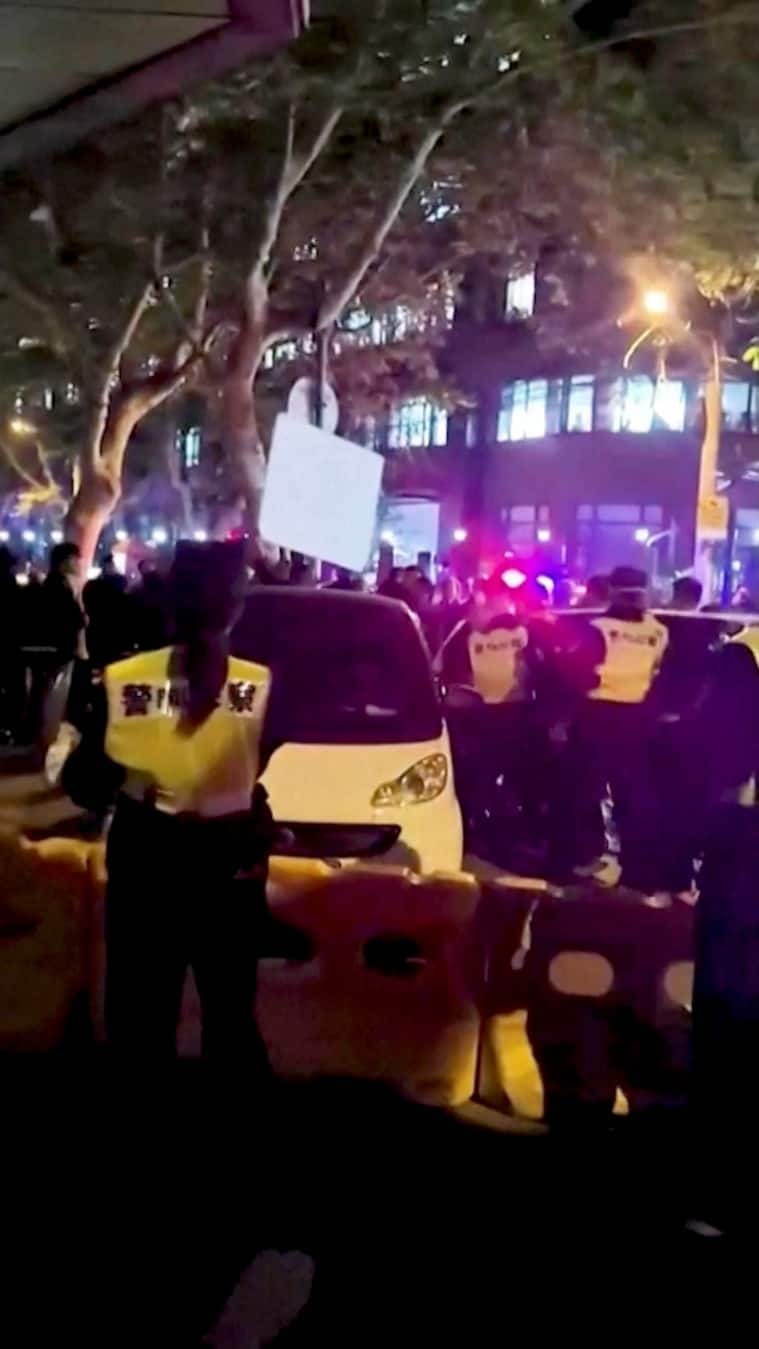 Police officers intervene as a demonstrator displays a blank board during a protest over coronavirus disease (COVID-19) restrictions, in Shanghai, China, November 27, in this still image obtained from a video. REUTERS/Staff

On Saturday, the vigil in Shanghai for victims of the apartment fire turned into a protest against Covid curbs, with the crowd chanting calls for lockdowns to be lifted.

“Down with the Chinese Communist Party, down with Xi Jinping”, one large group chanted in the early hours of Sunday, according to witnesses and videos posted on social media, in a rare public protest against the country’s leadership.

Thursday’s fire in Urumqi was followed by crowds there taking to the street on Friday evening, chanting “End the lockdown!” and pumping their fists in the air, according to unverified videos on social media.

On Sunday, a large crowd gathered in the southwestern metropolis of Chengdu, according to videos on social media, where they also held up blank sheets of paper and chanted: “We don’t want lifelong rulers. We don’t want emperors,” a reference to Xi, who has scrapped presidential term limits.

In the central city of Wuhan, where the pandemic began three years ago, videos on social media showed hundreds of residents take to the streets, smashing through metal barricades, overturning Covid testing tents and demanding an end to lockdowns.

Other cities that have seen public dissent include Lanzhou in the northwest, where residents on Saturday overturned Covid staff tents and smashed testing booths, posts on social media showed. Protesters said they were put under lockdown even though no one had tested positive. 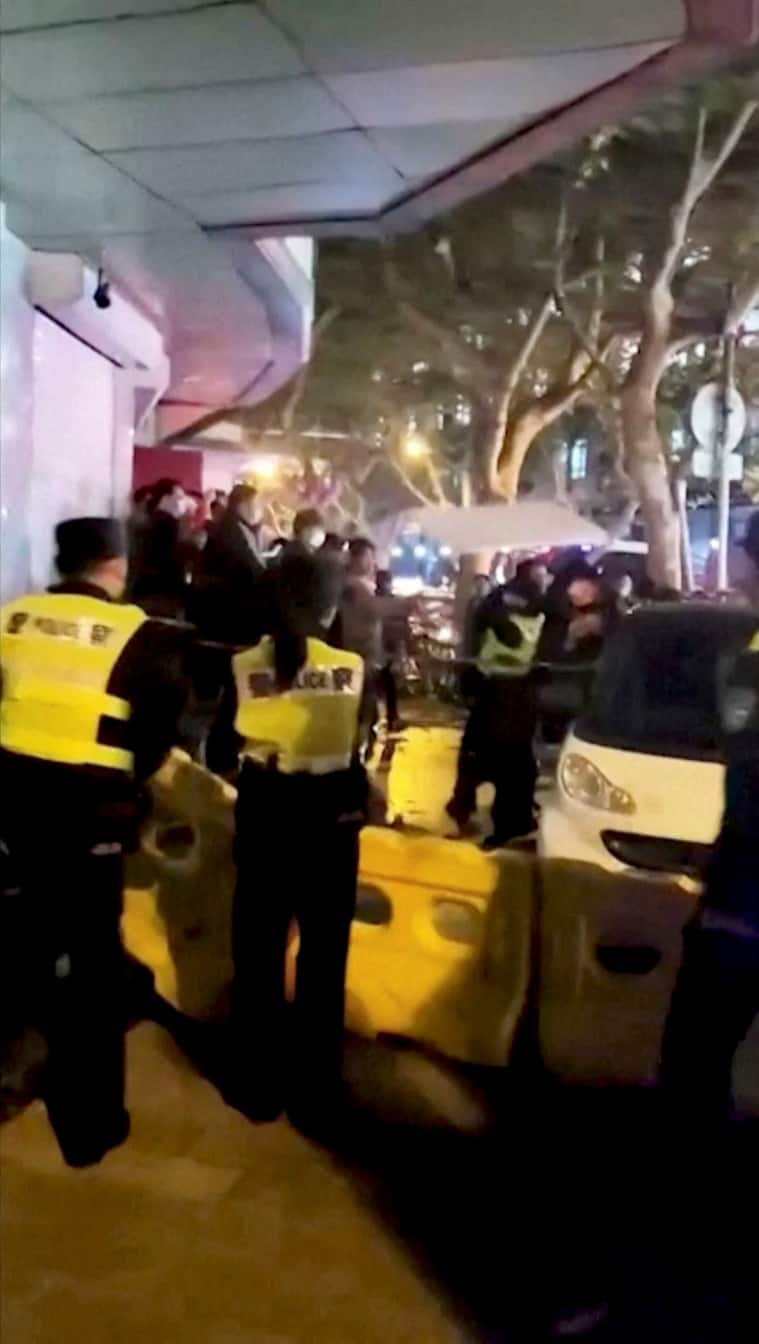 Police officers detain a demonstrator holding a blank board during a protest over coronavirus disease (COVID-19) restrictions, in Shanghai, China, November 27, 2022, in this still image obtained from a video. REUTERS/Staff

The videos could not be independently verified.

At Beijing’s prestigious Tsinghua University on Sunday, dozens of people held a peaceful protest against Covid restrictions during which they sang the national anthem, according to images and videos posted on social media.

China has stuck with Xi’s zero-Covid policy even as much of the world has lifted most restrictions. While low by global standards, China’s case numbers have hit record highs for days, with nearly 40,000 new infections on Saturday, prompting yet more lockdowns in cities across the country.

Beijing has defended the policy as life-saving and necessary to prevent overwhelming the healthcare system. Officials have vowed to continue with it.

Since Shanghai’s 25 million residents were put under a two-month lockdown early this year, Chinese authorities have sought to be more targeted in their Covid curbs, an effort that has been challenged by the surge in infections as the country faces its first winter with the highly transmissible Omicron variant.

Widespread public protest is rare in China, where room for dissent has been all but eliminated under Xi, forcing citizens mostly to vent their frustration on social media, where they play cat-and-mouse with censors.

Frustration is boiling just over a month after Xi secured a third term at the helm of China’s Communist Party.

“This will put serious pressure on the party to respond. There is a good chance that one response will be repression, and they will arrest and prosecute some protesters,” said Dan Mattingly, assistant professor of political science at Yale University.

Still, he said, the unrest is far from that seen in 1989, when protests culminated in the bloody crackdown in Tiananmen Square.

He added that as long as Xi had China’s elite and the military on his side, he would not face any meaningful risk to his grip on power.

This weekend, Xinjiang Communist Party Secretary Ma Xingrui called for the region to step up security maintenance and curb the “illegal violent rejection of Covid-prevention measures”.

PGI’s APC will have centre for bone marrow transplant