Pakistan Muslim League-Nawaz (PML-N) chief Shehbaz Sharif, who has already been named by the opposition as joint candidate for the new prime miniser, said the "new regime will not indulge in politics of revenge". 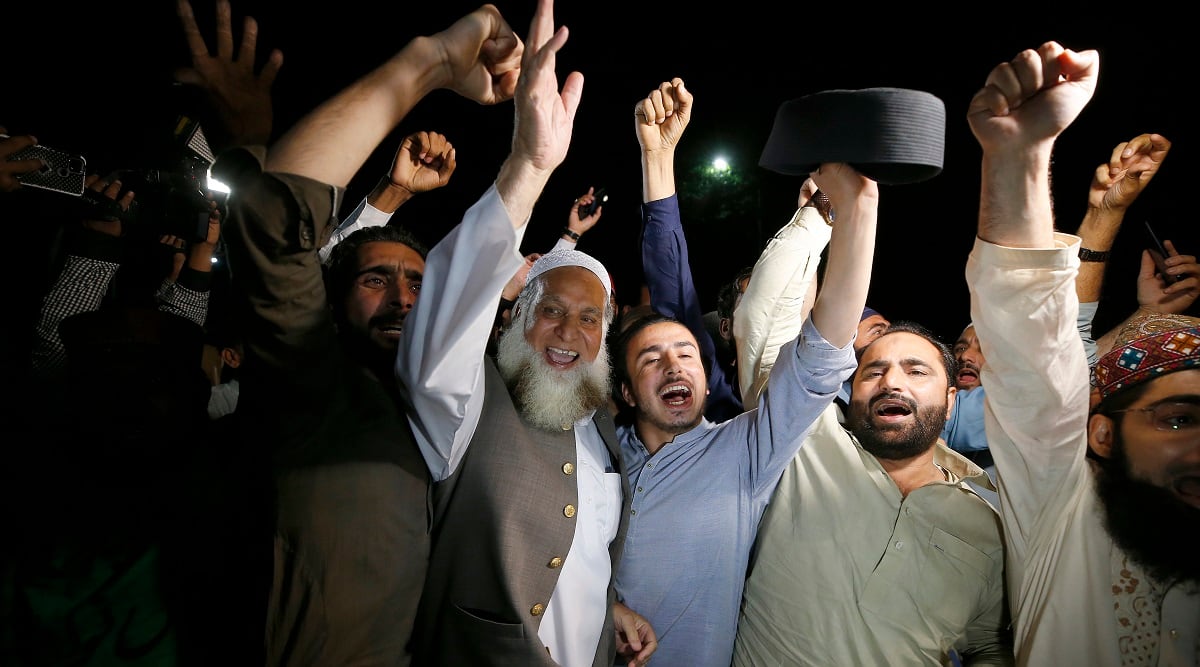 Supporters of an opposition party chant slogans as they celebrate the success of a no-confidence vote against Prime Minister Imran Khan outside the National Assembly in Islamabad. (AP)

In Pakistan’s first successful no-trust vote, cricketer-turned-politician Imran Khan was on Saturday removed as the country’s Prime Minister after the motion received the support of 174 members in the 342-member assembly.

The voting took place 10 minutes ahead of the midnight deadline, after Lower House speaker and Pakistan Tehreek-e-Insaf party member Asad Qaisar announced his resignation, handing over the charge to PML-N leader Ayaz Sadiq. The Pakistan Assembly is slated to meet at 2 pm on Monday to elect a new prime minister.

Pakistan Muslim League-Nawaz (PML-N) chief Shehbaz Sharif, who has already been named by the opposition as a joint candidate for the new prime minister, said the “new regime will not indulge in politics of revenge”. “Pakistan is now on the track of honesty and legality again…We are looking at a bright future where we won’t be vengeful and jail anyone who’s innocent,” he said.

Sharif told The Guardian that they would prioritise electoral reform, with a view to holding a general election “in due course”. “The country is in all sorts of mess, thanks to the epic mismanagement of the Imran Khan government. From paralysed bureaucracy to the foreign policy challenges to the broken economy, chaos is reigning supreme,” he added. In a tweet in Urdu, he wrote that Pakistan was “freed from a serious crisis” and congratulated the country on a “new dawn”.

Meanwhile, Pakistan People’s Party chairman Bilawal Bhutto Zardari took the floor after the no-trust vote and congratulated the house for passing a no-trust resolution against a premier for the first time in history. “Democracy was under attack for the last three years. Welcome to purana (old) Pakistan,” he said, taking a swipe at Imran Khan’s poll pitch of “Naya (new) Pakistan”. Democracy is a golden vengeance, he added.

Shahid Khaqan Abbasi, who was prime minister for nine months from August 2017, told DW that the vote was “an unprecedented victory for democracy and the constitution”. He thanked the judiciary and politicians who stood against the “unconstitutional act of Khan’s cruel regime”.

The PML(N) vice president and former PM Nawaz Sharif’s daughter Maryam Nawaz said that the darkest period in the history of Pakistan has come to an end. In a tweet, she wrote that the “country embarks on a difficult journey of repairing the damage Imran Khan has caused to Pakistan”.

The nightmare for my beloved Pakistan is over. Time to heal & repair.
Pakistan Zindabad 🇵🇰
Nawaz Sharif Zindabad ♥️

Alladolillahi Rabb-Al-Aalameen 🙏🏼
The darkest period in the history of Pakistan has come to an end. We bow our heads before The Almighty and pray for His guidance & success as we embark on a difficult journey of repairing the damage this man has caused to our homeland.

PML(N) leader Ishaq Dar said that “democracy and the constitution have triumphed and the dark age of fascism and lawlessness has reached its logical end”.

Meanwhile, PTI senator Faisal Javed Khan said the Imran Khan walked out of his prime ministerial residence “gracefully and he didn’t bow down”. The senator went on to say that he had “lifted the entire nation”. Khan has left the PM Office for his residence in Banigala, The Express Tribune newspaper reported.

Just saw off Prime Minister Imran Khan from Prime Minister House. He walked out gracefully and didn’t bow down. He has lifted the entire Nation. Feeling proud to be a Pakistani and blessed to have a leader like him. Pakistan Khan – Imran Khan

Khan, who came to power in 2018 with promises to create a ‘Naya Pakistan’, was dogged by claims of economic mismanagement as his government battled depleting foreign exchange reserves and double-digit inflation.